The Set of 400: #300 – My Favorite Healthy Choice Pudding Promotion 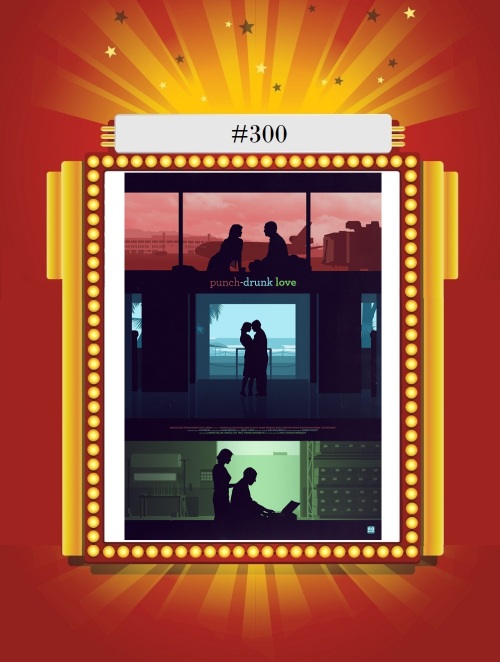 Paul Thomas Anderson’s smallest movie also easily qualified as his weirdest, until Inherent Vice came on the scene twelve years later. But this one is still pretty odd – Sandler (at his unhinged drama-comic best) plays a thoroughly damaged novelty item warehouse manager who simultaneously begins a relationship with a solidly damaged British women, while also contending with that most typical of film villains – scurrilous phone sex operators. He’s also got half a dozen sisters and periodically flies into violent rages, often at the expense of innocuous public restrooms or sliding glass doors.

The film features a weirdly wonderful use of color throughout

But, through Sandler’s amazing performance (yes, amazing!) you actually end up rooting for this psychological mess to triumph in the end. It’s not a particularly fun movie – at the same time it also isn’t the downer that it reads on paper. The love story is crazy, but it also really works. Sandler and Watson are a pretty well-matched team, and with Anderson’s sturdy guidance they make what could be a pitiable pair into a pretty endearing couple. Add in the quirky touches – he tinkers around with a tiny piano abandoned near the warehouse, he works to amass frequent flier miles by exploiting a wild pudding loophole – and another great PTA soundtrack memorably led by Shelley Duvall’s Popeye song “He Needs Me,” and you’ve got another great, if more divisive Anderson film.

This may just be from the people I’ve talked to, but of the eight Anderson movies, this one seems to be alternately the most disliked or the most disregarded. Is it Sandler? Could people not embrace him playing so far out of his norm? Is it that most of the characters appear to be somewhere on a spectrum of lunacy? Is it the comparatively narrow scope of the movie, compared to other PTAs? I’m not positive, but it really seems like you either love this movie, or you don’t care. And I do love this movie.

Some of the best grocery store dancing in cinema history

For those keeping track, yes, this is the third PTA film to make the list, landing him in the Director Three-Timer group with Hitchcock and Woody Allen, the main difference being the huge discrepancy in their respective outputs. Hitch directed at least 45 movies (many of his early works are lost now) and Woody has directed nearly 50 – PTA has made eight features as of this writing, six of which were eligible for this list, five of which made it (sorry, Hard Eight!). Still, 5 of 6, that’s as good a ratio as you’ll find in this stretch of film ogling. In #315 The Master and #380 There Will Be Blood I’ve mentioned my opinion about Anderson’s position among the world’s directors (er, at or near the top), and I will no doubt get into this topic again, but not for a little while. Stay tuned!

Punch-Drunk Love also inducts four of the cast into the Two-Timers acting wing – Philip Seymour Hoffman (I didn’t even mention PSH’s work in this movie! Phenomenal stuff!) coupling this PTA with his other PTA list spot in The Master, Mary Lynn Rajskub, the only formal actress portraying one of Barry’s sisters, also had that bit role in the seminal Tom Green movie of our time, #348’s Road Trip, and Luis Guzman and Sandler, co-starring again the following year in a more typical Sandler vehicle, #368 Anger Management.

Fun fact – this is the only PTA film since 1997 (This again excludes Hard Eight! And that’s a pretty good movie, despite these omissions!) to receive no Oscar nominations. It did get Sandler a Best Actor Comedy/Musical Golden Globe nod though – to date, his only Globe nomination. Don’t cry for Opera Man, though – he has been nominated for a ridiculous 19 MTV Movie Awards. That’s not nothing!

Coming tomorrow! All this has happened before, and it will happen again, but this time it happened in London –