Paris! or How I Failed at Vacation, Photographically Speaking

Ah, Paris! The City of Lights! It really is a gorgeous sight to behold. But you wouldn’t know it looking at our photographs. I don’t know what the hell happened to my skills behind the lens, maybe it was that long flight, maybe it was all the wine, but man, these pictures le suck! Hugely disappointing. Still! I didn’t want to deprive anyone of all the highlights of our glorious adventures in ancient France, so here we go! 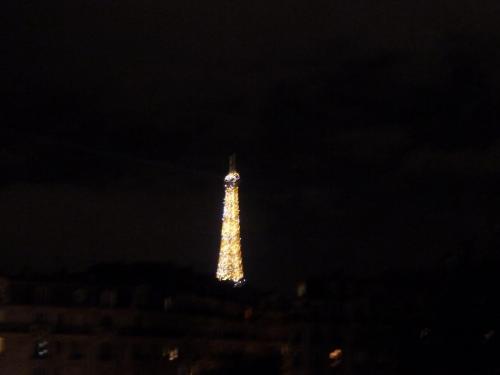 Jesus. We took so many goddamn pictures of the Eiffel Tower, and do you think any of them came out worth a damn? Wait, here’s another one:

Well that’s kinda better, but not really. You see, after bawling out the staff at the hotel for the better part of an hour, the wife got us a room with a view of the tall flashy thing, so naturally we attempted to photograph it for the keepsake album like a hundred times. And the best we came up with?

Well, it’s smaller, but it’s not quite as blurry

Nuts. Ah well, that’s not all there is in Paris! Plenty of sights to see! The Louvre, for example! That great repository of world art, crammed into a building that once housed kings, with iconic design and legendary grandeur. That must’ve been good for a few clicks of the old Kodak, huh?

If you squint you can just make it out

I mean, I thought we stood in front of that goofy glass pyramid for a while, but wouldn’t you know, the pictures come back from Walgreens with this as the lone proof we stepped foot in the building. Okay, that’s not true. Like all tourists, once we got inside we made a bee-line for that masterwork of Leonardo da Vinci, the painting that has launched a thousand debates and provided a plot for the most overrated book of the last thirty years (it’d be longer, but, you know, Jonathan Livingston Seagull exists). I’m speaking, of course, of the Mona Lisa. I battled the other tourists and came away the victor!

I swear that’s the actual painting! I didn’t photograph a page in a book!

“Ooo, what about the cemeteries?” I hear you ask. “You run a hugely popular and mind-blowingly successful Death Pool, do you not?” Oh, readership, you know me so well. Yes I do, so naturally we checked out the gorgeous places of final repose in old Lutetia. They aren’t like the American mom-and-pop, uniform tombstone and floral arrangement cemeteries you find in your Elmira, New Yorks and your Indianapolis, Indianas. No, they are ridiculous over there! 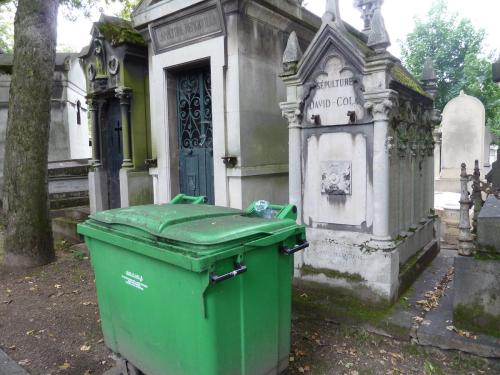 I don’t think there’s a body in that dumpster

Seriously, I was all around this thing. The Plexiglas reflections were unavoidable

You got me. Nice details, I guess?

“But aren’t there a bunch of celebrities buried in Paris? Jim Morrison? Victor Hugo? Chopin?” There sure are! And while selfies at gravesites can be a bit tasteless and gauche, we still tried to sneak a pic with the monumental structure of one of my favorite writers – Oscar Wilde!

I guess it was karma what undid our plan

“Er,” I can hear you muttering disappointedly. “Didn’t you get any pictures of exciting Parisian life? Of the parks? Of the cafes?!” Hell yes we did! Let me see now, what’ve we got showcasing that bustling, joyous metropolitan experience? Hmm…

The door was open, so we figured it was cool to pop in

That’s The Polidor! Hemingway ate there! No bullshit!

We went to Versailles at the end of the week, the gorgeous palace, with all the art and the gardens and whatnot – you know the one I’m talking about. That should’ve provided pictures all by itself enough to stuff a Shutterfly book. I mean, I remember seeing a bunch of cool shit there.

Awful lot of glare on this one. Couldn’t they put a layer of gauze or something over it?

Just a couple of bros enjoying their victory

On the tram to the Grand Trianon. Look at that marvelous shoulder!

And this…hell, this could be anywhere, I guess

Crimeny. Wasn’t there anything cool in Paris? How could one person so badly botch taking pictures of a city full of landmarks and history? Just point your camera at the old structures and the river and you’re set! Nope, I thought I’d be all fancy and artistic, and what happens?

Oh, I’ve got it, the redeeming moment. Notre Dame! The grand cathedral! 850 years old and still as beautiful as the day she turned 18! There’s no way – NO WAY – to screw up pictures of that old broad. Inside and out, that place is made for shutterbugs. Let’s see, what’ve we got from the Ile de la Cite?

With all the arches and columns and Christ littering the interior, this is what we came away with? Who is that guy? Why was his creepy coffin/coffin-esque tomb the thing to land on the roll of film? Man. This is embarrassing. Now, wait, I know I got a picture from outside, I remember that distinctly. The towers! The exquisitely ornate doors! The buttresses! 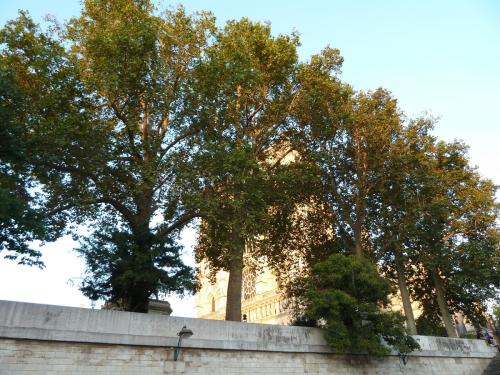 Well, it just goes to show, not everyone can be Margaret Bourke-White.

Oh, wait, I’ve got like five more disposable cameras here I didn’t develop. I’m such a dunce. I’m sure the good pictures are on there. They must be. Right?

3 responses to “Paris! or How I Failed at Vacation, Photographically Speaking”