The normally peaceful all-things-X-Files convention Shipper-Con was rocked this past weekend by controversy and destruction, as a barrage of statements from series creator Chris Carter and subsequent rioting by the paying attendees nearly resulted in Vancouver being placed under martial law.

Carter stated unequivocally that he believes the show went “off the rails” when they decided to hook the main characters up.  He blamed this, surprisingly, on the fans.

“Why anyone would want to see Mulder and Scully together romantically is beyond me,” Carter said to the packed auditorium.  “I mean, what’s wrong with you people?  Mulder is a single minded, paranoid, porn lover.  You think that’s appealing in a man?  Plus, during the course of the series nearly all of Scully’s family died because of this guy.  Is that endearing?  You fans, you wanted to see this happen, and David thought he was going to be a movie star or something and leave, so we sold out.  I sold the premise of the show right down the damn river.  Thanks a lot, fans.  Great work.”

The uproar following this was quieted momentarily so Carter could continue.  “Seriously?  You don’t see what a mistake it was?  We were a show about government conspiracies and alien abductions and monsters in the closet, and you folks just wanted an FBI soap opera.  And then no one watched the end of the show!  Some fans we’ve got, jeez.  You people, I swear to God.”

Shipper-Con, in its formation, was steeped in the idea that the show, as Carter once put it, was “always a romance.”  Carter, however, has reversed his stance 180 degrees apparently.

“The X-Files is as much a romance,” Carter shouted about the rising cacophony, “as that rip off bullshit Bones is a quality evening of television.”

The hall was immediately emptied in an effort to limit damage, and Carter was whisked away under guard so as to prevent his disembowelment.  Once outside, the crowd’s fury began to mount.

“How could he say something like that?” asked Samantha Dubus, 28, creator of the YouTube video showing Mulder wiping barbecue sauce off Scully face in Red Museum at varying speeds to all three movements of Brahms Piano Concerto No. 1 in D Minor.  “We’ve stuck it out all these years waiting for a new movie, which I’m going to see a dozen times no matter what, and he belittles us?  We’ve even pretended all these years that Post Modern Prometheus is a good episode just because Chris directed it and loves it.  Well no more!  Post Modern Prometheus sucks!”

Members of The X-Files creative team were quick to try and diffuse Carter’s statements.  Director Frank Spotnitz, long considered the biggest Shipper (Pro-Mulder/Scully/Relationship) of them all, spoke later the same day.

“I think Chris was just blowing off some steam,” Spotnitz said.  “Fox backed out of making the Millennium movie, and Chris, well, he doesn’t have much else going on.  So he took it out on the fans.  Sorry, fans.  I’ll screen my private collection of cut scenes and some video storyboards of Mulder and Scully making out hard for you guys later on.”

But these scenes of agent-on-agent action didn’t manage to quell the fans increasing rage.

“We come here every year to celebrate The X-Files and our shared MSR beliefs, and this is how Chris treats us?” said William Kolchak, 31, webmaster of the X-Files site diefowleydie.com.  “And it’s not just the Mulder/Scully Shippers either.  We’ve got Drippers (Doggett/Reyes) here, Skimmers (Skinner/Mulder), Milkers (Mulder/Krychek), Ressies (Reyes/Scully), Peckers (Pendrell/Kirsh), and even some SkinCovers (Skinner/Covarrubias) I think.  It’s all about love!  And he pisses all over us!  Bastard!”

The crowds swirling around the Vancouver Convention & Exhibition Centre became so agitated and hostile – chanting alternately “1013 Sucks!” and “Sure! Fine! Whatever!” – that planned appearances by the show’s stars, David Duchovny and Gillian Anderson, were cancelled, further stoking the flames of dissention.

“Now we won’t get to see Gillian maybe pick lint off David again!” an inconsolable girl in a Non-Fat, Tofutti, Rice Dreamsicle shirt wailed.  “This is too much!  Too much!”

While the fans continued to march in the streets, some huddled in corners whispering of a nefarious plot afoot.  Not unlike an episode of the show itself, the scene quickly took on an air of conspiracy and paranoia.

“Someone better check Chris for implants, stat,” intoned Langley-portrayer Dean Haglund, holding court and signing autographs in the parking lot.  “I’ve got a feeling they got to him.”

“They who?” a wide-eyed fan asked in a whisper.

“Who else?  The government.”

“Your Kung Fu is the best,” the fan responded.

“You better know it,” Haglund told him. 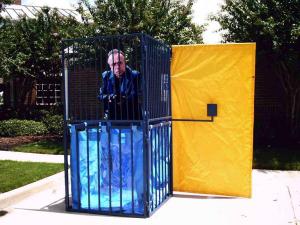 The Convention never totally got back on track, even if some events did take place as scheduled.  Screenings of gag reels from seasons four and five were interrupted repeatedly by sounds of cars being overturned outside, but the Dunk Frohike tank was more popular than ever, as fans took out their aggression on the diminutive Lone Gunman.

“They do a Dunk Chris tank next year, they’ll be able to pay for another movie from the proceeds,” Frohike (Tom Braidwood) explained from his perch.  “Everyone coming up is cursing about him and what he – (*splash*)”

For his part, Carter was unapologetic.

“Look, in an effort to appease those goddamn people, I bastardized the show and injected all this kissing, and that stupid baby.  I mean, why did they have a baby?  What is this, Thirtysomething?  Do I regret it?  Hell yes I regret it!  Every minute of every day.  To try and sell tickets I’ve been toeing the party line, but that’s over.  The hell with these Shippers.  The hell with them all.”

And yesterday, Carter’s Los Angeles mansion burned to the ground.