Today! Because communism was just a red herring –

In the very limited realm of Movies Based on Board Games, Clue is far and away the king. It’s not a genre that should’ve necessarily been encouraged to expand, and thankfully it hasn’t managed to in the three plus decades hence. On the other hand, why not? While most board games don’t present enough characters or plot to facilitate a real story to emerge, I’m sure they could come up with something halfway decent for, say, Candyland. Who do you see playing Plumpy in that one? Someone get a treatment together!

Yikes – I didn’t make this graphic – this was actually in development at some point. Gah.

END_OF_DOCUMENT_TOKEN_TO_BE_REPLACED

Today! Because conversation like television set on honeymoon – unnecessary –

Neil Simon’s epic comedy mashup of legendary 20th century mystery novel sleuths is half brilliant, half standard Neil Simon-esque jokes, with a like 20% horribly racist overlay. It was the ’70s, and I know that’s no great excuse, and you had master of accents and buffoonery Peter Sellers as Charlie Chan-lite Sidney Wang, but that’s also no great excuse. Wang has some funny lines – not just funny accent bits – but it’s not for today’s audience, I’ll readily admit that.

However, Niven and Smith as Dick and Dora Charleston, Peter Falk’s Sam Diamond, James Coco’s Monsieur Perrier, and Elsa Lanchester’s Jessica Marbles take off wonderfully on Nick and Nora, Sam Spade, Hercule Poirot, and Miss Marple. The plot revolves around a secluded mansion where the detectives have been gathered to solve a murder by their host Lionel Twain, the ultimately murdered man, played fairly tongue-in-cheek by Truman Capote. It’s absurdist zaniness, with the house functioning very much as a character itself, moving rooms at will and facilitating numerous attempts on the detectives’ lives. It’s basically a wilder take on Clue, just ten years earlier and with only one ending.

END_OF_DOCUMENT_TOKEN_TO_BE_REPLACED

Today! Because I’m using rented bullets for my gun. We’ve all got problems –

A spiritual sequel to the zany Neil Simon comedy Murder By Death, The Cheap Detective is a more direct parody than its predecessor, taking Peter Falk’s twisted Bogart impression and slamming Casablanca, The Maltese Falcon, and The Big Sleep together into one silly 1940’s San Francisco mystery, replete with Nazis, secret identities, Romanians, stolen treasure, and an acronymed pseudo-villain named Vladimir Tserijemiwtz, which works out to Ezra C.V. Mildew Dezire Jr.!

Many members of the large cast appeared in Murder By Death as well, including Coco, Brennan, and Cromwell, but Falk’s is the only character transplanted over more or less intact, even with a different name (Lou Peckinpaugh here, Sam Diamond in Murder). These movies are in the rare group of Neil Simon screenplays that weren’t adapted from his stage plays, which includes The Out-of-Towners, The Goodbye Girl, and Seems Like Old Times. They do, however, have that indefinable Neil Simon-ness about their jokes, which mostly land, even if they can verge into mild racism here and there. Ah, the 1970s! 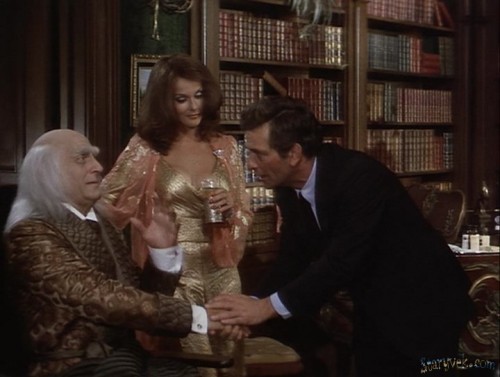 And some vintage Sid Caesar shtick!