Today! Because I was an honest man, straight as an arrow. I had to come to prison to be a crook – 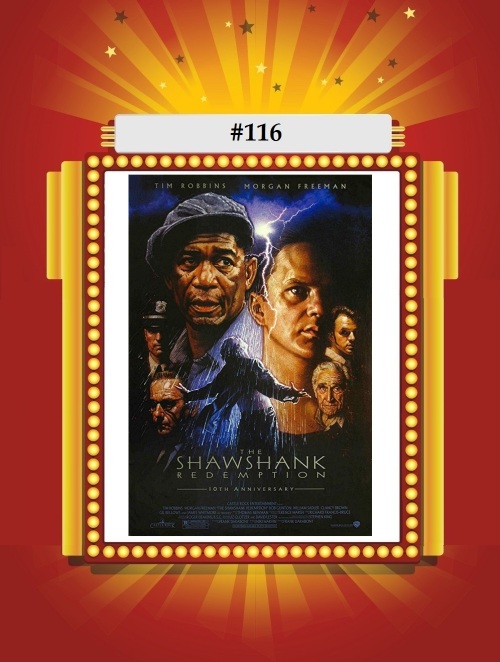 How great a year for movies was 1994? It was so great that The Shawshank Redemption – by popular acclaim the greatest movie ever made, if IMDB ratings are to be believed – is my sixth favorite movie from that year. Sixth! ’94 was so great that even though it was plenty revered in its day, there was no hint whatsoever of it actually winning Best Picture. Hell, it didn’t really win anything – only nominated for Screenplay and Actor for Freeman at the Golden Globes, it then picked up a slew of Oscar nominations, including Picture, Screenplay, Actor (Freeman again), Cinematography, Sound, Film Editing, Score – and lost every single one. It was named one of the ten best movies of the year by the National Board of Review, and did enter the National Film Registry in 2015, so that’s something, but for a movie that to a man everyone agrees is beyond words great, is basically perfect, it had the huge misfortune of being released in one of the the four or five best movie years ever. Hard luck, Shawshank!

END_OF_DOCUMENT_TOKEN_TO_BE_REPLACED

Like most eighth graders, I had a big JFK assassination phase. It was probably prompted by this movie, but there also was a lot of new press swirling around the event at the time of movie’s release, so maybe a combination of the two. Figure, even though the movie very directly covers the trial of Clay Shaw, it also proposes a lot of theories regarding the assassination that maybe hadn’t been widely disseminated, or widely considered, before then. So the press around it was crazy, and 12-year-old Joe got sucked in. I distinctly remember prowling Holy Rosary’s dinky library trying to uncover all the details I could find, in encyclopedias, mostly (shoutout to my long closed middle school!). END_OF_DOCUMENT_TOKEN_TO_BE_REPLACED