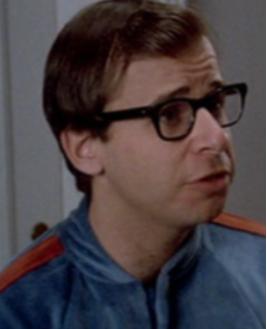 You want to be Peter Venkman. Venkman was the only cool guy in the entire movie. It doesn’t get much better than Bill Murray doing his thing at the expense of whoever he shares the screen with. Everyone agrees on this – if you played that game with a group of your friends (“If this was Lost, I’m clearly Charlie!”) about Ghostbusters, everyone hopes their friends would go “Well, you’d be Venkman.” But no, you’re not, you poor delusional slob. None of us are. We’re Louis Tully.

“What?” you ask, outraged. “Louis?!” Yes. Louis. Egon was a goddamn genius. You might think you’re smart, and you might well be, but you’re not Egon. You’re not even Ray. He was the top man in his field almost without question. He didn’t have Egon’s overall brilliance, but he was still the driving force in all their paranormal dealings. You are not the top man in your field. Face it and accept it. And Winston? The paycheck Ghostbuster? No, you’re better than that. Come on! I mean, in the grand day-to-day soul crushing grind, maybe we all collectively identify best with Winston, but deep down, heart of hearts, in your soft squishy soul made of hopes and nougat, you’re Louis Tully, CPA. We’re all Louis Tully. And it’s high time we acknowledge it.

Louis isn’t a sexy pick  to identify with as a fictional character. Hell, most people wouldn’t even take him as their Rick Moranis spirit animal. That would almost certainly be Dark Helmet, or Bob McKenzie from Great White North. Or at least Barney Coopersmith from My Blue Heaven. But Barney Coopersmith was just a socially adjusted Louis Tully, don’t you see? Somewhere in the back of your mind, while desperately searching for order and truth in your life by way of the Rick Moranis oeuvre, you identify with Louis. Your heart makes a connection that your mind strenuously denies. 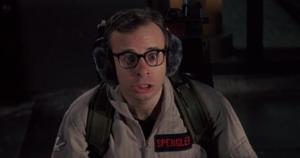 Why Louis Tully? He’s Johnny-on-the-spot. He’s the Keymaster. He’s adaptable to the needs of your franchise. By Ghostbusters II, he’d magically morphed into an attorney, primarily because the story needed a funny attorney. Later he straps on the proton pack and goes to battle because there had to be some distraction from the over-dark goings on in the museum. Sure, there’s no actual benefit to what he does. The crowd loves him and cheers the destruction of that plasma shell thing, but he had no real effect on it whatsoever. But can you begrudge Louis his moment in the sun? Heck no you can’t. Just like landing Janine instead of his longtime object of affection Dana, the residuals work out just fine for our man Louis.

In the face of the Terror Dog, what does he do? Does he cop an attitude? Does he try to get tough with it? Nope, he checks his pockets for a milk bone! Aren’t we all just searching for that elusive milk bone when confronted with horrors and unimaginable obstacles? You can shout at the heavens and curse the fates, or you can take your good-natured stab at placating the monster with the metaphorical milk bone.

Okay, maybe stick up for yourself a little.

The best example, though, of Louis Tully as the world’s object of admiration is during his stretch possessed by Vinz Clortho, demi-god and Keymaster of Gozer. During this period of the film, Louis – a nerdy nebbish type – morphs into…a dim bulb demi-god looking for the Gatekeeper. It’s a search for love! Even if it’s just physical love, with the product being Gozer the Destructor. In the novelization of the movie, it is stated that Vinz is imbued with the strength of the Vuldronaii, and that his mind is full of the glory of the Shagganah and all of the Myriad Sacred Forms of the Torb. But, laden with otherworldly powers, what does Vinz Clortho really do? Nothing much. Hangs out with Egon. Mistakes a horse for Zuul. “Yes, have some!” The basic sweetness of his Louis Tully form renders the Keymaster ineffectual. He doesn’t begin laying waste to the confused people he encounters. He makes a few vague threats, based mostly around recounting the greatness of Gozer:

“Gozer the Traveller, he will come in one of the pre-chosen forms. During the rectification of the Vuldronaii, the Traveller came as a large and moving Torb! Then, during the third reconciliation of the last of the Meketrex Supplicants they chose a new form for him, that of a Giant Sloar! Many Shubs and Zulls knew what it was to be roasted in the depths of the Sloar that day, I can tell you.”

Louis Tully, such a good-natured, good-hearted individual that he manages to delay the rampant decimation of New York City all the way until Zuul freaks out when the containment unit blows, blasting a gaping hole in the apartment building, he tracks her down, they get to some hot Keymaster-on-Gate Keeper action, and the Traveller has come. 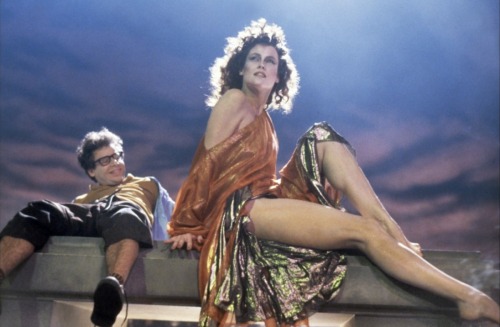 The world needs more Louis Tullys. I’m one, you’re one, we just all need to live a little bit more like one, you know?

2 responses to “Louis Tully: An Appreciation”