Me and My Nineteen (Remaining) Clones 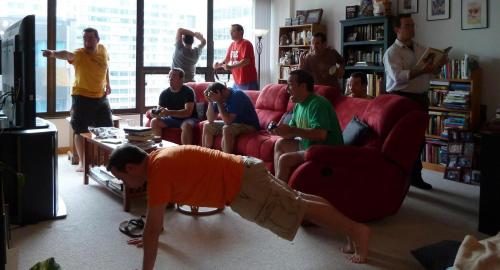 Everyone thinks it must be so cool, having a bunch of clones. That’s what they always tell me. You’ve got this big pack of friends, you can play crazy tricks on girlfriends and neighbors, and you can test drive different hair lengths and styles without messing up your own head. Also (the way it was described to me early on) you’ve got a huge supply of spare organs, an enormous wardrobe, and multiple doppelgangers means high unlikelihood of assassination. It’s been a weird life.

The clinical story has been recounted by the press and biographers hundreds if not thousands of times, but here it is right from Patient X. I’m Stevie and I’ve got nineteen (remaining) clones.

I was born in 1995, a full year before that stupid sheep. After finding that I was genetically ideal, they took my cells and spun off a whole bunch of dupes. The intention wasn’t to have fifty dudes who all looked the same wandering around – they only expected a few to survive, not unlike that dumb sack of mutton (eat it, Dolly!). But despite expectations the human success rate was way higher, so for the last thirty years I’ve had dozens of identical pals, of varying intelligence and mood, hanging around me.

Well, mostly identical. The fact of the matter is, these clones are all sorts of messed up by now. Mentally they’re slipping like middle-aged office drones, and more than a few of them have osteoporosis. It’s a symphony of groaning and wheezing every morning. So a few of them changed quite a bit and don’t look anything like me anymore. Sure, there have been some tough years, but shit, one looks like a Muppet! And one is the spitting image of George Raft! Walking and talking in black & white, no less!

The media got a bunch of stuff wrong. That first biography – 1998’s My Twin’s Twin’s Twin’s Twin’s Twin – was probably best, but even it said that because they were cloned as babies they probably wouldn’t live beyond a few years, having something to do with their telomeres or something. Ha! Complete bullshit!

In 2014 came the more lurid book, Forty-Five Versions of Stevie’s @#%! written when we all hit 19 and there were finally some interesting sex stories to add. That damn thing was like 75% lies, though. We let it slide. It made a couple of the clones look like studs, and they refused to sue. Willington (Clone #13) and Krisflyer (#50) in particular got a ton of ass from that book. They’re both gone now. Them and twenty-four other guys. They are still underfoot like chihuahuas, but Jesus Christ, there used to be a whole lot more of these mirror faced bastards.

Most of the clones? Dumb as rocks. Not to disparage them – they’re a pretty nice bunch of fellas – but they bought into the whole “You’re not going to outlive a guinea pig” story early on, and so they screwed around for the past three decades. I went to college and got an education and a decent work-from-home stock brokering job – even though I am generously subsidized by scientists – but these lazy clones just play grab ass at the bar and work on their Grand Theft Auto progress. Plus, we all still live together! Do you know what a pain in the ass it is to live with nineteen guys who look alike? Frustrating!

Maybe because the unanticipated end could be around the next bend of the hour, the clones have gotten a bit clingy. The bedroom is mine – always has been – and we’ve got makeshift Murphy beds everywhere. The shower alone pulls out into four mattresses and eight teddy bears. Nonetheless, it’s a rare morning that I don’t wake up draped in clones. They’re like a pack of scared puppies in a lightning storm.

But I get their concern. Physically they’re not the healthiest bunch, and the mortality rate over the past eleven years has been pretty shocking. Four days ago I turned thirty, September 1st, 2025, which means all these guys are turning thirty in the next week. That’s a tough time for anyone. But it’s even tougher since we lost Fredward yesterday. He was just grabbing the mail (in the buff, as was how that guy partied) and next thing you know his heart took off out of his chest like a missile. That puts us at eighteen now.

Mamma, don’t let your babies grow up to have clones. It’s a lot of heartache, plus the food bill is outrageous.

I wanted to set the record straight here, and cut through all the rumors. There is no organ farming going on after all, and no serious mutations have taken place (Hensonite and Kinescope aside). Things are fairly normal here at Chez Stevie, at least as much as can be expected. Well, I’ve gotta get back to movie night – it’s The Prestige, and I’m concerned the guys will get bad ideas.

2 responses to “Me and My Nineteen (Remaining) Clones”