Today! Because I was going into Tosche Station to pick up some power converters! 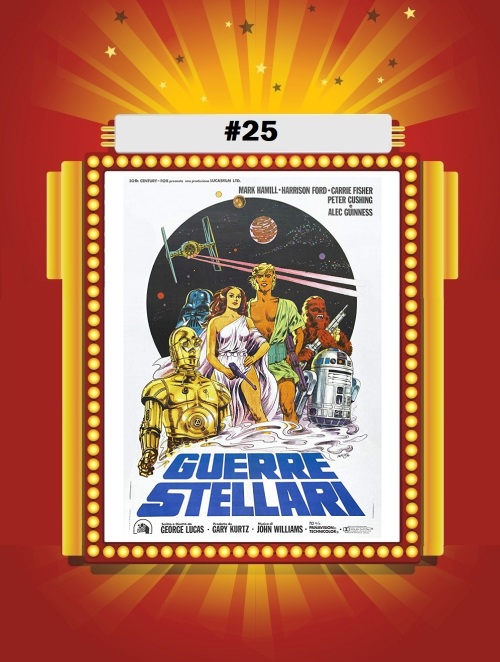 There is literally nothing I can write about Star Wars from a film perspective that hasn’t been written before. As I’ve stated a bunch of times, this is almost certainly the movie I’ve seen the most times in my life – I can’t even fathom a guess how many. 200 times? More? We had this recorded from television when I was a kid, and watched it so incessantly that I still remember the odd pre- and post-commercial bits that were included in that pirating. They interviewed random early ’80s celebrities about the film – or probably their favorite characters, as those are the quotes I remember. Magic Johnson saying “I dug R2” and Bruce Boxleitner’s “Han Solo had a wit -” and then we cut the commercial. I wonder if these are on YouTube anywhere.

Also, to this day, I can’t hear the 20th Century Fox fanfare without expecting the Star Wars theme to follow it. So far as my brain is concerned, these are the only movies Fox put out in the last fifty years. And really, now that they are under the Disney fold, can they just throw the Fox music back in front of the new Jedi flicks? Just for my cerebral chemistry’s sake? END_OF_DOCUMENT_TOKEN_TO_BE_REPLACED

Today! Because these humans are beginning to bore me –

A good case for being the only solid movie starring Big Blue ever made, Superman II‘s production history is as entertaining as the movie itself – what with the crazy plan to film it concurrently with the original film in 1977 and ’78, the scrapping of this plan partway through, the firing of original film director Donner, a bunch of the actors quitting – including Hackman, requiring massive rewrites and doubling, the death of some key crew members, the lawsuits by Marlon Brando and against Christopher Reeve, and the fact that despite all this turbulence – and replacement director Lester’s decidedly different spin on the sequel – virtually everyone you talk to agrees that this movie is far superior to the original.

You know what? I’m good.