Today! Because these humans are beginning to bore me – 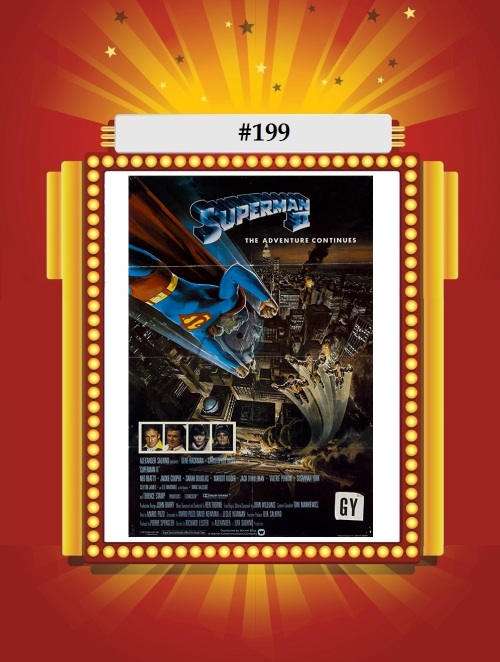 A good case for being the only solid movie starring Big Blue ever made, Superman II‘s production history is as entertaining as the movie itself – what with the crazy plan to film it concurrently with the original film in 1977 and ’78, the scrapping of this plan partway through, the firing of original film director Donner, a bunch of the actors quitting – including Hackman, requiring massive rewrites and doubling, the death of some key crew members, the lawsuits by Marlon Brando and against Christopher Reeve, and the fact that despite all this turbulence – and replacement director Lester’s decidedly different spin on the sequel – virtually everyone you talk to agrees that this movie is far superior to the original.

You know what? I’m good.

Which always made the internet push to see Richard Donner’s cut of the film all the more mysterious to me. It’s not like people prefer Superman I – okay, sure, maybe a few people do – so why was the idea out there that this other version of II was this lost treasure? And once it finally saw the light of day – in a mid ’00s DVD release – the reception was pretty much a collective “Huh.” The reviews are largely the same as the original, and few if any try to make the argument that the film is improved. I’m gonna admit – as of this writing I’ve still never watched the Donner recut – seriously, why would I? It would be like finding out Ridley Scott directed half of Aliens and was replaced by James Cameron. I preferred Aliens to Alien to begin with, so what would I care about Scott’s continuing vision? As a novelty, sure, but for the mania around it to be what it was – I never understood.

And yes, Superman II still has problems – I’m guessing there is just no perfect way to bring this character to the screen. It got close, but there is that pointless interlude where Superman gives up his powers while the world unknowingly burns, and then just immediately gets them back. I get it – it sets up the ending – but it feels wholly, ridiculously unnecessary crammed into that second act. And then there’s the big cellophane S – a new power never explained and never used again. And there’s all the marketing during the Metropolis street fight, especially the Marlboro tractor trailer, which isn’t even a legal thing to exist in America, then and now. It’s kinda gross.

But I like the wacky, slapstick two minutes that appears out of nowhere during that fight, I don’t care what you say. Even watching this movie to death as a kid, it never felt totally right – immediately after Superman is erroneously declared dead – that a guy would be eating an ice cream cone like twenty feet away, and it gets blown into someone else’s face. That’s ridiculous. But hell, that whole run there is pretty entertaining. Get over yourselves, purists!

While I’m tempted to award film MVP to that guy on the payphone who gets blown over during the wacky comedy portion of the film – and just keeps talking and laughing – instead I’m going with the dude who kicks Clark Kent’s ass in that diner – Rocky, played by Pepper Martin!

“Come and get it, four eyes”

Coming Monday! What? You went over my helmet?!?