Today! Because I was going into Tosche Station to pick up some power converters!

There is literally nothing I can write about Star Wars from a film perspective that hasn’t been written before. As I’ve stated a bunch of times, this is almost certainly the movie I’ve seen the most times in my life – I can’t even fathom a guess how many. 200 times? More? We had this recorded from television when I was a kid, and watched it so incessantly that I still remember the odd pre- and post-commercial bits that were included in that pirating. They interviewed random early ’80s celebrities about the film – or probably their favorite characters, as those are the quotes I remember. Magic Johnson saying “I dug R2” and Bruce Boxleitner’s “Han Solo had a wit -” and then we cut the commercial. I wonder if these are on YouTube anywhere. 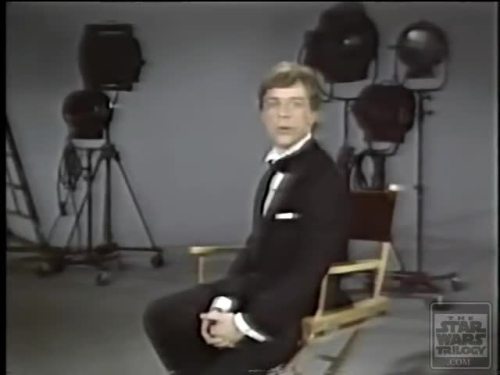 Also, to this day, I can’t hear the 20th Century Fox fanfare without expecting the Star Wars theme to follow it. So far as my brain is concerned, these are the only movies Fox put out in the last fifty years. And really, now that they are under the Disney fold, can they just throw the Fox music back in front of the new Jedi flicks? Just for my cerebral chemistry’s sake?

Like many folks who grew up with this movie, I became increasingly disgruntled at Lucas’s continued tinkering with the movies, to the point that you still can’t (as of this writing) get a decent, legal DVD/Blu Ray of the first trilogy the way it was originally created and consumed by the countless millions from ’77 to, say, ’90ish. However, ol’ Joe came up with a workaround to this a few years back. I got my hands on a DVD burner not built into an old desktop with a disc drive, and came up with the idea to snag some old VHS tapes of the original trilogy (look, I know this could’ve been done on a computer, but I’m no longer savvy enough to put in the sort of Googling required to figure that out). But what I found after getting these old versions on discs – so that I can now watch them without fear of my VCR exploding and/or eating them – is that hacky sub-SD versions of these movies do not trump the over-edited, jam-packed-with-pointless-monsters-and-whatnot versions. This should’ve been obvious from the start, but for so long I was hung up on the idea of having the original films in the original versions (did I really remember what the Death Star exploding looked like from when I was a kid??) that I chased this down. Worth it? Meh, probably not, but come on, Disney/Fox, do the right thing here.

Hell, I even wanted the original over-edited versions from ’97 – just leave some of this shit alone!

And it wasn’t just the trilogy we watched – no, for us the Star Wars films were four – including the ABC television mess The Ewok Adventure, which appears to have first aired right around Thanksgiving 1984, about nine months after Star Wars got a network TV broadcast, if my Googling is correct. That means we didn’t have all that long with just Star Wars, and it’s entirely likely we only had these two movies for some period of time, as I have no idea when we got Empire and Jedi recorded. Can you imagine – we only had A New Hope and The Ewok Adventure?? That can’t have lasted long, but still!

Much later – 2002ish, maybe? – I also acquired the original trilogy on laserdisc, which was a Quixotic adventure I went on in the early ’00s. DVDs were solidly in the marketplace by this point, but we didn’t have Blu Rays yet, and the going rumors swirled about how much better laserdiscs still were compared to the new-ish digital medium. So, with eBay firmly a part of my life, I tracked down a player (no mean feat in ’02) and went to a few going-out-of-laserdiscs-business sales (including the Scranton Public Library’s), and amassed quite the collection. Not to get too into the weeds on this, but former rental laserdiscs did not hold up well, and so they were a pretty hit-and-miss bunch as far as even working. The laserdisc player, similarly, was already a decade old when I got it, so in short order this whole experiment went kerblooey. However, as I said often at the time, this was the last, best way to view the original trilogy before it would completely change in ’97 and continually from that point. So if you have the patience and resources, go get yourself a laserdisc player and these discs!

One somewhat forgotten tidbit regarding the original film might be just how exciting the re-releases were in 1997. I believe this was my first experience seeing an older film readily available on home video in a movie theater – still living in Scranton and this practice not being widespread outside big cities. I was in my senior year of high school, and this resurgent Star Wars mania caught fire that January. The re-released special edition ended up the eighth highest grossing movie of the year, and by itself was the 61st top grossing movie all time when it closed (I guess they broke it out separate because of the, like, two added scenes?). Plus, very briefly, A New Hope had regained its ’77 to ’83 status as the highest grossing movie ever, passed by E.T. that January – a spot it held for fourteen years. Less than a year later, James Cameron’s boat sunk and the record book went up in ice. Still, man, I was so excited for the re-releases, and Star Wars built up a ton of audience goodwill again, which it promptly squandered (for some) two years later, with The Phantom Menace.

Not with me, though!

This is George Lucas’s Two-Timer induction, as he also helmed the above Jar-Jar-sterpiece, making him the 85th club member! And considering this is the fourth and final Sith flick on the list, we’ve got a ton of advancing acting guild members, most notably Eight-Timers Han (#53 Empire, #86 Jedi, #230 Blade Runner, #201 Fugitive, #71 Last Crusade, #66 Temple of Doom, and #175 Patriot Games) and Leia (Empire, Jedi, #146 Blues Brothers, #259 Soapdish, #151 When Harry Met Sally, #180 Hannah and Her Sisters, and #208 Jay and Silent Bob) – Carrie Fisher tying Madeline Kahn for most actress appearances on the list overall!