Today! Because we have top men looking into it –

Many, many films from my childhood fought their way onto this list – some decent and still relatively high in my estimation, some Howard the Duck – but none wind up above the utterly perfect first Indiana Jones adventure. I haven’t the slightest idea the first time I watched this movie, and can’t even realistically guess how many times I’ve seen it, but despite the decades wearing on and all the changes in film and my personal preferences, the greatness of this movie has never abated. Even my reasons for liking it haven’t changed all that much. Figure, The Muppet Movie still finds a high rank due mostly to my enduring love of the brand – as a kid, I think it was a lot more the silliness and the songs. Jaws I don’t think I saw uncut until well down the road, so it’s kind of a different movie for me as an adult. But Raiders is the same slam-bang, non-stop action thrill ride its always been, and it totally still holds up.

As I think I mentioned back in Temple of Doom, for a period of time growing up I thought this was the second film in the series, as the concept of a prequel was beyond me and the establishing dates to open these films set them up in this order. I guess the logic was…they didn’t want us to wonder why Indy and Marion weren’t still together? Why they didn’t mention the Ark of the Covenant while battling possessed children and eating monkey brains? It seems like a concept overthought, really, because Temple doesn’t give us any added insight to Indy that informs something in Raiders, like most prequels do. I guess it was so we might like Willie better. Couldn’t Kingdom of the Crystal Skull have both Karen Allen and Kate Capshaw return? That might’ve been more interesting than the bizarre mess they hurled at us instead. Geriatric love triangles! At least they could’ve returned Short Round.

END_OF_DOCUMENT_TOKEN_TO_BE_REPLACED

Today! Because after all, Amity means friendship –

What can I say? Some of my favorite movies are everyone’s favorite movies. I’m not above such a thing. My go-to 4th of July movie forever, Jaws was another household staple growing up, which seems a bit off as an adult, given its generally terrifying plot, but as a kid it was more a bunch of fun shouting and running on the beach. Plus, as mentioned way back in #353 Jaws 2, we used to watch both movies together pretty often – to the point that some details from one bleed into the other – and the sequel is decidedly kid friendly, even with the higher body count and more visibly menacing shark. All of those cool, wise-cracking teens!

Sure, they aren’t distinct characters, but they are having so much teenage fun before they start getting eaten!

I more like to believe that the original movie is so great it actually transcends age barriers and in-depth understanding. While watching it as an adult is a complete cinematic experience, with tremendous performances and incredible tension, the more childlike manner of viewing a film works too. Take Jaws apart and reassemble it in any order and it still delivers pretty solidly. The driving narrative almost doesn’t matter. One scene you’ve got Quint scratching a chalkboard and dealing with the stuffy town leaders, then you’ve got the shark eating him, then Hooper joking that all the guys on that overloaded boat are gonna die, then Brody making faces with his kid, then that girl gets pulled under by the unseen monster to open the film – any order, all the scenes are entertaining. Yes, even Mrs. Kintner losing her shit all over Brody.

END_OF_DOCUMENT_TOKEN_TO_BE_REPLACED

Today! Because it’s okay, mom, we’ll check it out – 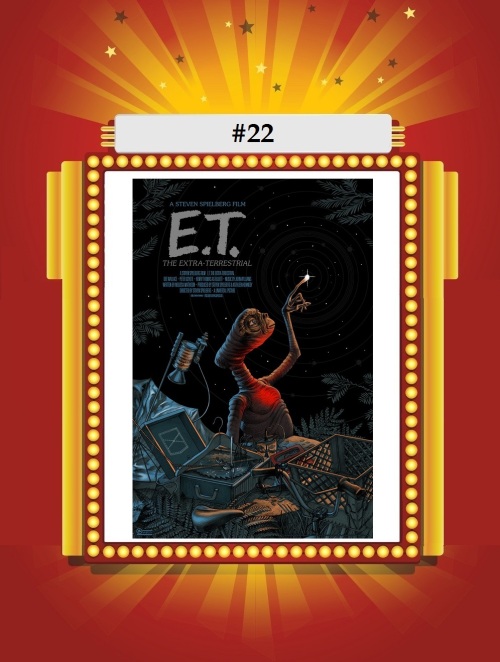 I enjoy box office records, much like some sports purists live and die with baseball statistics. A small group of us have participated in this box office pool for well over a decade, which added a new fun wrinkle to things, but I’ve followed these numbers for a long, long time. The Scranton Times used to run a weekend Top Ten gross section, which was the only way for me to track this until I subscribed to Entertainment Weekly around 1993. And it would be another five or six years until I got full exposure to this data on the internet, in the form of Box Office Mojo, which I would guess is my fourth or fifth most frequently visited website to this day (alongside the Recent Deaths section of Wikipedia, IMDB, Instagram, and maybe Yahoo Sports, in that order). And for all the formative years of my box office interest, E.T. was the top film. From 1983 to 1997, it was the highest grossing movie ever, unadjusted, and is still in the top twenty, as of this writing. Adjusted, it’s the fourth biggest moneymaker ever, only behind Gone With the Wind (a movie so popular it was one of the top five grossing movies of the years 1939, 1940, 1941, 1947, 1954, 1961, 1967, and 1971), Star Wars, and The Sound of Music.

Atlanta was aflame again with the GWTW premiere in ’39!

END_OF_DOCUMENT_TOKEN_TO_BE_REPLACED

Today! Because I know, we are Your chosen people. But, once in a while, can’t You choose someone else? 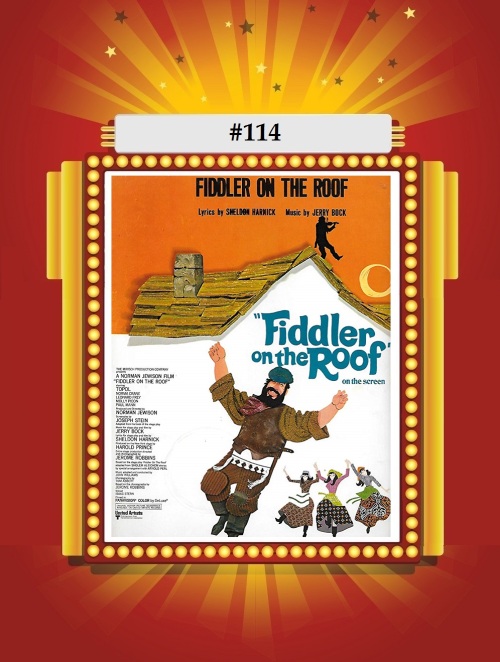 There are plenty of movies with music still to come, and a bunch of films that could be classified in some way as movie musicals, but as far as stage adaptations to the big screen, Fiddler on the Roof is my second favorite, apparently! How about that build up with little payoff? I would also contend that it is the best musical adaptation ever made, fully realizing the vast number of ’60s Best Picture winners this shoves behind it – your Sound of Music, Oliver!, West Side Story, My Fair Lady, etc.

Most stage adaptations – no matter how hard they try to update and rearrange them for film – still have a nearly unbreakable staginess to them. While this doesn’t bother me much with plays-to-screen, musicals are such a grander experience in general that they need to really open up and do dramatically different production and sound designs, to try and utilize the medium to support the unnaturalness of spontaneous songs. I’m not saying a bunch of other movies haven’t done this well – the staging of 2012’s Les Miserables is incredible, even if the movie just missed this list – but I genuinely can’t remember a movie that worked better in this regard than Fiddler.

And that’s with all the fourth wall breaking going on. On stage, it works fine – breaking the fourth wall is such a standard convention in theater that it’s not disconcerting. And, okay, strictly speaking that’s not what’s going on here either (he’s talking to God, but in the direction of the audience/camera, so…) but it could’ve been a disaster. However, Topol’s brilliant work as Tevye – commanding, charming, sympathetic, and yet massively flawed – gives the on-screen narration a peculiar authenticity, and helps immerse us into the early 1900s Russian village of Anatevka.

The Music Box in Chicago has taken to screening this movie on Christmas Day, which is a tradition I can get behind