Today! Because after all, Amity means friendship –

What can I say? Some of my favorite movies are everyone’s favorite movies. I’m not above such a thing. My go-to 4th of July movie forever, Jaws was another household staple growing up, which seems a bit off as an adult, given its generally terrifying plot, but as a kid it was more a bunch of fun shouting and running on the beach. Plus, as mentioned way back in #353 Jaws 2, we used to watch both movies together pretty often – to the point that some details from one bleed into the other – and the sequel is decidedly kid friendly, even with the higher body count and more visibly menacing shark. All of those cool, wise-cracking teens!

Sure, they aren’t distinct characters, but they are having so much teenage fun before they start getting eaten!

I more like to believe that the original movie is so great it actually transcends age barriers and in-depth understanding. While watching it as an adult is a complete cinematic experience, with tremendous performances and incredible tension, the more childlike manner of viewing a film works too. Take Jaws apart and reassemble it in any order and it still delivers pretty solidly. The driving narrative almost doesn’t matter. One scene you’ve got Quint scratching a chalkboard and dealing with the stuffy town leaders, then you’ve got the shark eating him, then Hooper joking that all the guys on that overloaded boat are gonna die, then Brody making faces with his kid, then that girl gets pulled under by the unseen monster to open the film – any order, all the scenes are entertaining. Yes, even Mrs. Kintner losing her shit all over Brody.

Because even though Jaws is rated PG (Even with the Kintner boy exploding in a fountain of guts!), it is a rough adult movie. A bunch of people get killed, even if you mostly just see the jacked up corpses (or the reactions to them), and the harrowing final act is almost non-stop horror. I don’t remember the first time I saw this movie, such a frequently played classic as it was at home, so I would imagine its actually worse if you don’t know how it turns out. Is that why it’s generally considered an all ages affair? The finale is exciting, and Quint is markedly doomed from his first appearance, so all’s well that ends well? Seriously, why is this movie rated PG?

I mean, think of the children!

But, if it had received its justified R who knows when I might’ve seen it. I mean, my parents weren’t super hung up on these sorts of things, but I distinctly remember them cracking down after all the boobs and blood on display when we rented Nightmare on Elm Street 3: Dream Warriors. Maybe they just didn’t like slasher films? Also, I doubt Jaws would’ve achieved its brief summit of the all-time box office with an R (but maybe – Godfather had managed the task). On the other hand, with no PG-13 existing in 1975, did it really deserve an R? There’s no cursing (usually the most obvious thing to get the harsher rating) and very limited nudity (which is usually enough by itself), and violence barely registers as a concern (America!), so…they made the right choice? I feel like I came all the way around on that opinion. It’s just not a PG movie, is all I’m saying.

Of all the great things springing from the existence of Jaws – the modern summer blockbuster, the entire summer movie season in some ways, the career of Steven Spielberg, the shark eating the helicopter in Jaws IV – perhaps the most touchingly significant was wider knowledge of the plight of the USS Indianapolis. Quint’s feverish tale while out on the open water is basically true, and an oddly unsung moment in naval history prior to this movie. Now, you can go to Indianapolis (which is a better time than you’d immediately imagine) and see a memorial to this event! Dedicated in 1995, it doesn’t mention Spielberg’s contribution to this monument, nor does it credit Bruce (the nickname for the original film’s shark) with making all this happen. 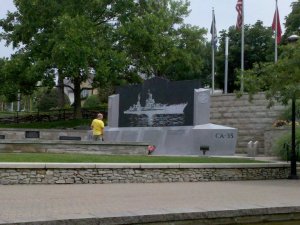 And look, I had some concerns when compiling this list upon discovering half of my top favorite movies being among the most popular films of all time. It kind of makes the whole thing a bit pointless, doesn’t it? Congratulations! You’ve figured out the conceit of this entire multi-year enterprise! I doubt there are really any surprises remaining on this list, if you’ve been paying any bit of attention to my general preferences to this point. But I wanted to be honest – if I shoehorned random foreign classics or obscure Sundance flicks into the top of this list to look sophisticated, it’d be braggadocios at best and legitimately undermining to the whole exercise, which is far worse. I’ve asked people randomly what their favorite movie is for years, and I appreciate dumb popcorn responses far more than folks who claim, say, The Seventh Seal or Enter the Void. Seriously? Those aren’t your favorite movies – you want those choices to say something about you, but what they say is you might be a colossal phony. Take that!

Just admit you love Bumblebee and be done with it!

And so I’ve got Jaws all the way up at #7! It’s a movie I literally never tire of, and is one I’m almost guaranteed to watch every year, which is a pretty exclusive group. What are the drawbacks to this movie? Maybe that you don’t see the shark all that often? Is that something that bothers you? It’s way more suspenseful this way! Maybe Hooper is annoying as shit? Yeah, okay, but look at the balance you get with Quint in the final act! Maybe Chief Brody shouldn’t be the top lawman on an island when he doesn’t like the water? That’s fair! But then look how it heightens the tension of the big showdown! There’s nothing wrong with this movie. I’ve got nothing to point to. It’s also my go-to example when people claim the book is always better than the movie – this movie is so much better than Benchley’s hacky beach read as to put them in different wings of the art museum. Spielberg’s Jaws is the Venus de Milo; Benchley’s Jaws is a sign directing you to the gift shop.

The original cover is kinda cool, though

This is Spielberg’s twelfth list film, tying him again with Woody Allen for the top spot. However, one of those dozen is only a segment of a film – his Twilight Zone sequence – so if we’re being fair, Woody probably still should be credited with the most movies on this list, as Steve only really has eleven and a quarter. But is this his last appearance? Can he snatch the crown away here in the final days?? Stay tuned! We’re almost done!

Coming tomorrow! You know what I am? I’m a dog chasing cars. I wouldn’t know what to do with one if I caught it –