Today! Because they think he’s a righteous dude –

Before moving here, if you’d asked me what movie is most associated with Chicago, I might’ve said The Blues Brothers. Maybe The Untouchables, given people’s endless fascination with the town’s mob history from eighty years ago. But having lived here for over a decade now, I can tell you hands down what’s considered the most Chicago-y movie of all time, by visitors and residents alike, is Ferris Bueller’s Day Off. I know this should’ve been obvious – it’s basically a non-stop travel video for the greatest city on Lake Michigan – but I guess I didn’t think it had a universal appeal to audiences of all ages. Or maybe it’s just that the movie is old enough now that its become a beloved classic, and thus can be enjoyed by all demographics. Either way, there are yearly celebrations and special anniversary events about this movie – last year they recreated Ferris’s bedroom in…a hotel downtown, I want to say? Googling… 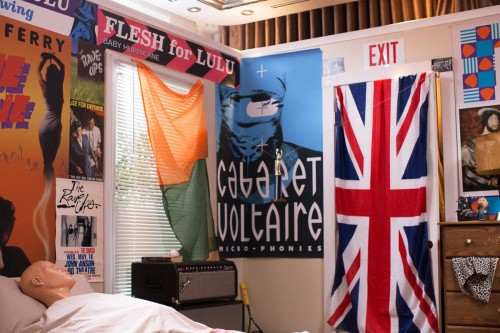 The Virgin Hotel, summer of 2018! Oddly, I find this has been done a number of times in various cities, but still

And yes, this too feels like a home movie! Even though it was filmed 20+ years before I got here, it has a Chicago-timelessness to it, as the places they visit and the things they do aren’t particularly dated to the mid-’80s (except maybe Ferris’s bedroom). The Art Institute (once named by TripAdvisor as the best museum in the world, ahead of MoMA and the Louvre) has largely the same paintings, Wrigley Field looks a little different but is still so distinctively Wrigley as to not be mistaken, and the Sears Tower Skydeck is basically the same, on three sides anyway (the fourth side added a terrifying glass floor jutting out from the building). Plus most of the buildings and sculptures during the parade – while there are plenty of new structures by the river, and the parks changed pretty considerably since ’86, the Loop itself has remained fairly constant. Come visit! You’ll see!

The world’s most beautiful skyline – your differing opinion is incorrect

I’ve never been a huge John Hughes guy – this is his second and final film on the list – but I firmly believe Ferris Bueller to be his masterpiece. I was a little too young to really appreciate his earlier teen comedies – your Breakfast Clubs and Sixteen Candles and whatnot – but between his directing efforts that made the list, plus his screenplays for Home Alone and Christmas Vacation, along with near misses The Great Outdoors and…Dutch? I guess I’m more a Hughes fan than I realized. During the course of this paragraph, I’ve come all the way around. Huge John Hughes fan. Nonetheless, nothing he did is as perfectly wonderful as this movie. From Broderick and Ruck’s terrific interplay to Jeffrey Jones amazing roiling meltdown of a performance as Principal Rooney to giving Ben Stein name recognition as a comedian to the best thing Charlie Sheen ever did, this movie is jam packed with entertainment. Hell, it even has those emotionally resonant third act moments – Cameron and the car, Ferris and Jeanie’s sort-of reconciliation – so as to not just be gags, chases, and vicious dogs.

There are plenty of MVP options – from the dynamite leads down to Edie McClurg’s terrific work as Rooney’s secretary – but I’m going with Jennifer Grey’s finest hour this side Baby in the corner. Between her unfettered rage at Ferris’s sympathetic outpouring to kicking Rooney in the face to her great scene with the Ma-Sheen in the police station, she bolsters a solid B plot (C plot, even) into what you wish was a movie unto itself.

Hughes is our 75th Two-Timer director, following #373 Planes, Trains, and Automobiles! Landmark day! A bunch of actors are joining or advancing on that side, including Broderick finally getting a non-animated film appearance, but Jeffrey Jones leads the group, heading to the Fours after #346 Howard the Duck, #220 Without a Clue, and #122 Beetlejuice. Spotlight!

And yes, he’s had some pretty troubling run-ins with the law, but he plays a great asshole principal

Coming tomorrow! You once were a ve-gone, but now you will begone –