Today! Because I wouldn’t wipe my feet on him if he were starving, and I hope he is –

The fifth and final Lombard to make the list, and the one that made her a star, Twentieth Century hits that sweet spot of mine being a movie about plays and also tangentially about movies, replete with ridiculous over-the-top theater people delivering headspinning dialogue from Oscar winners Ben Hecht and Scranton’s own Charles MacArthur. This movie is also directly responsible for the inclusion of the later Lombard flick True Confession – as that movie reunited this film’s stars, largely because Barrymore was falling on hard times and she insisted he get cast, a move that elevated the picture above her more standard light comedy of that time.

Here Barrymore is unquestionably the lead, playing theater maven Oscar Jaffe who discovers Lombard’s Mildred Plotka, changes her name to the more palatable Lily Garland, and makes her a stage sensation. After their relationship cracks up, she goes Hollywood and transcends Jaffe in every conceivable way. It’s very A Star is Born, the first official version of which didn’t come out until 1937 (What Price Hollywood? – the real original original Star is Born – came out in 1932, though). The main difference plot-wise between those and this, however, is that the story continues onward from that point. Here, Jaffe’s career is a wreck, and he conceives a plan to pull Lily back to the stage, executed through lengthy hilarious scenes aboard the titular train, running from Chicago to New York City.

And while Barrymore is typically marvelous – playing the type of part he would lean more and more into as his career devolved from master Shakespearean to alcoholic punchline – the movie only works because Lombard gives as good as she gets. She would never play another role like this – this towering, bitter, egomaniac diva – and she digs in with gusto. Her character weirdly isn’t unlikable, at least not any more than Barrymore’s Jaffe, but that’s the joy of farce – no matter how terrible the actions and attitudes, you can still enjoy the deflated egos and rampant megalomania. You don’t need me to explain farce to you! 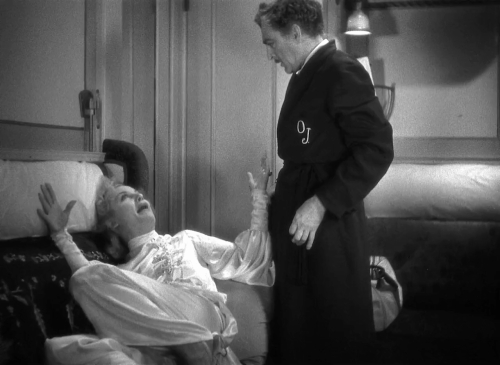 These sort of reactions abound

But as this is the last of the Lombard films, let’s make one more quick trip through them – while she was a terrifically solid light comedianne, her real standout work is here and in #211 My Man Godfrey, mainly because you never saw her play these sorts of roles again. And it’s hard to say that it was because she died so young, as she still managed to make upwards of 40 films in a little over a decade. No, I think it was more that these two movies put her next to great directors – Howard Hawks and Gregory La Cava – and the movies had aspirations above screwball fare. Now, her straight screwballs are terrific – list films #190 Nothing Sacred, #382 True Confession, and others like Hands Across the Table, Fools For Scandal, The Princess Comes Across – but when paired with the true visionary filmmakers of the time, obviously, the product ends up better. #142 To Be or Not to Be is almost certainly the best movie she was in – and it makes sense, it had the best, stakes-heavy plot, and Ernst Lubitsch at the helm. The only reason I wouldn’t say it’s one of her best performances is that she has so little to do in it, relatively speaking. That’s a Jack Benny movie, enhanced by her presence no doubt, but with little heavy lifting required. Her Hitchcock movie – Mr. and Mrs. Smith – is the rare comedy misstep around the end period of her life, mainly because Hitch wasn’t a comedy director. Nonetheless, the movie isn’t bad, even if the tone has a hard time staying light. Oh, also, let me just throw in that while I know it was a different time, her supposed “comedy” Love Before Breakfast is some odious garbage, the poster for which is this: 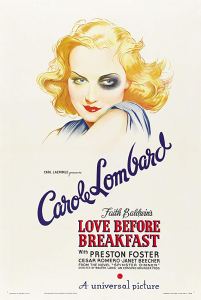 Because, that’s right, the dude she ends up with in the film belts her, through a sequence of comic bullshit

Twentieth Century wasn’t a huge hit in its day, but did manage some lasting impact, besides Lombard’s subsequent stardom. Already a Broadway play, it was later transformed into a fairly successful late ’70s musical On the Twentieth Century starring John Cullum, Madeline Kahn, and Kevin Kline, who won a Tony. It was revived in 2015 with Peter Gallagher and Kristen Chenowith, and from the videos floating around it looks pretty fun.

Most of the new Two-Timers appeared in other Lombard films – Barrymore and Kennedy in True Confession, Connolly and Lane in Nothing Sacred, while Ralph Forbes joins the club from his role in #333 The Hound of the Baskervilles. But the only person advancing beyond that is Carole, the sixth actress to join the Five-Timers.

I’m sure I mentioned somewhere previous, but she was also married to Clark Gable, and they apparently had cats. Movie stars! Just like us!

Coming Monday! You met me at a very strange time in my life –