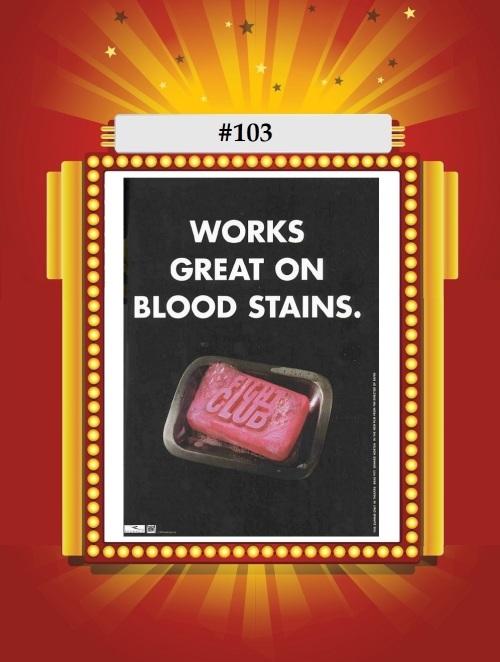 My second favorite movie from one of my favorite years – 1999! – and my second favorite David Fincher film, Fight Club wasn’t anything when it first came out. Sure, ’99 was a pretty robust year, but considering what this would become, it’s amazing how virtually overlooked it was that fall. It’s hard to even say this is a cult classic – this is a mainstream classic that just got ground up in the marketing and lost in theaters. Hell, when I first saw it I didn’t know what to make of it. The reviews were good, but the trailers didn’t make a ton of sense. Also, because they had a ton of shirtless Brad Pitt moments, I felt like the initial aim was to get women in the theaters, even though it is decidedly a guy movie, and so the commercials didn’t much convey what the hell was going on in this film either. It grossed all of $37 million – sandwiched between My Favorite Martian and 10 Things I Hate About You in the ’99 ranking, at 54th – got one Oscar nomination for Sound Effects Editing and four nominations from The Stinkers, including Worst Supporting Actress for Carter and Worst Hairstyles Male and Female, because that’s what the Stinkers was.

The IMDB currently rates Fight Club as the tenth best movie of all-time, just ahead of The Fellowship of the Ring, Empire Strikes Back, One Flew Over the Cuckoo’s Nest, and Goodfellas.

And maybe you need a few trips through this film to really hook into it. I don’t think it’s overly confusing, but a lot of the neat little Easter eggs aren’t evident on first viewing. Also, a lot of Tyler’s speechifying feels like just that when you think he’s only trying to convince dudes to wail on each other in a dank basement – it resonates different once you know where the film is actually headed. As flashy/cool as the film is, especially across the first half of the movie, it also takes time to delve into the modern workplace culture, creating a very different viewing experience when you’re older than when you’re in college – I get a bunch of different stuff out of this movie now than I did in ’99.

It’s also a pretty funny domestic terrorism film, and an ultra-violent men’s empowerment satire, and the only significant look at homemade soap making ever captured in a major motion picture. A significant improvement on Chuck Palahniuk’s source novel – a fairly solid but more superficial rendering of the same basic story, this is the earliest Fincher film to make the list – even though I do like Se7en and Alien3 (somewhat) – and helped propel him toward more mainstream/awards popularity, just from the sheer force of filmmaking skill on display. In the past – on this blog – I would make long term Oscar predictions – like, so-and-so will win an Oscar in the next eight years type things, I think only for acting. However, if I had to do so for directing, I’d have Fincher very near the top to win Best Director, over the next, let’s say, ten years. As of this writing, he hasn’t directed a movie since Gone Girl in 2014, though, so that doesn’t give me a lot of chances to be proved right.

“There’s a sign on the front that says ‘Lou’s Tavern.’ I’m fucking Lou.”

Fincher makes his third list appearance, after #278 Zodiac and #221 The Girl With the Dragon Tattoo, while Edward Norton (#124 Moonrise Kingdom and #255 Red Dragon) and his film boss Zach Grenier (Zodiac, #326 Delirious) join the acting Three-Timers. Spotlight!

Sometimes I can find the exact gif I want, and sometimes I’ve gotta make it myself. Dropping the phone makes this moment

Coming tomorrow! Certainty of death. Small chance of success. What are we waiting for?