Today! Because I couldn’t just stand there and watch him shoot those people right in front of me. It was…rage – 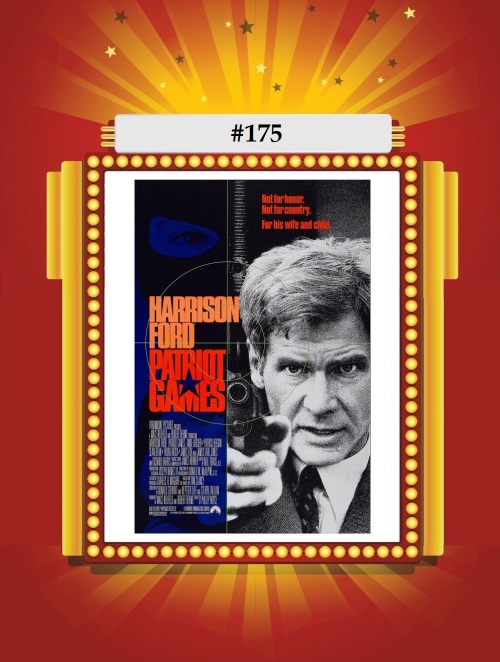 There have been a bunch of Tom Clancy/Jack Ryan adaptations, but only one was released at the center of my film universe – 1992! And so, Patriot Games, the best and my favorite of the Jack Ryan movies I’ve seen (sorry, Sum of All Fears!)! It’s not as baggy as Clear and Present Danger and is more exciting than Sean Connery’s Russian sub commander in The Hunt For Red October. We only went and saw the Chris Pine Shadow Recruit (I think it was called?) thing because we were literally travelling to Moscow the following month, and thought it might be a good travelogue primer. It was not!

It’s a plenty scary work trip for everyone who goes!

Patriot Games sees Harrison Ford’s former CIA man Ryan thwarting an IRA assassination plot, only to draw their attention on himself and his family. It’s vintage Ford – running, punching, growling – but also mixed with a pretty intriguing international terrorist plot, and that greatest of doomed film villains, Sean Bean as Sean Miller, out for vengeance. They also managed to build a continuity bridge back to the Alec Baldwin Ryan by returning James Earl Jones as Admiral Greer. Thank god! This was only two years later, and in the early ’90s it might’ve seemed awful strange otherwise. Nowadays, reboot away, consequences be damned!

And maybe this seems like an odd film for 12-year-old Joe to be watching, but Harrison Ford being such a staple of everyone’s childhood – between Indiana Jones and Han Solo – that if his movies were on TV, I’d check ’em out. I’ve seen Regarding Henry so many times, you guys. Also – I think directly because of Last Crusade – my sister and I insisted my dad take us to see Hunt for Red October in theaters, when I would’ve been ten. So clearly we were on board watching Jack Ryan adventures starring Indiana Jones actors!

Beyond all the Spielberg cast-offs, you’ve also got a pile of Star Wars folks (Vader himself James Earl, Han Solo, Mace Windu), plus Albus Dumbledore (Harris), Ned Stark (Bean), and Rome’s Atia of the Julii (Polly Walker). All-stars! The late, great J.E. Freeman turns up too, mere years after his landmark work as Eddie Dane in Miller’s Crossing. Perhaps Patriot Games is seen as too much of an action movie, after the thinking man’s accent catastrophe that is Hunt for Red October, but it’s odd the subsequent reputations of these movies. I’ve always considered this hands down the better film, and it’s way more fun, but I don’t think I’m in the majority here. Who’ve you got in this argument? Or is the John Krasinski Amazon show so great that your conversation begins and ends there? I’ve never seen it – and I probably won’t get around to it, I’ll be honest. There’s too much TV out there anymore.

In what I now recognize as a mistake, Gunton’s work in Demolition Man did not find a spot on this list. Boo!

Coming tomorrow! Good nutrition’s given you some length of bone, but you’re not more than one generation from poor white trash, aren’t you?