Today! Because there’s no such thing as ghosts and monsters. Haven’t I made that clear to you?

Happy New Year, folks! The best of the Universal Sherlock Holmes films, The Scarlet Claw was the eighth Rathbone/Bruce pairing, and the rare adventure set in Canada (!), concerning a series of murders in the town of La Mort Rouge (talk about being right on the nose). In a lot of ways, the plot parallels The Hound of the Baskervilles, even if the story is technically one of the originals produced for the movies. The Doyle estate’s deal with Universal was for two adaptations per every three films, which was honored only basically.

This was also the first original they made which wasn’t updated to the present day – as discussed some in #291 The Voice of Terror (which itself technically is based on the story “His Last Bow”) – and they make good use of the freedom, concocting a more wide-ranging mystery than normal. It’s still a pretty tight film, and it’s not overflowing with suspects, but it doesn’t have the locked-in quality of a number of the movies around it – Sherlock Holmes Faces Death entirely set in a mansion, The House of Fear also set in a mansion, Pursuit to Algiers on a boat, etc. It also features the best non-Moriarty villain in the series, even if it is a surprise adversary, in the form of the constantly-disguised Alistair Ramson, first masquerading as a legendary monster haunting the village, and then as a number of townsfolk.

This movie has a ton of gorgeous posters, too

First Fox and then Universal quickly burned Basil Rathbone out on playing Holmes, even if it would be the role to which he’s forever linked. The crazy Universal deal was for 21 movies, only 12 of which were made in the five years before Rathbone bailed – all this in addition to the two Fox pictures in 1939 and 200+ radio shows he and Bruce made for the Mutual Broadcasting System in the same time period, most often sponsored by the long gone Petri Wine company of San Francisco, California! ♫Oh, the Petri family took the time to bring you such good wine! So when you eat and when you cook, remember Petri Wine!♫ To make good food taste better, remember – Pet-pet-pet-ri Wiiiiiiiiiiiine. (I’m looking for free product, whoever now owns the Petri vineyards!) 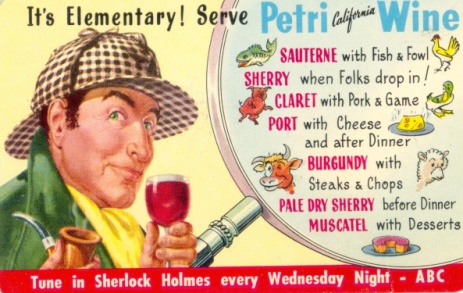 You folks can’t even get it anymore, so envy those of us who remember 1944 like it was yesterday!

But yes, this is the third of the Rathbone/Bruce Holmes films to make the list, and my second favorite overall. For all of the Sherlocks that have already come through – the Downey version at #383, the #220 Caine comedy, the #193 Scott fever dream – I don’t believe there are a ton populating the high end of this list. My dad was a huge Rathbone/Bruce fan, so I’ve seen these more than any others, enabling them to win out in the rankings. Sure, not all of them – Sherlock Holmes in Washington, again, is dreadful – but most are solid, short films. Scarlet Claw is on the long side of the Universal group, and it wraps up in a tight 74 minutes. So if you’re looking for well-acted, cheaply produced WWII-era costume mysteries, you could do worse!

It’s #333 The Hound of the Baskervilles, #291 The Voice of Terror, and now The Scarlet Claw for Basil Rathbone and Nigel Bruce to join the Three-Timers. Funny enough, this film’s director, Roy William Neill, was behind the camera for fully eleven of the fourteen Holmes films, but this is his only movie on the list, as the three he didn’t direct are the other three on the list. Huh! Maybe more of these movies would’ve made the cut if they changed up the man in charge a few times!

Coming tomorrow! Bloody proud of yourself, aren’t you? You stuck your nose in where it didn’t belong –