Today! Because his pulse never got above 85, even when he ate her tongue – 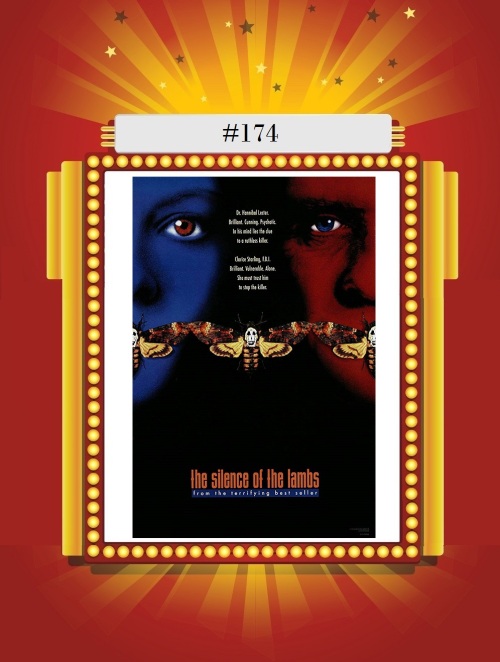 Come on, you had to figure if I’ve got #255 Red Dragon on the list that Silence of the Lambs was on the way, right? And I think both of these movies work for largely the same reason – not too much Hannibal Lecter. See, when they move Hannibal to the center of the story – à la Hannibal – he’s sort of too much. It’s like the key to every great Muppet film – you reserve Miss Piggy for the second act. Hannibal Lecter is the Miss Piggy of the psychological horror genre. 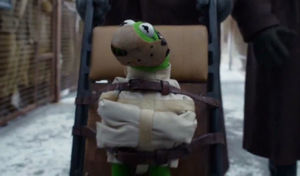 Ah, what could have been

Buffalo Bill is a pretty interesting villain in his own right – not unlike the Tooth Fairy in Red Dragon – and the manhunt for him is equally compelling. The difference, quite obviously, is the Clarice/Hannibal interplay leading up to the finale. Where Will Graham and Hannibal had all this backstory between them – coloring everything that happens in Red Dragon – Clarice is coming at this whole thing a bit under-prepared, and so needs to navigate their relationship on the fly through this dicey kidnapping/murder investigation. Also, in Red Dragon, you know going in there’s no chance Hannibal is going to end up busting out at some point. While here…

Like most people, I really enjoyed Silence of the Lambs when it was first out, but wasn’t, like, that into the whole Lecterverse, or whatever you’d call it. It was only when NBC did their solid, weird Hannibal TV show a few years back that I read the Thomas Harris books and really dug into the whole story. And you know what? It’s fine. It’s not amazing. Silence of the Lambs is better as a movie, but it’s a fine book. Red Dragon is probably a little better on the page. Hannibal has problems in both areas, especially the book’s ending, which is insane. 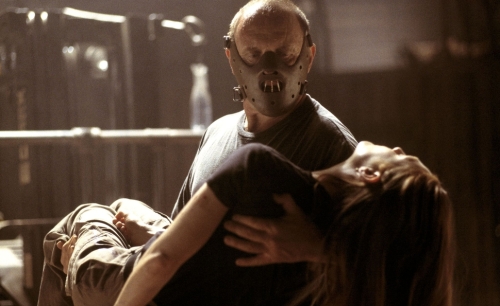 Not to say the movie ending wasn’t also kinda batty

But really, what significant faults can you find with the Silence of the Lambs film? Maybe Anthony Hopkins’ Lecter is a bit too omniscient? Maybe Buffalo Bill weirdly gets shuffled off to the side of things too often, considering he’s the big bad in the piece? Maybe Miggs just doesn’t stick around long enough for you? It’s pretty damn near perfect, this movie. Horrifying, sure – and how the hell did Lecter string that guard up like that?? – but thrilling, especially the super tense night vision final showdown.

As mentioned in the #182 One Flew Over the Cuckoo’s Nest post, this was only the third movie to win the big five Oscars – Best Picture, Director, Actor, Actress, and Screenplay – even though a pretty good case could be made that Hopkins should’ve been submitted as Supporting, considering he’s only in the movie for like twenty minutes. And not unlike Cuckoo’s Nest in ’75, it was a pretty deep year awards-wise in ’91, and Silence wasn’t amassing momentum going into the Academy Awards. Foster had won at the Globes, but Oliver Stone won Director for #357 JFK, and Bugsy won Best Drama. Hell, Nick Nolte beat Hopkins for Actor for The Prince of Tides! The BAFTAs gave Best Picture to The Commitments! Sure, Silence took home everything in New York, Chicago, and at the National Board of Review, but I think retroactively people remember this movie being a complete juggernaut at the awards, where I distinctly remember Bugsy being the big favorite going into Oscar night. Ah, Bugsy! We never knew ye!

We’ve got a load of new Two-Timers, including director Demme, following his work on #275 Melvin and Howard, but the only advancing guild member today is Sir Anthony Hopkins, becoming the fifth Six-Timer, following his work in #350 Bram Stoker’s Dracula, #214 Nixon, Red Dragon, #323 The Elephant Man, and #242 Chaplin! 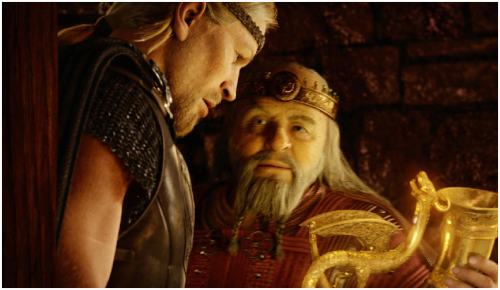 Say what you will about Zemeckis’ motion capture period, but at least Hopkins’ King Hrothgar kept his clothes on, for the most part, unlike some Beowulf co-stars

Coming Monday! Either this man is dead or my watch has stopped –