Today! Because I’ve only one reason to be angry – you broke my record –

Like the pervasive Sherlock Holmes-ness of this list, you’re going to find more versions of Ebenezer Scrooge’s Psychotic Yuletide in the days to come than you probably would’ve expected. As avid viewers of my Instagram story could tell you, come December I really bang through a lot of Christmas movies, with the Dickens classic featuring heavily in the rotation. This list would’ve had more Scrooge on it, honestly, had so many of the best productions not been television adaptations. So just quickly – Mr. Magoo’s Christmas Carol is the best musical version of this story ever made, hands down. Mickey’s Christmas Carol likely would’ve been right in its league, had not all the songs been excised, leaving the 24-ish minute edit that remains. The Patrick Stewart version from the late-’90s has some terrific variations on the old standard, and the George C. Scott version is one of the best straight renditions out there.

My guess is few hardcore Marley-o-philes would place the 1938 version near the top of their lists. It changes so many little things, and a few major ones, that some may shout blasphemy. I don’t have this issue – even if some of the differences are a bit frustrating, narratively speaking. If you don’t immediately recognize this as the Reginald Owen version, it’ll probably ring a bell that this is the Christmas Carol with all the sliding. Right? No?

The ’38 has a much lighter tone than most of the major live-action versions of the story pre-1970. The 1935 Seymour Hicks version is a grim, cheap nightmare retelling, with a solid performance by Hicks, but an invisible Marley, and poor existing film stock. The ’51 Alastair Sim version is a complete film like virtually no other retelling, but it is also very somber in stretches. ’38 features Fred Scrooge as a far larger character than any other movie, and he fills that time sliding on ice on public streets and sidewalks like a madman, laughing his head off and proving himself the jolliest son of a bitch jolly old England ever knew. 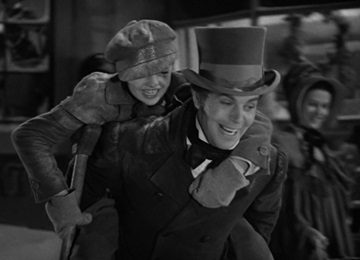 Here’s Fred sliding with Tiny Tim on his back! Did Dickens cut this scene from the original text?

Cratchit, meanwhile, manages to get himself fired – a super rare occurrence in Scrooge films – by throwing snowballs with kids after work, and beaning Ebenezer in the top hat, causing it to get crushed under a carriage. What?! How the hell is the ending supposed to work if Cratchit is sacked, you may ask?

Well, like a few random versions (Mickey’s included), Scrooge pops over to Cratchit’s house on Christmas Day, bearing gifts, and promising a partnership. Except wait, nope, he offers Cratchit’s son a job, gives Bob a raise, and makes Fred – Fred Jolly Crazy Laughing Scrooge – his partner. What does Fred know about this business? How can that possibly make Bob feel? Insane! 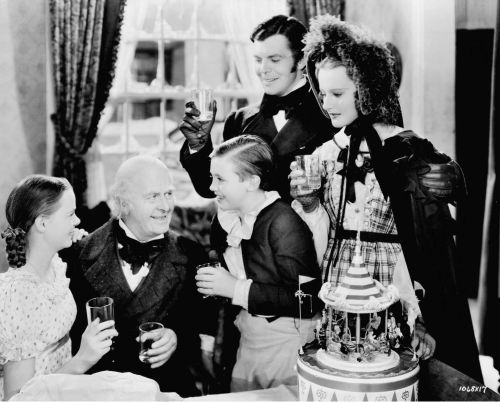 I’m sorry for all the spoilers, but this really is a wacky Christmas Carol unlike any other. And I think that’s why I like it – it makes so many leaps, does so much unexpected stuff, that it comes off as a fresh rendition. This was also my dad’s favorite version, and by a lot, so I’ve probably seen ’38 more than any other holiday film this side of the racist bullshit that is Rudolph, the Red Nosed Reindeer. But strap in, because there is plenty more Tiny Tim hobbling in the days to come. Come back December 18th to see which version lands next!

Not to drag this out much longer, but the ’38 version also has an interesting origin story. Lionel Barrymore (It’s a Wonderful Life villain Mr. Potter) was slated to play Scrooge in this film, following his many years performing the role in hugely popular radio specials, but had to drop out due to illness, and recommended Owen as his replacement. Owen, only 50 or so at the time, was aged up considerably for the part, which is why he appears virtually unchanged in his other most famous role, as Admiral Boom in Mary Poppins, some twenty-six years later. Huh!

We’ve got one new Two-Timer as Jacob Marley now haunts the club, as Leo G. Carroll follows up his role in #316 North By Northwest today. Spotlight!

Coming tomorrow! Most people would leave, not us. We’re Vikings, we have stubbornness issues –