My third favorite Scorsese/DiCaprio outing felt like a glorious return to vulgar form for Marty, following the excellent kid-centric Hugo in 2011. He never stopped making good-to-great movies, but Wolf so revels in the obscene decadence of unabashed douchebag Jordan Belfort’s life that it is more reminiscent of Goodfellas than anything Scorsese has made since. It is also by far his funniest movie, whether that was the original intention when rights were purchased or not. The excellent, epic screenplay by Sopranos/Boardwalk Empire helmer Terence Winter turns what could’ve been a harrowing, drug-fueled Wall Street knock-off into a hilarious Scarface/Bachelor Party hybrid. DiCaprio was never better, and was roundly robbed of the Oscar by co-star McConaughey for Dallas Buyers Club, thus enabling him to later win for the lesser work in The Revenant (I know this the second post already where I take swipes at Revenant, which isn’t a movie I realized I didn’t care for until this month). Also, if Jonah Hill and Margot Robbie don’t win Oscars in the next decade, I’ll be surprised – put me on record saying it! 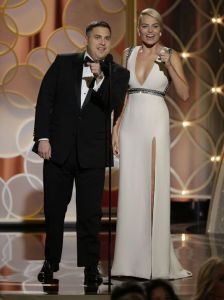 They won’t just be presenting awards in the future!

But, I mean, it is probably a bit too long – does this story really need three full hours to tell? Sure, it rips right along, but it wanders off on digressions here and there, and it gets caught up in the same beats quite a lot through the middle.

In addition to its five Oscar nominations (Picture, Director, Screenplay, DiCaprio, Hill), I think we would be remiss to not bestow a Best Supporting Teeth award to Donnie Azoff’s monumental chompers above, and Best Quaalude Enhanced Lamborghini Escapade, a sequence that could’ve been a movie in itself.

Coming tomorrow! A town that is truly a la mode –