I Dated a Fugitive From a Chain Gang

It was in the brisk November of 2011 when I lost her again to Johnny Law.  This was six months after her daring side-of-the-highway, tilling-the-fields-with-a-pickaxe escape in rural Kansas (is there any other type of Kansas?), and almost a full year since she first became known as inmate #78725439429 in the correctional system.

We had a darling little relationship before then, inmate #78725439429 and me.  We lived high on the hog in the Hog Butcher to the World, as Carl Sandberg so romantically put it.  It was a different time back then – we were still innocent youths, unfamiliar with prison visiting hours and making weapons out of contraband Oral B toothbrushes.  As Archie Bunker sang, those were the days.

Until that fateful evening when the long arm of the law reached across the Mississippi, up through the backwaters of Missouri, stopped off for a quick visit in the Illinois state capital to see Lincoln’s boots, and then continued on north, unfazed by boredom, corn fields, or fireworks advertizing.  It plunged its meaty claw into the seedy underbelly of the great city, finally scratching its way to our doorstep – more a barnacle on the underbelly than any sort of pustule or abscess.  She was summarily plucked away – guilty as the pecan be crunchy, mind you – and spirited back to America’s heartland.  I was left bereft of my convict main squeeze. 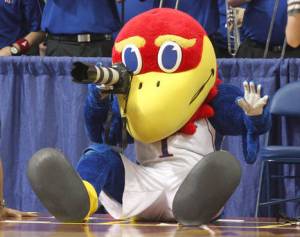 What was her heinous crime, you may ask?  What offense elicited such a paramilitary response?  How did she so offend the Sunflower State that they sent pairs of bruising meat hooks to haul her sorry can away?  Well, through sheer oversight, preoccupation, and a dash of laziness, inmate #7872549429 had failed to pay up on a completely earned and deserved speeding ticket.  You’d think, well hell, that’s no reason to chase the lassie down, kick in the door, and drag her back across a number of states in a laundry bag, wouldn’t you?  Well, apparently things aren’t as rational and clear-headed in Kansas when your fines get ignored and then double then triple.  They get mad – cornhuskin’ mad.

So she was off to the pokey, and my life went into a tragic downward spiral, fueled by depression, unbearably long car trips to Leavenworth, AM radio, Jack in the Box drive thrus, and ultimately, enough Jack and Cokes to permanently change my nickname at work to “Stinky McBourbon (we really should fire that guy).”

Months dragged by, and I really didn’t see the relationship growing like I would have hoped.  Sure, we still talked, and I saw her every other week (if I could scrape together the gas money after I got let go from the company), but there was a certain personal connection missing.  She’d kept getting time added on to her initial 10 day sentence for getting into knife fights and plotting cockamamie escape plans, to the point that she was now looking at 8 solid months in the clink.

But then opportunity struck.  They were taking some of the more physically fit jailbirds out for a little bare-handed plowman work, and my sweet #7872549429 hatched a masterful little scheme.  While they were out breaking rocks in the hot sun in old farmer Willoby’s corner acre, her and some cronies would smash up the shackles, bonk the guards like Curly Joe, and hightail it to the Mississippi.  I knew nothing of these goings on, mind you.  I was busy making right with the Almighty at the 86th Street church of the Sepulchral God on the south side.  I didn’t know my lady friend was on the lam until she turned up, grimy and disguised as a free person on my doorstep.

From there forward we’re on the road, Badlands style, staying one step ahead of mean county sheriffs and their pack of dimwit deputies, shooting first and not asking questions at all.  It was here the relationship managed to more resemble what I’d originally conceived way back when we were still going to the local AMC and watching Shrek sequels on weekends.  I mean, not exactly – there were way, way more tourniquets to make than I’d imagined – but at least we were together, to battle the gangrene together.

Alas, it couldn’t go on indefinitely.  My darling inmate #7872549429 knew that eventually she’d be caught, and that I’d likely be taken in too, as her accomplice, lackey, and all around dogsbody.  We had this heartbreaking conversation as she left me at that Knight’s Inn just before dawn, day before yesterday:

Me:  But where will you go?

Her:  That isn’t important now, but you have to get away and be safe!  Live your life!  Get that buckshot removed from your ass and move on!

Me:  I have nothing to go back to without you!  It isn’t fair!  When will our country learn that convicts are people too, that they shouldn’t be treated like animals, that we’re all guaranteed a fair shake in this rotten, crummy system?

She backed out of the door and started crossing the parking lot, toward the highway and the AM/PM where we’d parked the car as pointless subterfuge, her blonde hair and vicious forehead scar glowing vibrantly under the lampposts every twelve feet she went.

Me:  But how will you live?  What’s your goal?  Don’t leave me here alone!

Tagged as Badlands, Dating, Fugitives, I Am a Fugitive From a Chain Gang, Jayhawks, Kansas, Outlaws, Romance, Women in Cell Block 7