Excerpts from My New Masterwork – The Bible, Part II!

Excerpts from the various books of the forthcoming bestseller The Bible, Part II, perhaps with the subtitle Revenge of the Christ:

And the again risen Jesus decided the most pressing concern of His now that He’d crawled from the grave was the need to take a shower.  An unholy funk clung to the Christ enough so as to water the eyes of passers by, whom Jesus misinterpreted as being ardent, overcome followers.  He passed by them, laying on hands for a quick blessing, and made His way to the nearest public spicket, whilst those touched by the Lord vomited in his wake.

And the wayfaring Jesus thus reached the Isthmus of Tehuantepec, where He was greeted by the four headed monster Beelazarus of the seabound zombie nation of San Salvador.  Jesus recognized the vile beast as having once been the man He’d resurrected from the dead many years earlier, and now found it ironic that He would have to send the creature back to the afterlife.  And, as is His wont, Jesus wept.

Beelazarus rose out of the water and crashed on the beach like a wave made of rotting carrion and consignment store dungarees.  The Messiah’s band of do-gooders were at least a day behind Him, having stopped off to buy lottery tickets and sack the vile city of Querétaro.  So Jesus was forced to face the putrid, undead barnacle magnet alone.

“So Peter, did you ever hear the one about me and Damacles riding around in the Tauras?”

“The Lord and the sword in the Ford?”

“You ruined it!” Jesus shouted, and then wept.

“Boy, it is colder than a well-digger’s ass outside,” Bob said.

The double doors flew off their rickety hinges, tables were flipped over, and guns started blazing away in all directions.  Women and children exploded all around him like balloons, and the cowboy Jesus could barely see His targets for all the tears in His eyes.  The bandit Judas was hold up in the brothel’s upper chambers, no down feasting on the carnality, and his squadron of goons was stationed well on the ground floor to guard against the Christ they knew would come for their leader.  Jesus expected no less.  He hadn’t just chased the resurrected betrayer thousands of miles across oceans and eras with the idea that capturing him would be easy.

“Give it up, my Lord and savior!” one of the goons shouted.  “I’ll fill you with so many holes you can have all your Apostles stick fingers in when I’m done!”

His ten gallon hat flew off as the whiplash Jesus spun behind the bar and blasted the blasphemer straight to Hell.

“The sun has to set before it can rise,” Jesus told the group, patting Humpy gently on the neck.  The party was half tuning the Prince of Peace out by this point, many tired from hours spent betwixt humps in the baking heat.  But He kept right on urging them forward, in the manner He knew best.

“Only from the sweat of your brow can you hope to taste the salt of a satisfaction of a day spent in toil and strife, eyes misty from the perspiration preventing the perspicacity you so desperately desire necessary in your quest to discover what it is that you seek at the bottom of your deep sunk well of wants.”

“Oh fer crying out loud,” someone in the back muttered, and for a while at least, the group was silent.

“I am the Son of God, Veronica,” Jesus told her.

“I’m not afraid of meeting your parents,” she responded.

“I cannot have returned from the great beyond for pleasures of the flesh!”

“But we made such beautiful music together!” she pleaded. 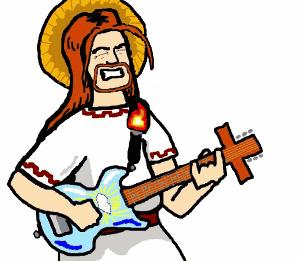 “Just because you have perfect pitch and I can jam on the sitar like no other doesn’t mean we are destined to be together, not in that way.  If you love me, you should take me into your heart.”

“Get behind me, wicked trollop!” Jesus shouted, fighting back tears.

4 responses to “Excerpts from My New Masterwork – The Bible, Part II!”