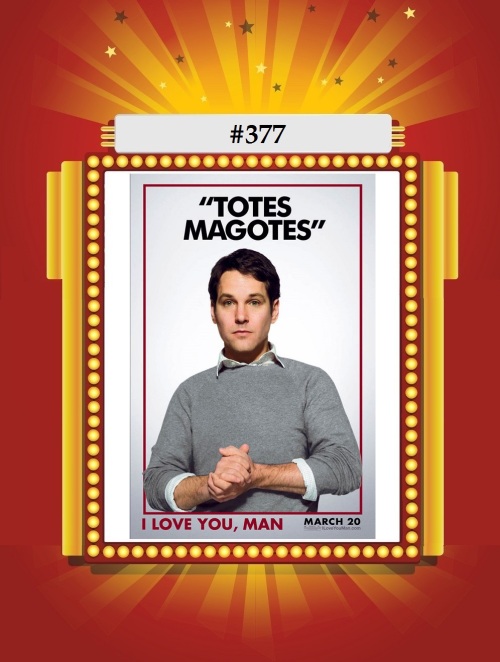 There was a stretch in the late ’00s that I in my infinite Epinions hubris referred to as The Golden Age of Comedy (Epinions.com, gone but not forgotten!). And while in retrospect this may be overselling the half dozen bro-centric chucklefests that were released between ’07 and ’10, some are proving to give the test of time a go. Thus, the eminently quotable I Love You, Man, featuring just a ton of TV comedians supporting the ageless Paul Rudd in his search to find a male friend as an adult. The random smattering of glorified cameos include cast members of SNL (Curtin, Samberg), The State (Lo Truglio, Lennon, Wain), Human Giant (Huebel, Ansari), Broken Lizard (Chandrasekhar), and UCB (Walsh, Kroll), and I’m certainly overlooking some folks who belong in those groups. Rudd and Segel make a terrific combo, finally sharing a lot of screen time in the third of five films they appeared in from ’07 to ’13 (and the only one on this list). Also, Lou Ferrigno! And Rush! The holy trinity! END_OF_DOCUMENT_TOKEN_TO_BE_REPLACED

The Set of 400: #387 – My Favorite Animated Representation of My Life Goals

Today! Because we’ve got a diem to carpe –

Cloudy with a Chance of Meatballs (2009)

They had a few writing and producing credits, mostly on TV, before this, but Cloudy 1 would kick off the big screen careers of the great Lord and Miller, responsible for a number of solid comedies in the years since as directors/producers, including 21 and 22 Jump Street, The Lego Movie, The Lego Batman Movie, and Cloudy 2 as well as the entire run of FOX’s great The Last Man on Earth. They were also at the helm of the funniest Star Wars movie we’ll never see – Solo: A Star Wars Story – The First Two Weeks of Production, before Disney fired them, and the movie went on to be a colossal failure (I still liked Solo, but man, what might’ve been!). END_OF_DOCUMENT_TOKEN_TO_BE_REPLACED

A perfect storm of a media blitz, incessant buzz, A-list filmmakers and cast, and being centered around one of the most beloved institutions of popular culture the world has ever known has created what will likely go down as the seminal entertainment event in the lives of everyone currently sucking oxygen on July the 18th.  In a summer that has already born witness to smash critical and commercials hits the like of Iron Man, Kung Fu Panda, Indiana Jones and the Kingdom of the Crystal Skull, and Sex and the City, the granddaddy of them all is about to be unleashed on a ravenous public, and cinema, humanity, the concept of enjoyment, and the sublimity of being are about to be changed forever.

Space Chimps blasts off in theaters on July 18th. END_OF_DOCUMENT_TOKEN_TO_BE_REPLACED