Today! Because he was a better dresser than Churchill! He had more hair! He told funnier jokes! And he could dance the pants off of Churchill! 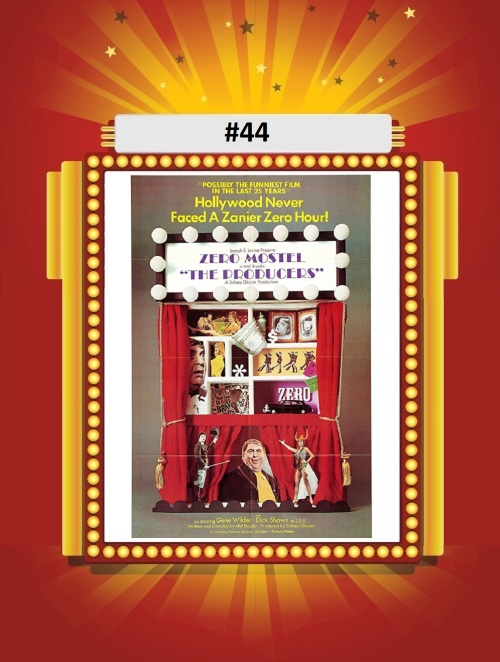 You know I love me some movies about plays, and really stagey ones at that, and so – The Producers! While it would take decades for Mel Brooks’ classic to actually make it to Broadway, it should come as no surprise that it made the leap pretty seamlessly. The entire first half hour of the movie is just Zero and Gene’s one room shtick to set up the plot – and wildly funny shtick it is. And with the exception of a handful of NYC street scenes, it’s just one room after another hosting wacky characters and even wackier theatrics. A few of his other films would grab Oscar nominations, but The Producers is the reason Mel is rocking that EGOT – winning Best Screenplay in 1968, as well as Best Musical, Best Book of a Musical, and Best Original Score for the stage version in 2001 (He also won Grammys for Producers related work, but already had one on the shelf for The 2000 Year Old Man in the Year 2000 as Best Comedy Album). 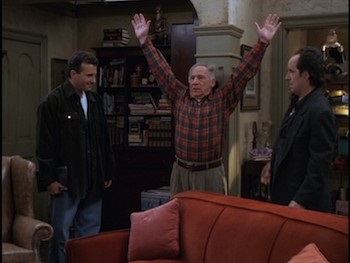 Just to wrap this up, he also won three Emmys for Guest Comedy Actor on Mad About You, and one for writing on a Sid Caesar special in the ’60s

So how is The Producers movie holding up? I know some people who would strongly advocate that it is faring poorly as the years go on. I don’t totally get this, but okay, in comparison to Mel’s later, grander parodies, I can see where this one feels a little more pedestrian. And if it’s just that you don’t like Mel’s Borscht Belt jokery, well, this is chocked full of that. But I still contend this is the best of his films character-wise, and the acting is superb. Zero and Gene make such a wonderful comedy team that their only other teaming (to my knowledge) also forced its way onto this countdown, back at #280 with Rhinoceros. That, being a cerebral Eugene Ionesco satire-fantasy, has characters a bit less realistic but that fit the scenario, while Producers has wildly unrealistic figures going to zany lengths to defraud their Broadway investors. As I’ve mentioned before, I’m a huge fan of the very limited amount of Zero Mostel film work that exists, and as a kid Gene Wilder was just about the biggest movie star I could imagine, so Producers to me is more or less perfect.

And this is to say nothing of the terrific supporting work, especially Kenneth Mars’ loopy Nazi playwright Franz Liebkind and Dick Shawn’s hippie Hitler portraying actor L.S.D. The only songs in the original film were “Prisoners of Love” and “Springtime for Hitler” – which was also the name of the play within the film, and the film itself for a little while – but neither managed award nominations at the time, probably for the same reason the title of the film got changed. Gene Wilder did pick up his lone acting Oscar nod for playing accounting nebbish Leo Bloom, while Zero was up for Best Actor Comedy/Musical at the Globes.

I didn’t see this film until well after Blazing Saddles and Young Frankenstein and History of the World and probably Spaceballs, too. It’s a little too visually uninteresting for kids, I’m guessing, and does have those long, stagey scenes. And while it still pulls up just short of being my favorite Mel Brooks film, I think it’s in a very close contest for being the best. While most of Mel’s movies have a towering egomaniac at their center – Frederick in Young Frankenstein, Hedley Lamarr in Blazing Saddles, Dark Helmet in Spaceballs, etc. – none quite capture the role’s grandeur and nuisance like Zero’s Max Bialystock, and that’s what sets it apart for me. Plus, I often gravitate toward finales where just everything explodes or shootouts erupt or chaos ensues. This is a problem with all the fiction I write, too – I opt to destroy the whole world pretty much every time. 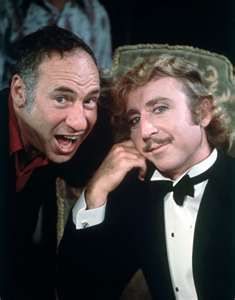 Considering how frequently they collaborated, I don’t believe they ever appear on screen together.

Coming Monday! When I invite a woman to dinner I expect her to look at my face. That’s the price she has to pay –