Today! Because I always knew my inside leg would lead to power – 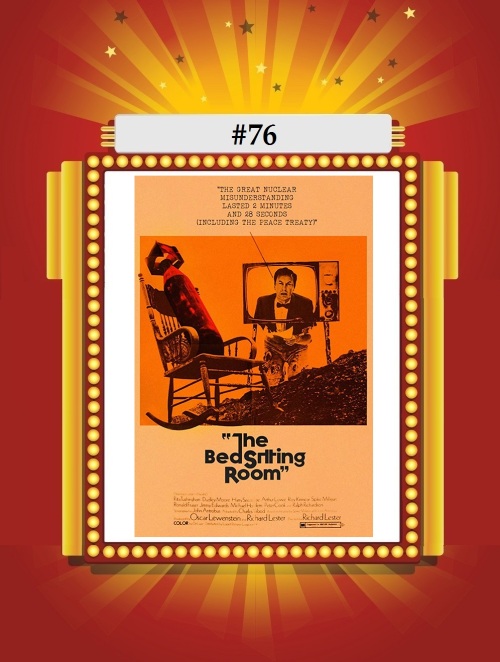 This post-apocalyptic satire was strangely difficult to find for quite a while. I’m not sure if this was exclusively a stateside problem, as it is such aggressively British humor from its time, but I couldn’t locate a copy forever, and then all of a sudden The Bed Sitting Room was streaming on Netflix. I can only assume its viewership crushed everything else on the service, as when it disappeared from there it promptly turned up on DVD. I could have this all wrong – it’s not like I was searching for The Bed Sitting Room every day – but it sure seemed like this was the journey the movie took to reach my face.

And it appears to have made it to Blu Ray since then! Never mind!

While it was streaming, though, I would watch this movie, I’m going to guess, every month. It quickly got to the point where if I couldn’t decide on anything else, I’d throw Bed Sitting Room on, to the consternation of the wife, and the detriment of anything else I might’ve been trying to do. For whatever reason, I find this movie endlessly watchable, and again, I don’t tend to rewatch things – even things I love – all that often. There are just so many characters, and so many wonderfully peculiar details littering this story that I always turn up new things to enjoy.

Based on Spike Milligan and John Antrobus’s play of the same name, post-World War III England is a wasteland following the “nuclear misunderstanding” that lasted less than three minutes, causing mutations and insanity among the survivors, one of whom – Ralph Richardson’s Lord Fortnum – has the distinct feeling that he is transforming into a bed sitting room, and begins dropping bricks. Frank Thornton’s The BBC travels from citizen to citizen, positioned behind a hollowed out television to deliver the news, while policemen Dudley Moore and Peter Cook travel by a car dangling from a hot air balloon, instructing the survivors to keep moving, to keep the enemy confused. Oh, one of the policemen may be turning into a dog.

If the wife is any barometer, this movie is not for everyone (I swear, I will never refer to my wife as a barometer again). It is often compared with Monty Python, but more resembles the sum of its comedic parts – 2/3rds of the legendary British radio team from The Goon Show (Milligan and Secombe) and half of the famed stage act Beyond the Fringe (Moore and Cook), not to mention Dad’s Army’s Capt. Mainwaring himself Arthur Lowe, Help!/Willy Wonka’s Roy Kinnear, and dramatic greats Michael Hordern and Richardson. It’s a thoroughly crazy movie, and a solid precursor to the end-of-the-world comedy phase we went through a few years back, with the likes of This is the End, Seeking a Friend for the End of the World, and Rapture-Palooza. Hell, I think we’ve hit on another sub-genre I really dig, considering my long affinity for Dr. Strangelove and The Hitchhiker’s Guide to the Galaxy (the books – that movie only sorta works) – apocalypse satire.

I really supported this movie, though, because I wanted to see The Restaurant at the End of the Universe on the big screen – still waiting!

Coming tomorrow! Whose fucking baby is that?