Today! Because I had a little trouble with the fireplace –

There are certainly cooler, rarer, and better posters for this movie than the one I used above, but I wanted to emphasize how the movie was marketed. This, an animated Hunchback of Notre Dame – with all the molten lead battles, deformity shaming, uncontrollable lust, eternal damnation, and murder – had McDonald’s Happy Meal toys. I mean, they understood the subject matter, but they were still Disney, so they forged ahead the only way they knew how! 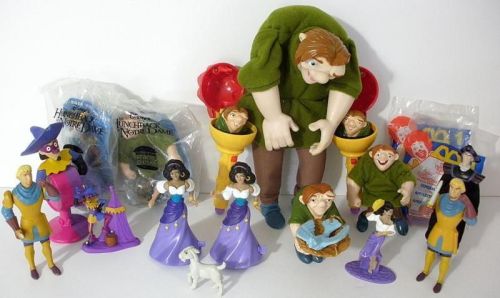 Not pictured: guards burning to death, implements of public torture

I will admit – somehow I acquired that large Quasimodo stuffed figure at center, which was shaped very much like a football in practice, leading to the timeless joke between my sister and I, “Let’s go in the backyard and throw the ol’ Hunchback around.” Never gets old!

But yes, I loved this movie when it came out, and will contend to this day that it has the best songs of any Disney animated film. Take whatever you like – Beauty and the Beast, The Little Mermaid, Frozen, Cinderella – and I’m putting Hunchback on top. Alan Menken and Stephen Schwartz put together one great tune after another on this soundtrack – “The Bells of Notre Dame,” “Out There,” “Hellfire,” “Topsy-Turvy,” with the only real clunky number being “God Help the Outcasts” – and yet none received Oscar nominations. I feel like original movie musicals should be automatic in this category, so it’s kinda surprising, considering the Song nominees in ’96 include super generic music from The Mirror Has Two Faces, One Fine Day, and Up Close & Personal. The lame Evita song that was tacked on to win awards did just that, so that makes sense, while “That Thing You Do!” obviously should have taken home the hardware from the group. But you could replace literally all five of these songs with Hunchback tunes. Fight me! (Okay, I’d probably still put “That Thing You Do!” in there)

This is my third favorite animated film, apparently, my second favorite animated musical, and my favorite straight Disney one (Rack your brains to come up with that non-Disney/Pixar animated musical! See you in late June!). Yes, it’s kind of an abomination in terms of the manner in which it castrates Hugo’s novel, but honestly, the fact that they even attempted this thing is the real accomplishment. Never mind it turning out as well as it did, and it holding up better than virtually all of the post-Lion King/pre-Frozen Disney cartoon products. I would also say its G-rating is a colossal mistake – I’m not one to get into this manner of issue, but the intense themes and human-on-human violence alone should’ve bumped this to PG, or even PG-13. But maybe I’m way off base. Is the Frollo musical number about how badly he wants to knock bells with Esmeralda a universally appropriate ditty? It’s right up there with Fantasia’s “Night on Bald Mountain” sequence as the most terrifying thing ever drawn by Disney hands. Plus, lots of sexy innuendo, which is thankfully missing in “Bald Mountain.”

Directors Trousdale and Wise previously landed on the list with #158 Beauty and the Beast, French cartoon adaptations being their wheelhouse, while Kevin Kline leads the advancing group, heading the Fours after showing up in #238 A Fish Called Wanda, #242 Chaplin, and #259 Soapdish.

But the spotlight today is going to the original voice of the gargoyle Laverne, Mary Wickes (who died during production – dialogue completed by Jane Withers), who played the busybody who so famous screwed up everything with no consequences in the third act of White Christmas. 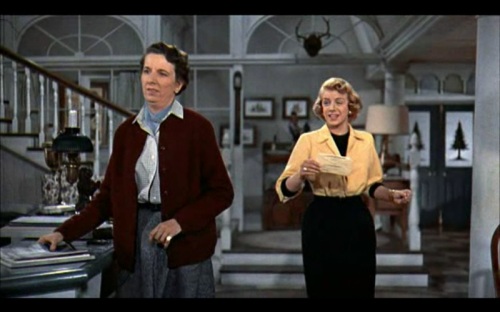 As I probably mentioned back in #345, why Betty didn’t chokeslam her the second she got back from New York, I’ll never understand

Coming tomorrow! Chapter One. He adored New York City. He idolized it all out of proportion –