The Set of 400: #90 – My Favorite Cross-Dressing Fortune Tellers

Today! Because they call me a slob, but I do my job – 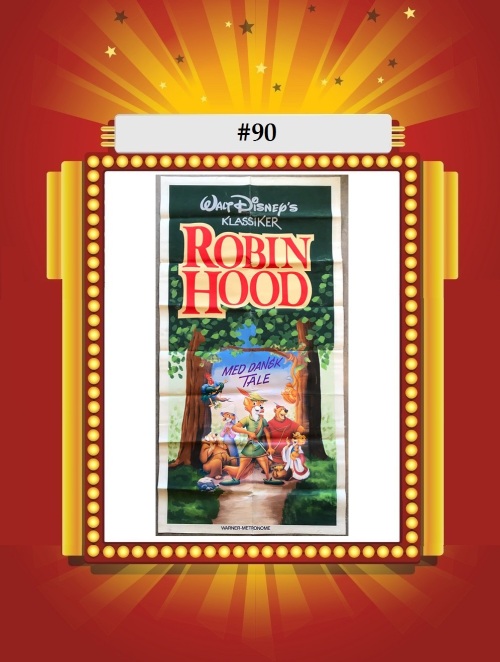 I never considered myself a particularly big fan of Robin Hood as a character or the rote Robin Hood story, which doesn’t vary much from film to film, but lo and behold, here is our third foray with the Merry Men on this list. Sure, the first one was #395 Mel Brooks’ Men in Tights parody, and the second was the primary source of that comedy – #293 Kevin Costner’s Prince of Thieves, so I guess this is the only one harkening back to the more traditional variety of forest rogue, the Richard Greene sort. The Errol Flynn/Olivia de Havilland/Basil Rathbone classic version did almost fight its way onto this list, and I’m kinda glad it didn’t in retrospect. 1% of the films being Robin Hoods seems like a lot. 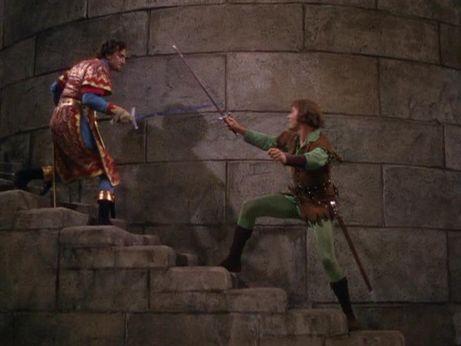 It does feature the best sword fight in the franchise

Also, good God, is Olivia de Havilland still alive? As of this writing she’s 102 and going strong with her lawsuits, and this is a near constant topic of conversation over in the Death Pool. Yes, even more than “Is Betty White/Kirk Douglas/Lindsay Lohan still alive?” My God, are they all still alive? Writing these way ahead of time makes conversation tough, folks.

We are going far off into the weeds here, not at all discussing one of the more unsung Disney masterpieces – their pseudo-Jungle Book repackaging, set to a number of great Roger Miller/George Bruns/Johnny Mercer tunes. Again, I have no perspective whatsoever on this movie – I’ve seen it something in the neighborhood of eleven dozen times in my life, maybe more, and thus am prepared to lustily debate its merits with little more than the sturdy thumping of my heart. What, you don’t like the Rooster narrator, who’s also sort of involved in the goings on? You’ve got a problem with the Baloo-as-Little-John casting, mere years after his chilling with Mowgli? Do you think Sir Hiss’s love life isn’t given the proper screen time? Get over yourself! This movie is perfect!

Okay, I don’t know, maybe it’s not perfect, but I’m hard pressed to really come up with any drawbacks. Despite being populated with foxes and lions and vultures, it’s a pretty straightforward retelling of the old legend. It must’ve also been quite the coup in its day, casting Oscar winner Peter Ustinov in a Disney film – common practice today but not something the Mouse House was doing on the reg back in the ’60s and ’70s. And as great as Ustinov’s cowardly, thumbsucking Prince John is, my movie MVP is the great Andy Devine as Friar Tuck – here a portly badger.

My fourth favorite animated movie, apparently, and second favorite movie from 1973, Robin Hood is not overly represented at either domestic Disney theme park, I can tell you from experience. Having gone my entire life never visiting Anaheim or Orlando, in one quick swoop the wife dragged me to both, where I looked high and low for Robin Hood-phernalia, and only found one plush ornament of the great fox archer.

This might be the only thing I bought at Disney, except one of those ice creams on a stick shaped like Mickey’s head

Director Reitherman joins the Three-Timers, having previously brought #263 The Jungle Book and #229 The Sword in the Stone to the list, while Jungle Book/#141 Ichabod and Mr. Toad actor J. Pat O’Malley leads the acting group by advancing to the Threes!

Oh, oh, and of all the great songs in this movie – “Not in Nottingham,” “Oo-de-lally,” “The Phony King of England” – the lone Oscar nomination for Robin Hood went to the song “Love,” which I obviously remember existing, but could not tell you one line from the song. Again, this is in a movie I’ve seen eleven dozen times. Way to be unmemorable, “Love”! And poor form, Academy!

Coming tomorrow! When a man’s partner is killed, he’s supposed to do something about it. It doesn’t make any difference what you thought of him –

One response to “The Set of 400: #90 – My Favorite Cross-Dressing Fortune Tellers”