Today! Because he may posture, so as to reveal his gaudiest nuptial plumage, spread his tail and erect his crest or inflate brilliantly colored pouches or parade, dance, fly with dizzying acrobatics, sing his most fetching love song – 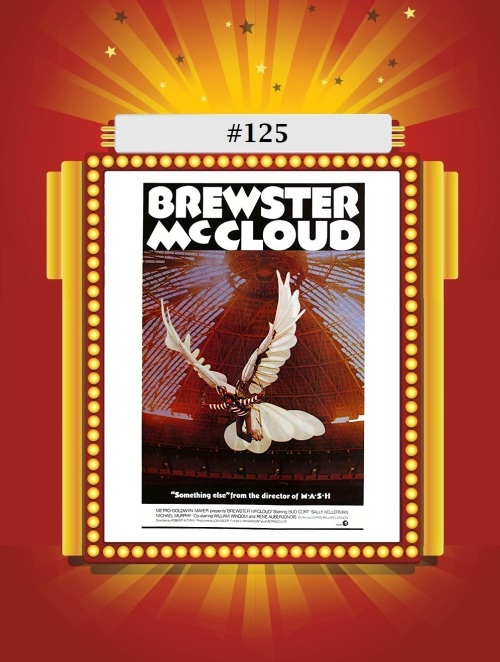 In going through a big tear of Robert Altman movies a few years ago – upon realizing that while I’d seen his most acclaimed movies, he made a ton of other films ranging from well regarded to strongly recommended curiosities – I finally tracked down a copy of what I remembered vividly from video stores when I was a kid. I always confused the title with a western – I’m guessing John Wayne’s McLintock or the Dennis Weaver TV show McCloud – but the tape cover was as above – this kid flying inside a dome, and it always stuck with me. And so began my love affair with the wholly original – even inside the Altman canon – Brewster McCloud. 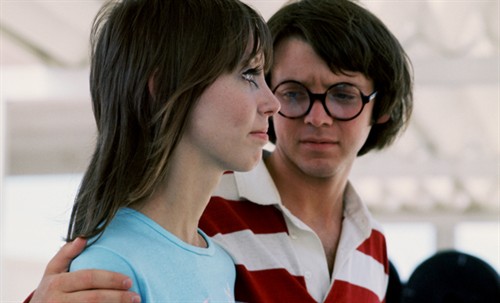 Cort and Duvall are typically wonderful

Made right after MASH, and thus employing a lot of the same actors, Brewster McCloud is an half allegorical pseudo fantasy about a kid who lives in the Houston Astrodome and yearns to fly, with the help of his supposed fallen angel friend Louise, played by Kellerman. There is also a string of murders subplot that ties in, which elicits the attention of out-of-town super cop Frank Shaft (Michael Murphy, and no relation to John Shaft – black private dick who’s a sex machine to all the chicks) and a professorial narrator (Auberjonois), mostly discussing birds and sex, and Margaret Hamilton, the Wicked Witch of the West herself, wearing ruby slippers. It’s pretty bonkers stuff, and way more to the fringe of normal than Altman’s other movies of the time. MASH and Nashville, while structured similarly with giant casts, overlapping dialogue, and sudden explosive twists, don’t have the singular driving narrative that Brewster McCloud does. His films of the ’70s swung back and forth between these grand atmospheric epics, including A Wedding and to a lesser degree Buffalo Bill and the Indians and McCabe and Mrs. Miller, and more off-kilter crime dramadies with a more cohesive story – California Split, The Long Goodbye, Thieves Like Us. Brewster is the latter, but is also plenty different, with its literal flights of fancy and heavy doses of surrealism thrown in for good measure.

And it’s probably a little too weird for the mainstream, so even though it was Altman’s first movie after the massive success of the 4077, it hasn’t really stuck in the collective consciousness too well. As of this writing, it hasn’t been released on Blu Ray, and I had a helluva time even buying the regular DVD from Amazon, as they seem to only be keeping one or two copies in stock at any given time. Hopefully the world of 2020 has proven kinder to Brewster! Check it out – the fourth Altman film to make the list, and (spoiler alert) my second favorite.

Altman is only the sixth Four-Timer director so far, joining Woody Allen, Hitchcock, Paul Thomas Anderson, Mel Brooks, and Richard Donner, following #396 MASH, #365 Popeye, and #219 The Player, and a number of his repertory actors are joining and advancing thanks to their multiple appearances in his films – Michael Murphy leading the way, heading to the Fives (MASH, #217 Magnolia, #270 The Front, #205 Batman Returns), Bud Cort (MASH, #285 Harold and Maude, #267 The Life Aquatic) to the Fours, Kellerman (MASH, The Player), Schuck (MASH, #196 Dick Tracy), Remsen (The Player, Dick Tracy), and Auberjonois (MASH, The Player) to the Threes, and Shelley Duvall (Popeye) and Margaret Hamilton – 33 years after #190 Nothing Sacred – join the Twos!

Coming tomorrow! I love you, but you don’t know what you’re talking about –