Today! Because I’m a fuck-up and I’m an outcast. If you get near me you’re gonna get it – 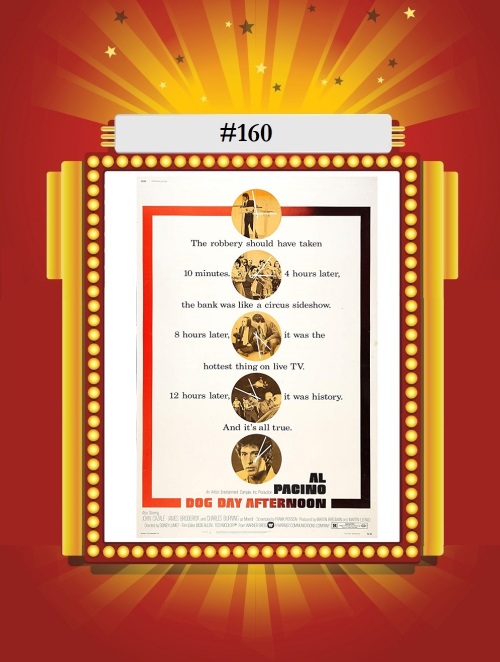 The bank robbery movie against which all others are forever judged, Dog Day Afternoon very basically serves as a template for how to sustain tension in a locked-in heist film where everything immediately goes wrong and negotiations drag on for hours. However, what Dog Day does different from nearly all similar films before or following is that it manages to continue throwing twists and bizarre surprises into the plot straight through to its sudden, stunning finish. Most bank hold-up films go for explosions and constant action to keep the audience engaged – here, it’s the wonderfully nuanced performances of Pacino, Cazale, Sarandon, and Durning, all masterfully guided by Lumet at his best.

Really, even though the entirety of the film’s action centers on the robbery, the movie is revealed as an ahead-of-its-time character drama/social satire as the motivations and psychological underpinnings come to light through the course of the plot. Coupled with the fact that the majority of the story – and many of the characterizations – are based on the real 1972 Brooklyn robbery, it serves as an amazing study in true crime adaptation for the screen, which can be a bit pedantic and overly beholden to the real events for the sake of verisimilitude, often resulting in less-than-stellar product.

Few directors had a better 1970s than Sidney Lumet – #374 Murder on the Orient Express, Network, Equus, Serpico, The Offence, The Anderson Tapes, The Wiz I guess – and Dog Day Afternoon just had the misfortune of landing in 1975, which I’ll continue to promote as one of the best years in film history. Hard to make elbow room with the likes of #182 One Flew Over the Cuckoo’s Nest, Nashville, and Jaws. But Dog Day did manage six Oscar nominations, including Best Picture, Director, Actor for Pacino, Supporting Actor for Chris Sarandon’s tremendous turn as Leon, and Film Editing, and won for Best Original Screenplay. It also had seven Globe nominations across the same categories, but included Cazale and Durning for Supporting Actor. This is famously Fredo Corleone John Cazale’s fourth of five movies, all of which were nominated for Best Picture (including both Godfathers, The Conversation, and The Deer Hunter) before his untimely death in 1978 at the age of 42. 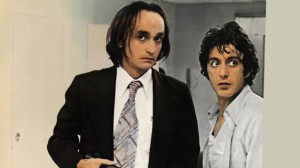 Following Orient Express, Lumet becomes the 48th Two-Timer Director, leading a small but significant group of actors into the guilds, including #196 Dick Tracy co-stars Pacino and Durning, and #222 Aliens’ Henriksen to the Twos, Sarandon (#237 The Princess Bride, #379 Nightmare Before Christmas) to the Threes, and the great Carol Kane (#227 Scrooged, #253 My Blue Heaven, Princess Bride) to the Fours! Spotlight!

Look, Gotham was largely nonsense, but Kane was great as the Penguin’s mom

Coming tomorrow! In fourth grade, I stole my uncle Max’s toupee and I glued it on my face when I was Moses in my Hebrew School play –