The Set of 400: #195 – My Favorite Alexanderplatz Exposition

Today! Because we don’t have a choice –

Just so you’re prepared – this is my least favorite of the Bourne trilogy, and even this one cracked the 200. The most recent Damon outing – Jason Bourne, I want to say? – wasn’t eligible, and wasn’t anything special, and that random Jeremy Renner movie was fine, but the first three – man, those are exciting, highly interchangeable films.

Like the Mission: Impossibles, these all take place in random, similar looking foreign cities, which you get to see whip by out the windows of speeding cars. Bourne will get involved in some conspiratorial bullshit in a frowsy apartment or abandoned train station, but then it’s right back to running. The first movie is an all-out chase, as they are coming for Bourne hard, the third movie is when he finally manages to piece the whole puzzle together, leaving the middle chapter – which is a straight revenge film, albeit also chocked full of chases, and an ending that gives some closure, but obviously benefits from the existence of a third film. Second films are hard, you guys.

With the obvious exception of the Breakin‘ franchise

I’m trying to think of film trilogies where I prefer the second film best – The Dark Knight is probably the top, but that is squarely in the camp where I act like Batman Begins is a prequel that I never need to watch again. Spider-Man and X-Men and Superman fit the bill. Maybe it’s just a comic book thing? Otherwise, it almost always follows that I like my trilogies first movie best, last movie next, middle movie worst. Some of those entire trilogies are on this list. Some go 1, 2, 3 in order of favoritism. You’ll have to wait and see which of these categories ol’ David Webb falls into (That’s Jason Bourne to the uninitiated! The Webb Supremacy would’ve been dumb!).

Where the first movie pits Bourne against obvious baddies Chris Cooper and Clive Owen, Supremacy made the solid choice of adding the skeptical Pam Landy to the bad guy bunch, played with expert nuance by Joan Allen. Like, you had Julia Stiles’ Nicky as the sort of neutral agent in part one – and her role just continues to grow as the series progresses – but she has no authority over anything, so it’s Bourne against the world from the jump.

Nicky was a huge spy-thriller liability, due to her reliance on massive scarfs

They also swapped out the excellent first film’s director Doug Liman for the equally capable Paul Greengrass, and made arguably a better action film. Those chases! Those punches! Fun! I don’t necessarily prefer it – obviously – but the second film is still an excellent spy thiller, only really suffering because of the middle-childness of the whole thing.

We’ve got three new Three-Timers today – Damon (#249 Ocean’s Eleven, #208 Jay and Silent Bob), Allen (#214 Nixon, #330 Face/Off), and Cox (#278 Zodiac, #320 Match Point) – driving membership up to 143 over there! Man, we might need to start just focusing on Fours and above! Where is this going to end? I’m already largely skipping Two-Timers in posts, as there are literally 458 of them now. Do you know what the catering bill at the banquets is at this point? Knock your eyes out bad! 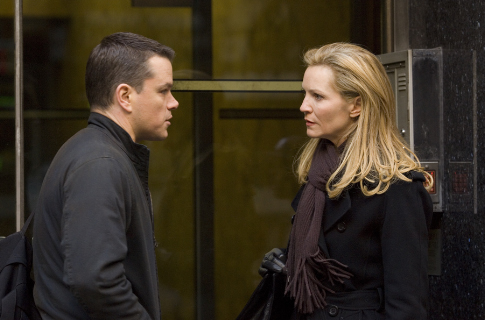 Fellow Three-Timers in The Bourne Ultimatum, which we’ll get to in a little while, but will we deal with Identity first? Stay tuned!

Coming tomorrow! I’ve always had a thing for Santa Claus, in case you didn’t notice –