Today! Because I can’t be a king, Archimedes. I don’t know anything about ruling a country –

Another staple of the ’80s household, The Sword in the Stone seems to fade from the collective memory more with each passing year. I had never been to any Disney theme park before 2016, and then in rapid succession went to America’s both in six months, and for the life of me I didn’t see a lick of Sword in the Stone merch, and these are places simply teeming with swag. I could be wrong, but it seems like the handful of Disney films we really watched to death as kids are sorely represented now, in favor of recent hits (which makes total sense) and massive favorites, of the Dumbo, 101 Dalmatians, Snow White variety (which also makes sense). Couldn’t they create a Curiosities Corner, for mid-range animated films that aren’t exactly beloved classics but still have a passionate fanbase? There are a number of these films still to come, so I won’t completely illustrate which I’m referring to, but Sword in the Stone absolutely fits the bill. 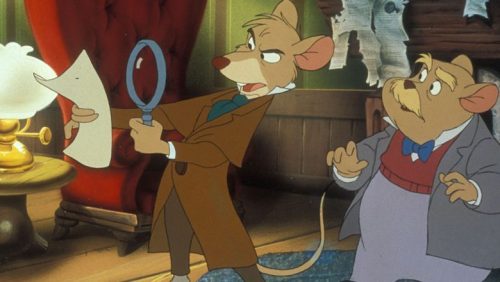 Not on the list, but The Great Mouse Detective didn’t warrant so much as a Ratigan jock strap either

Still long before the era of celebrity voices, they assembled an excellent group of TV actors (such as westerns staple Karl Swenson as Merlin, Mr. French himself Sebastian Cabot as Sir Ector, and ABC Batman’s Alfred, Alan Napier as Sir Pellinore) and voice professionals to bring this comic re-imagining of the Arthurian legend to life. It’s got a bunch of fun songs by the Shermans, Richard and Robert, including “That’s What Makes the World Go Round” and “Higitus Figitus,” and the terrific wizard’s battle between Merlin and solid villian of the piece, Madam Mim. Man, is this thing long overdue for the live action remake! I know Disney is working their way through the back catalog, with The Jungle Book and Beauty and the Beast and Cinderella and Aladdin and all, but let’s get some of the crazier cinematic tales going. Who’ve you got playing Merlin in 2023’s live-action Sword in the Stone?

Time to give Sam Neill another shot?

Director Reitherman and Cabot join their respective Two-Timers clubs, both on the strength of #263 The Jungle Book (Cabot having been the voice of Bagheera). Reitherman joins ’50s Disney director Clyde Geronimi as the only purely animation directors to enter the guild so far!

Coming Monday! Adults are, like, this mess of sadness and phobias –