Today! Because you can’t have six cards in a five card game –

A remake so much better than the original that it’s almost unfair to mention its existence, 2001’s Ocean’s Eleven was the movie that I think everyone assumed Steven Soderbergh could make, but never would. Sure, Out of Sight hits largely the same tone, and with Clooney, too, but it isn’t quite the bustling movie star popcorn extravaganza that this film is. But while in some cases I’ve advocated that a filmmaker winning an Oscar was detrimental to society as a whole – Spielberg’s four year hiatus after Schindler’s List, James Cameron’s everything after Titanic, etc. – Soderbergh’s win for Traffic may have actually freed him up to make something more purely fun, purely Hollywood than we would’ve expected.

And boy did it deliver. Yes, the sequels were underwhelming and unnecessary, straight through to last year’s okay-if-beating-a-dead-mare Ocean’s 8, but the first movie is a dazzling gem of subterfuge and sleight of hand. From Danny Ocean’s first appearance, getting out of jail in a full on tuxedo, this movie is chocked full of style, attitude, and more than a little winking-at-itself humor that totally works. Sure, with a cast this large and accomplished, it’s bound to feel like some folks got a little wasted through lack of use, but they do manage to give everybody just enough character bits and snappy lines to satisfy – for the most part.

This movie is also single-handedly responsible for creating the George Clooney movie star persona that everyone so readily accepts as having always existed. I’ve had this conversation many times – and I know I’m not 100% in the right – but I aver that Clooney isn’t really a movie star at all – he’s clearly a filmmaker masquerading in a movie star’s body. His later career bears this out more, but early on we were just getting Clooney foisted on us, in a lot of bad-to-okay, widely unsuccessful movies, and told to accept that he was a star, not unlike a recent years Charlie Hunnam or a Garrett Hedlund or a Taylor Kitsch. Seriously, look at Clooney’s movie run in the ’90s – From Dusk Till Dawn (meh), One Fine Day (better hit, similar meh), Batman & Robin (WOOF), The Peacemaker (woof, lower case), Out of Sight (great, middling grosses), The Thin Red Line (which he appears in for two minutes), Three Kings (great, okay hit). It’s not until you get to The Perfect Storm in 2000 that he appears in a movie that made any real money. Oh, and Ocean’s Eleven is still the highest grossing movie he starred in (don’t give me that cameo in Gravity as indicative of anything). George Clooney! Movie star? Filmmaking savant! He’s been nominated for eight Oscars in six different categories, but has only starred in four $100+ grossing movies, three of which are Ocean’s films. I’ll rest my case here, but I think it makes a lot of sense. Is a movie star simply someone who appears in hit movies? I’d say yes – it can’t just be anyone who appears in a movie. It’s a moniker with frowzy connotations, for the most part, isn’t it? It somehow cheapens any acting ability. Okay, let’s just call him George Clooney, Nespresso Pitchman from now on. Settled.

Besides being named a top ten film from the National Board of Review, Ocean’s Eleven is pretty light on accolades. Can we at least acknowledge Best Throwaway Character Trait, for the fact that Brad Pitt’s Rusty is constructed entirely out of on-screen eating? 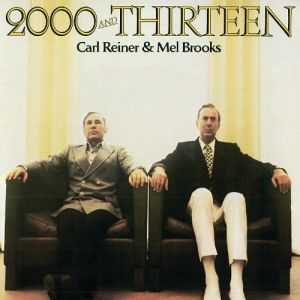 If you haven’t heard them, I cannot recommend the 2000 Year Old Man albums highly enough

Coming Monday! And who’s to say I won’t be seeing what you’re seeing in court?