Today! Because I will not submit – 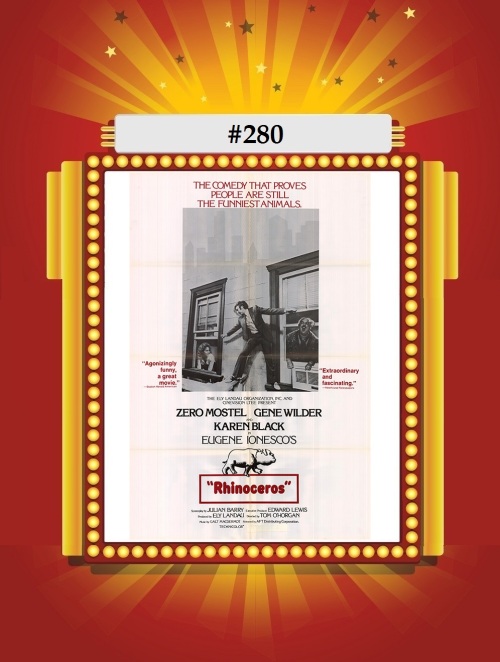 Just barely reaching our minimum requirements for inclusion on this list, Rhinoceros has virtually never been shown in a movie theater. It was produced as part of a brief early ’70s experiment called the American Film Theatre, wherein popular stage plays were adapted to film and had limited engagements at select theaters. It really was an idea ahead of its time, as Fathom Events does similar releases nowadays with operas and British theater offerings, but in ’74 it wasn’t exactly a monster hit concept.

Some of these productions have found minor success on home video, particularly Lee Marvin’s Iceman Cometh, and this ingenious re-teaming of 1968’s The Producers, with Zero recreating his Tony winning turn as Jean/John from the 1961 staging of the Ionesco play, and Wilder in the less flashy Stanley/Berenger role. It’s not a movie or play for everyone, with its wildly absurdist plot and heavy, talky scenes, but the novelty of there existing a Rhinoceros movie has always outweighed the inherent stagey-ness of the film for me.

The heavily allegorical story revolves around an epidemic of ordinary citizens suddenly turning into monstrous rhinoceroses, rampaging through town, destroying and killing at will. Meanwhile, those as yet unaffected are trying to continue about their daily lives, including office clerk Stanley, even as his girlfriend Daisy and best friend John transform. On the surface, it’s obviously about the dangers of conformity – Ionesco’s play was written as a response to fascism – and it can be applied to virtually any time period and any struggle against totalitarianism and/or oppressive regimes. So – because of the way our country and world work – that makes it a universal story that will likely never go out of relevance. Bummer, I know.

It’s a thinking man’s comedy, and a far cry from what Wilder or Mostel are popularly known for doing, but these were old theater pros before breaking into movies, so the appeal of making this low budget experiment of a film is obvious. Plus – one of the great benefits of these adaptations existing – we get to see a variation on Mostel’s award winning work, capped by the amazing apartment scene between John and Stanley where John becomes a rhinoceros. It’s riveting acting, and the film’s obvious highlight, even if the scene and the movie overall feels a bit hindered by the lack of significant budget or effects. They make do, splendidly I think, but if you’re not much for seeing stagey live theater, you may not enjoy this film either.

The American Film Theatre provides us with two new Two-Timers club members, as #359 Willy Wonka and the Chocolate Factory star Gene Wilder and #294 1941′s Don Calfa both join up today! 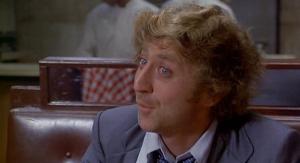 Gene’s got a solid Waco Kid vibe in Rhinoceros

Calfa, here with Frank Fontana himself Joe Regalbuto in The Star Chamber

Coming tomorrow! If you build a jacuzzi, they will come –