Today! Because it’s not my goddamn planet. Understand, monkey boy?

The Adventures of Buckaroo Banzai Across the 8th Dimension (1984)

Playing like the third or fourth sequel to a property that didn’t previously exist, The Adventures of Buckaroo Banzai Across the 8th Dimension doesn’t waste a ton of time explaining the hows and whys of the title character – a brain surgeon/rock musician who heads up a crime fighting team named the Hong Kong Cavaliers, none of whom appear to be from southern China. But there’s no reason to get too bogged down in all that – this movie plunges you straight into the action, with Banzai breaking the ethereal barrier to the 8th Dimension, and all the alien invasion/global intrigue that follows. 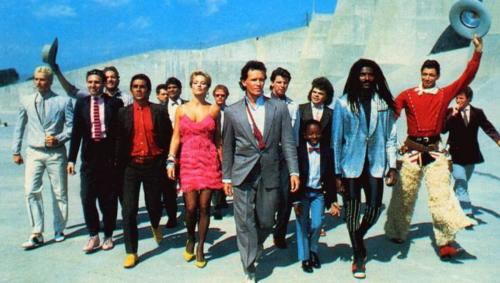 It’s a hyper-stylized sci-fi actioner with loads of eccentric characters and convoluted science to quickly acclimate yourself to, but once you get into the swing of this movie, it’s pretty entertaining. Lithgow’s villainous role as the warped Dr. Lizardo is standout madness, supported by the equally wacky work of alien-in-disguise John Bigboote (Christopher Lloyd) and John O’Connor (Vincent Schiavelli). And while the plot is insane, mainly due to the characters multiple jobs/disguises/interconnected roles, it tries its best to keep the audience up to speed. The first time through it can be a little challenging to completely follow, but there are enough solid-ish early ’80s special effects and fun performances to keep you entertained.

Plus, this cast! Lithgow, Lloyd, the always underrated Ellen Barkin in her first really good role after Diner, some pretty great early Goldblum in his first really good role after The Big Chill, Lewis Smith (who we watched to death in a forgotten life-after-death ’60s era comedy The Heavenly Kid, which almost made this list), and Banzai himself Peter Weller, future Robocop and Syracuse professor. Sure, it really looks like an ’80s sci-fi movie, which is tough to get around, but the inventive craziness of the plot more than makes up for some junky make-up.

Buckaroo Banzai is one of those properties often mentioned for potential remakes/sequels/spin-offs and never comes to anything. There have been a few comic book off-shoots, and a video game once upon a time, but that’s about it. I’m confident someday we’ll see the Hong Kong Cavaliers on the big screen again, but are these characters sticking in the public consciousness here 35 years on? Virtually the entire cast is still alive, let’s get a way down the road sequel with the elderly adventurers! Make it happen!

Some sci-fi movie awards and little else adorn the dashboard of Buckaroo’s inter-dimensional truck, so let’s acknowledge this movie for its Best Choreographed End Credits Sequence, an out-of-nowhere march through an aqueduct to Michael Boddicker’s catchy end theme. Terrific!

Coming tomorrow! People who try to hang on to their individuality always come to a bad end –