Today! Because if you pick up that keno card, I’ll kill you –

Albert Brooks has had a terrifically acclaimed career, but the path he’s taken is an odd one. He created taped segments for the first year of Saturday Night Live, had supporting roles in notable films like Taxi Driver and Broadcast News, did legendary voice work in a handful of Simpsons episodes and as Marlin in Finding Nemo/Dory, and has always managed to hang around despite largely ignoring his true calling – directing movies, which he’s only done seven times.

My second favorite of those is this abortive road trip family disaster, as his ad exec David abandons corporate life and sets off with his wife to see America and live off their nest egg. This is a movie I didn’t notice until I was older – Brooks’ movies can’t much resonate with the younger set – except for the memorable if confusing VHS cover, appearing frequently in young Joe’s life at your Prime Time Videos and Blockbusters. But it is a hilarious, small film with a wonderful script, and terrific lead work by Brooks and the film’s MVP, Julie Hagerty, as his amenable, frustrated, destructive wife Linda. It’s that all-American fantasy of throwing your job in your boss’s face, storming out, and hitting the road to live the way you want – before the reality of this choice socks you and sends things spiraling apart. That being said, it still seems like a pretty fun life plan, right?

No matter how many times I pitch it, Sarah is not supportive of this life plan

The screenplay won top honors from the National Society of Film Critics, and the overall reviews are outstanding to this day, but like most comedies, it was largely ignored awards-wise in its time. This despite featuring the Best Hoover Dam Argument ever put on film – not an argument about the Hoover Dam, mind you, an argument staged at the actual Hoover Dam.

Surprise Two-Timer today, with #361 Bloodsport‘s excellent sidekick Donald Gibb making another appearance! He often played tough guys/ex cons for laughs, and Lost in America was no exception! He was a great visual punchline, but could also deliver some funny gags as an actor, leading to lots of television work as well, including stops on Cheers, Night Court, Seinfeld, and The X-Files. Spotlight! 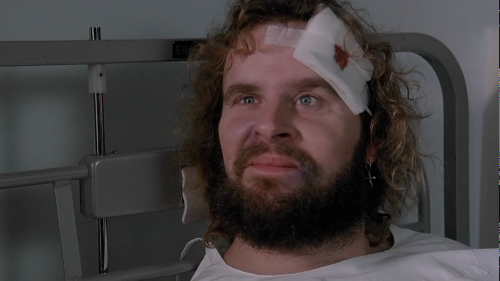