Today! Because Bertram got really into the ’60s, and no one ever saw him again –

Clearly, 20th Century Fox did not know what they had on their hands with The Sandlot. I mean, jeez, look at those taglines! “They’re the best buddies in the entire history of the world”?? Even if it’s meant tongue-in-cheek, it’s not quite tongue-in-cheek enough to be clear. And the other tagline just makes this out to be a sun-dappled nostalgia fest. This is a legitimately hilarious summer vacation fantasia replete with giant monster dog things and the Great Hambino. As endlessly quotable as any kids movie ever made, The Sandlot may have initially been treated as just another disposable calendar filler by the studio, but I would go out on a limb to say it’s a borderline American classic, and one of the three or four best baseball movies ever made.

Is that taking it too far? I don’t think so. Baseball is not an inherently filmic subject – sports movies that really work tend to be about individuals, not teams, as that is easier to convey dramatically. Sure, there are outliers, but this fact is the reason boxing is by far the best movie sport subject, even though it is entirely dying in the culture. However, Sandlot gets it – team sports comedies work far better than dramas, but even then they have to go far afield in the characters’ lives to fill out the running time before the big game. Sandlot doesn’t have a big game. Baseball is the crux of the whole movie, it brings everyone together and occupies the majority of the running time, but it isn’t a good-guys-thwarting-bad-guys film. It’s just screwing around and being pals and lusting after lifeguards and eating s’mores.

Wendy Peffercorn, am I right?

They were lucky to find a handful of terrific kid actors – Guiry, Renna, and Leopardi especially – working from a terrific script by director/narrator Evans, who has not seemed to parlay this into long-term success. Shame! He was born in Wilkes-Barre! NEPA love! No major awards or nominations for this childhood epic is a crime – how about Best Rollercoasting Vomiting, for starters. Not to mention the film’s gripping climax, Best Pickling of the Beast.

I was just a little too old when this movie came out to truly appreciate it in its day, but, thankfully I had the younger sister to play it endlessly and root it in my consciousness, not unlike #398’s Ghost. Shoutout to Susie! Way to come through!

In another surprise, 3rd act cameo, not unlike his appearance in #378 Sneakers, James Earl Jones popped up in The Sandlot to save the day, and to join the elite Three-Timers club! Along with his classic voice work as Mufasa in #391 The Lion King, Jones joins Torn, Elwes, Tobolowsky, and Bacon as the current most frequent list members. Who will be the first Four-Timer? Your guess is as good as mine, I’m tracking this in real time as I’m writing them! 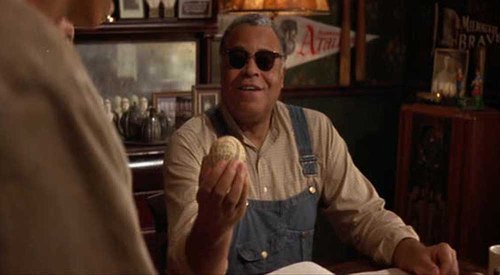 Coming Monday! You don’t want to see mommy lying in a cigar box covered with licorice –