Today! Because sometimes when you want something so bad, you do just about anything to get it –

Okay, look, right off the bat, let me say that The Nutty Professor is an almost unconscionably cruel movie, across the board. I don’t know if any movie in the history of film has such diabolical focus on one topic for jokes, and is in any way watchable. The sequel doubles down on this to a ludicrous degree, so that it is barely a movie at all. And the manic barrage of jokes doesn’t exactly lessen this idea as the years wear on – it is aging horribly. It may already be past redemption. All this I will acknowledge, and my enjoyment of this movie is my shame, but I’m trying to be honest here. 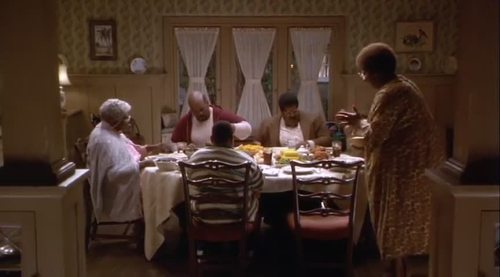 But, come on, it’s pretty impressive

What I can still watch and enjoy about the sociopathic preying on the overweight is Eddie Murphy’s stunning performance. It definitely gets lost in the jokes, and appreciation for it gets muddled in the haze of the blatant stupidity of the proceedings, but really, think about this movie – not the sequel, but this one. The dinner scene is amazing, with Murphy distinctly portraying all the members of the Klump family, and his Buddy Love is wonderful hyper-zany madness, but what I’m talking about – what still stays with me – is his sympathetic, heartbreaking work as Sherman. Look at the real plot of this movie – this brilliant scientist has so much self-loathing simply because of the way he looks that he nearly destroys himself trying to become what he thinks the world will prefer. How fucking sad is that? The Jerry Lewis original may be marginally better (I’m not sure about that), but Lewis wasn’t the actor to pull off the gravitas of this role. Murphy, after a symphony of fart-jokes and fat put-downs, just rips your damn heart out with Sherman’s struggle to embrace himself for what he is, stuck with a world he can’t be comfortable in. It’s a performance that deserved a better movie, really.

It’s a funny movie – it really is – even if you’re going to be uncomfortable some of the time (or at least you should be, you monsters), and the comically physical struggle between Sherman and Buddy is legitimately compelling, but in all this late ’90s gross inappropriateness, there’s this sweet, shining performance, buried in make-up, that is the best of Murphy’s career.

And as fully nonsensical as it is, his work in the sequel is still pretty amazing, too. I’m just saying.

Eddie’s performance wasn’t totally ignored in its day – snagging a Golden Globe nomination and a surprising Best Actor win from the vaunted National Society of Film Critics – but the only Oscar love came for that extensive Make-Up. But no Best Pocket Hercules, for the only non-Murphy Klump member Jamal Mixon? Unfair!

We’ve also got one of the more unexpected Director Two-Timers joining the list today, with #351 Liar Liar helmer Tom Shadyac marking the seventh entrant to the club! Shadyac’s career also included the first Ace Ventura, both of the Bruce/Evan Almighty installments, and the godawful Patch Adams. Still, ’96/’97 that guy had comedy on lockdown!

Coming tomorrow! Are you trying to wake it up? It just went to bed!