The quality of Coen brothers’ films may have gotten more than a little uneven as the years have gone on, but they’ve never been uninteresting. They’ll pop up a bunch over the next year – they squarely fit my earlier definition of directors whose films I will run out and see no matter what – but their first is this darkly comic family struggle that gave us the fantastic Michael Stuhlbarg as the long suffering Larry Gopnik. His marriage falls apart, his kid is a bit of a mess, and the rabbis are no practical assistance, while Larry continually melts down. It’s a tremendous performance in a largely enjoyable film, mostly ignored on its initial release.

It did manage a Best Picture nomination – they’d just expanded the number of nominees up to ten for the 2009 awards, and a small, mostly overlooked film like this was a main beneficiary – in a year I clearly like more than I thought. This is already the fourth ’09 film, joining #377’s I Love You, Man, #383’s Sherlock Holmes, and #387’s Cloudy with a Chance of Meatballs. At a quick glance, it looks like the next film doesn’t come until #329, so if you’ve only come here for 2009 movies, see you again on May 31st!

Serious Man only managed one other Oscar nom, for the Coens’ screenplay (the fourth of their sixth writing nods), while Stuhlbarg was nominated for Best Actor – Comedy or Musical at the Golden Globes, but let’s also acknowledge this movie may have the Best End Credits Disclaimer – “No Jews were harmed in the making of this motion picture.” Also, really, what this film deserves more than anything is Best Chalkboard – which became a pretty prevalent internet image, even with most people not realizing it’s from this film. 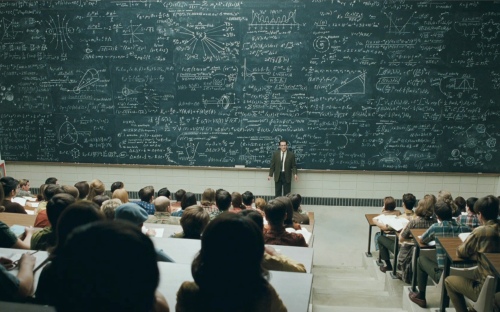 And if you had told me that any Big Bang Theory actor would’ve been a Two-Timer, maybe I might’ve guessed Johnny Galecki? But no! #372 Walk Hard‘s Simon Helberg! Huh!

Coming tomorrow! Don’t be a jackass, I’m just trying to tell you why Annabel hates you –