The Wedding to End All Weddings

Ladies and gentlemen, the plan is in place. Cetta/Rusakiewicz, long thought to be an elaborate ruse meant to drum up interest in a potential presidential campaign, has transitioned into a bona fide lovetastic relationshipathon. And after seven and a half years of contemplation and debate, we’re locking this thing down for good and all. Cetta/Rusakiewicz 2011! The wedding that will put all others to ignominious shame!

Excitement is at an all time high here in the relationship!

Okay, that might be taking it a bit far. I mean, what sort of plan could we come up with that will trump all other nuptials in the long history of nuptials? Are we getting married on the moon? Will the attire be entirely made of cake? Is Richard Dawson performing the ceremony?

The short answer to these questions is No, Probably Not, and Maybe, If He Lives That Long. 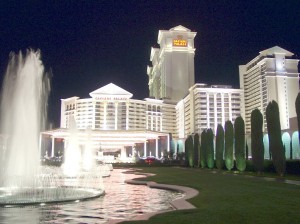 Reserved and understated, that's what we're aiming for

The real reason for this hyperbolic build up is that we’re firing off this commitment rocket in the most fitting and sensible setting we could think of – Caesar’s Palace in lovely, quaint Las Vegas, Nevada. Now, before you scoff with your “Ooooo, how original, getting married in Las Vegas. I give it three weeks before you’re hurling each other in Lake Michigan,” consider this – who plans destination weddings in Las Vegas? No one. People run off and get married in Las Vegas, usually because they hate their families and/or are knocked up and need things legitimized post haste. But, we’re actually inviting our families, and there are no Cetta/Rusakiewicz offspring anywhere on the upcoming calendar of events.

Still, this plan and the pressure to make it the most memorable Vegas event since Roy got chewed up by that tiger has given way to many crazed and ludicrous ideas for the day itself. As many of you know, or may have guessed by now, weddings aren’t exactly my thing. First off, I’m a guy. Secondly…well, there is no secondly. I’m a guy. But even though putting this thing together in, say, Binghamton, would’ve been the easiest option for virtually everyone involved, and we instead chose to drag all loved ones out into the middle of the desert across the country, we need to make this baby memorable.

So I’d like to run down the plans that have thus far been abandoned, to give you some idea of the twisted machinations of the Cetta/Rusakiewicz Planning Committee. Some of these things were on the table a long time, and most weren’t discarded because they were inherently bad or potentially dangerous. It was usually due to financial reasons, or the logistics involved in fitting an rhinoceros into our suite.

The Circus Wedding – acrobat lessons secured and special footwear ordered, we still decided to toss this spine injury waiting to happen on the heap, after actually visiting Las Vegas and seeing that the one place most suited for this wedding – the Circus Circus – is almost across the board a busted hellhole.

The Frank Sinatra Wedding – listen, Frank’s great, I like Frank as much as anyone, but he’s dead as the Christmas goose, and getting married by some impersonator, albeit very Vegas-y, doesn’t exactly scream class and good taste, like, say…

The Las Vegas Zoo Wedding – which only stayed in the running as long as it did because we figured if we got the guests liquored up enough, there was a pretty good chance someone would hop a fence and wrestle a bear. We’ve been trying to put this together at the Lincoln Park Zoo in Chicago for years now, but we’re never near enough to the zoo when anyone’s drunk enough (Munchak, in particular). Someday!

The Atomic Testing Museum Wedding – really, what screams “Lifelong romance in the modern age” like the history of nuclear bombs as the backdrop for the taking of the vows? I’m not sure how much radiation you’re actually exposed to while there, but we figured any amount was too much of a risk. Have you ever heard the stories about the movie The Conqueror and its filming? Seriously, look it up, that’s reason enough right there. 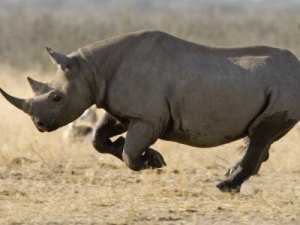 And don't get in his way if it's open bar

The Rhinoceros in the Suite Wedding – we thought it would be a cool metaphor for something, but nothing ever came to mind. Then, after contacting Caesar’s, they said their elevators likely couldn’t accommodate an unpredictable, 4,500 pound horned machine of mayhem. Then we found that renting a rhino is amazingly complicated. Finally, we realized stealing a rhino involved equipment and transportation we simply couldn’t squeeze out of the wedding fund. And so, goodbye, Rhino Wedding.

So with these plans scrap-heaped, we got down to more sensible business – how exactly can we hold this thing and still make a profit? The answer immediately was “We can’t,” and we looked for other cost cutting measures.

(Admittedly, this was during a period where we felt Caesar’s was doing their level best to rob us blind over the cost of Tanqueray, which brought out my immense penuriousness)

The Groupon Wedding – I’m still not convinced this is a bad idea. As we’re not having what you’d call a conventional reception – it being dinner somewhere followed by drinks and debauchery at the suite – I figured we could seriously cut down on the grub budget if we just insisted everyone snap up the same Groupon to some restaurant when offered. We were at Defcon 2 of the trigger getting pulled on this plan a few weeks ago, when the Queen Victoria British Pub threw their “$10 for $20” deal up. I had emails and texts at the ready, when Sarah 11th-hour kiboshed this nonsense. Really, this deal only worked in conjuction with an earlier plan, as the Queen Victoria British Pub is located in the Riviera Hotel and Casino, across the street from, you guessed it, The Circus Circus. 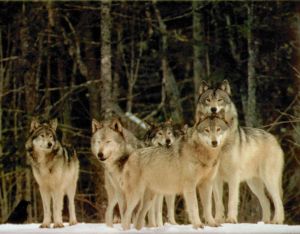 It might be time to start training for the reception, and sharpening sticks

The Most Dangerous Game Wedding – this has since been transposed over the initial honeymoon plan, but at first I thought it would be fun to get everyone out in the desert – somewhere between Vegas and the Hoover Dam – give everyone a sharp stick and a canteen, and see how many scalps you can bring home as wedding souvenirs. Not each other, mind you, the invited guests will work as a team. But passing tourists, wedding crashers, and/or wolves are in for a violent first dance with the bride, if you know what I mean. It’s also very much an “Eat What You Kill” reception, so…sort of a buffet.

As mentioned above, this is now likely a part of the honeymoon, where we travel to remote areas and test our survival skills, Oregon Trail style. This issue is still under debate.

My cheapness dissolved shortly thereafter, before the guest list was cut down to five and the ceremony was moved to the First Little Chapel and Keychain Emporium of Henderson. Caesar’s ceased some of their exorbitant scheming, and we got back on track plotting the lunacy that will either make this event memorable in its awe-inspiring grandeur or notorious for the sheer number of arrests and stitches required in the aftermath.

And after long soul searching, we’ve come to the conclusion that yes, everyone is invited! Okay, not everyone. The reception portions of the day are being held in spaces so limited that I’m not sure I can even go to them. But as for the wedding itself, and Las Vegas as a whole, feel free to drop in! Even though it has a reputation for being an insular, locals-only city, we’ve struck a deal with the city council to allow seedy out-of-towners to come visit and spend their money and wear their nicest t-shirts. And heck, that sounds like you in a nutshell! Yes, even you! Just don’t make too much of a nuisance of yourself and the rest is cream cheese. See you there! 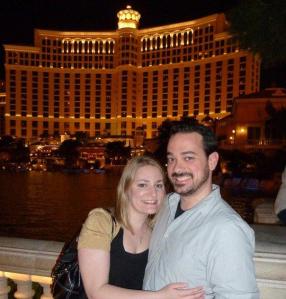 More of this, but with less beard

The Cetta/Rusakiewicz Marriagepalooza is being held on December 9th, 2011 in the Juno Garden at Caesar’s Palace, Las Vegas, NV.