The Sad Life and Times of Mac Tonight 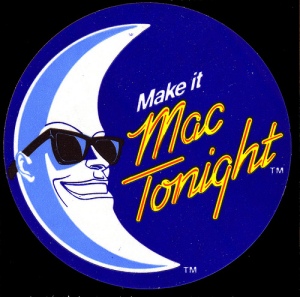 "For the last time, my name is not fucking Moonman"

It’s a dingy nameless underground bar on the outskirts of Bangalore, and palpable misery hangs in the air.  A Kingfisher sits on most of the knife-scarred tables, as patrons stare suspiciously at one another with rheumy eyes out from underneath heavy, weathered lids.  The sun has never touched the dank dirt floor, and a mop isn’t a regular tourist in the john.  The bartender keeps a cricket bat wrapped in barbed wire within arm’s reach at all times.  He has a tattoo on his forearm that just says “Screw face,” but in Kannada it’s much prettier.  The lights, already low enough to develop pictures by, sink even further toward the pitch.  A busted upright piano which looks to have been around since well before British occupation is wheeled out with squeaks and groans, and a shadowy figure takes his seat behind it.

“Hello there, Bangalore!” he shouts.  There is no response.  “Oh, I’m sorry,” he adds, voice gargling sarcasm, “Bengaluru.  I’m sorry, I was here before it was fucking Bengaluru, so I call it Bangalore.  If you’ve got a problem with ‘Bangalore’, don’t let your ass get struck by the door!  On your way out, I mean, it just doesn’t fit with the rhyme.”

Then he launches into one of his notable songs, a jingle that sold millions of all beef patties with special sauce, lettuce, cheese, pickles, and onions on sesame seed buns.

“When the clock strikes half past 6, babe
Time to head for golden lights
It’s a good time for the great taste — dinner!
At McDonald’s, it’s Mac Tonight
Come on, make it Mac Tonight!“

And the drunks continue drinking, the whores continue hustling, the bartender keeps an eye on the shifty eyepatch edging closer and closer to the cash box.

This is the current shocking status of Mac Tonight.

“It’s all a big nothing,” Mac says, a massive unlit cigar protruding from his giant crescent moon head.  “The ad business, the fast food business, it’s not all goddamn Happy Meals and hand jobs.  We’ve gotta get into this again?  The whole miserable tale?  Jesus Christ, it’s been twenty years.  More, even.” 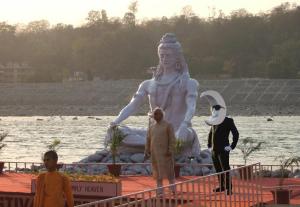 A three day beard makes the long trek from ear to ear, a good thirty inches down the chin bypass.  His eyes are still hidden by his trademark glasses, but the crow’s feet tell of many a hard night scraping out a living on fame that has long since passed.

He grows silent, staring off into the past, thousands of miles away.  “Who woulda thought a kid with a freakish big moon for a head could make the big time,” he murmurs, no question in his voice.

Little is known about Mac Tonight before his meteoric (pun intended) rise to stardom in the mid-’80s, and for his part the lunar lounge singer isn’t talking.  “Fell from the stars,” he says, “A gift from above.  A brother from another mother, what’s the difference, who gives a fuck.”  This much is true – Mac Tonight grew up Harry Weintraub in Syosset, Long Island to largely absent parents Sid and Mildred.  He briefly attended SUNY – Purchase in upstate New York before relocating to Decatur, Illinois, to pursue what he describes as “a decent night club gig and some goddamn broad I was trying to bang.”  That’s Mac’s life from birth to stardom in a nutshell.

“I was playing at this piano bar – Katz, maybe.  Not sure if it was Katz then.  This was November ’85, maybe October. I been back lots of times since -” *wry smile* – “So I was going through the old standards, Sinatra, Torme, Andy Williams, really killing it, really tearing the place up.  People would come out to see this creepy moon dude belt out a few, and stay cause they were so goddamn impressed, you know what I mean?  So someone sent my demo tape up to Oak Brook, the suits loved it, and next thing you know – Bang!  I’m coming into your living room, getting your fat ass kids to lust after late night French fries.  Goldmine, bitches.” 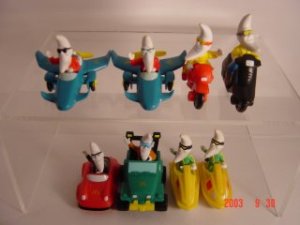 Fast forward three years.  The Mac Tonight campaign ran its course.  McDonald’s late night menu was cemented in the popular consciousness, so they let Mac go.  “How do you like that shit?” he asks.  “I’m the dog and pony show, shilling their fucking yuck for three years, and they toss me aside like a half eaten McDLT.  Ain’t that about a bitch?  They keep that piece of shit Hamburglar on the payroll, but what do I get?  ‘Oh, thanks sonny, we sure appreciate all the goddamn units you moved for us, now can you beat it the hell out of here?  The clown needs his face time.’  Always that asshole clown.”

“Mac who?” Ronald chuckled when phoned to comment on this story, and hung up.

“So yeah,” Mac continues, “life got all sorts of shitty after that.”

He tried to tour with his new-found fame, abandoning his birth name and legally securing the right to call himself by the McDonald’s trademark – “It’s the least those dicks could do for me” – but the tour faltered almost from the start.  Mac Tonight Comes Alive played its first shows to less than half full audiences at the Chicago Stadium, followed by a grueling 25 city trek which nearly bankrupted all involved by the time the gates were shuttered for good at the Hollywood Bowl.

“Best show anyone’s ever seen,” Mac defends, “even if only a few hundred were there.”  Two weeks later, Mac was busted for possession. “Framed!  Are you kidding?  You think me – with like the second most recognizable head in the world – Grimace – is gonna buy and carry crack cocaine?  That shit’s fucking insane.  It was a frame up, no question in my mind.  Some chump asshole trying to make a name for himself.  So yeah, I did five years in Joliet – kept getting into brawls, everyone wanted a piece of the Moon Daddy.  I don’t lay down for no one!” 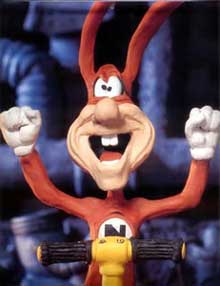 It was a hard road after that.  More touring with little success, accepting small gigs wherever he could, open mic nights, karaoke bars, talent shows, subway performances.  “I tried doing a touring comedy/music show with the Noid for a while, but that dude is a goddamn freak.  The unholy shit that happened on that tour bus I can never forget, no matter how much I want to.  Fuck the Noid, seriously.”  Finally, with American options shot, Mac hopped a freighter bound for Indonesia, dabbled in the occult and homosexuality during the long voyage – “they thought I was their God on board for a while, so I got a lot of ass” – and then wound through Southeast Asia and the Subcontinent.

“So why am I in Bangalore?  Did I just fall in love with the place? Are you kidding?  I’m huge in Bangalore.  These folks can’t get enough of the singing celestial object. I can’t walk down the street.  I’ve even had some discussions with Oak Brook again, they’re saying I could end up in commercials in their Asian markets.  Everyone loves a comeback story.  It’s the American way.  And hopefully, soon, the Indian way as well.”

Mac then went back for the 10 o’clock show – his seventh of the day – perhaps a step slower, perhaps a few beats down from his heyday performances, slowed by delusion and bitterness accrued over decades.  He’s a stranger to the world, living as an expatriate, unable to hide for a second due to his awesome deformity (“Or is it?” he’s quick to ask).  But he still hammers away at the keys, still flashes that huge grin, still hawks a late night menu that needs no further promotion.  He’s a man lost in time, lost in space, confused, alone, ravaged by self-abuse, and desperate for redemption.  All his thoughts are bent on a return to the limelight, a renaissance that may never come.