Today! Because I gave up yesterday/But they still want more –

My favorite modern-ish, live-action, non-puppet led musical, Bugsy Malone is nonetheless anything but conventional, what with its world of 1920s child gangsters belting out grown-up songs with adult dubbed voices. If you’ve never seen it, it is a pretty jarring choice, but again, these aren’t really children’s songs, so it works more than it doesn’t. The film, however, is very definitely a kid’s movie, and so may not seem like an obvious first time pickup for the adults out there. But if you somehow avoided Bugsy Malone all these years, you owe it to yourself to see this glorious bit of filmmaking.

First off, and most notably, you have Jodie Foster – the greatest child actor of them all – as the third lead. This is her second list film from 1976, neither of which are Taxi Driver, and while she’s easily the most talented person in the film, it’s hard for me to immediately hand over that MVP. Chachi/Bob Loblaw Scott Baio gives her a solid run as the title good guy mobster, everyone’s pal Bugsy, while the competing mob bosses – John Cassisi’s Fat Sam and Martin Lev’s Dandy Dan – are equally terrific in their opposing comic styles. Hell, actor/director Dexter Fletcher (who completed Bohemian Rhapsody once Singer got canned, and then helmed Rocketman, which hasn’t been released as of this writing, so I don’t know if that’s a positive or not) has a terrific, brief role as Baby Face. The child actor cast is first rate. Even the much maligned Florence Garland (who was thrust into the lead as Blousey when the previous actress grew too tall) gives a pretty game effort, even if she’s a bit unsuited to play opposite Baio so much. 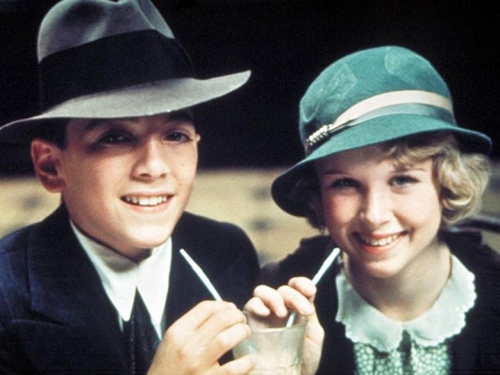 Oh my God, how cute are these little criminal shits?