The Set of 400: #71 – My Favorite Misattributed Charlemagne

Today! Because we are on the verge of completing a quest that began almost two thousand years ago –

Indiana Jones and the Last Crusade (1989)

In putting this list together in the summer of 2018, I needed to rewatch 60 or 70 films, mainly as it had been a while since I’d seen, say, Switch and The Dream Team. I remembered liking them, but how much did I still like them? And some movies straight missed out due to this rewatching – Lost Horizon, The Secret of NIMH, and Falling Down are not what 12-year-old Joe would’ve had me believe! One thing I didn’t think I would need to rewatch was Last Crusade, as I’d seen this movie a billion times, even if it had been a few years. But I just happened to catch it on TV around this time, and was surprised to find that (as of fall 2017) one of my top 20 films struck me quite differently than expected.

Now, I’d not seen Temple of Doom in a while either, and ended up watching them back-to-back. That may have hurt Last Crusade? Not because Temple of Doom is way better – I genuinely believe it is not – but that Last Crusade feels shockingly tired when viewed immediately after the Raiders’ prequel. It’s still largely what you remember – fun action pieces and terrifically funny scenes between Indy and his dad – but there’s also a lot of lame dialogue and pointless interluding that feel unnecessarily thrown in. I liked the River Phoenix flashback opener, but it feels gimmicky. And Indy meets Hitler?! Come on, have you always been okay with that choice? 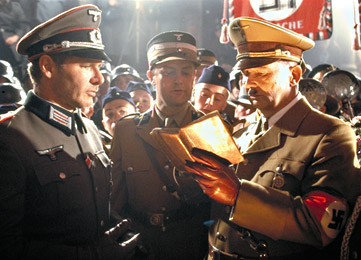 “Nuking the Fridge” became a phrase, but it clearly should’ve been “Getting Hitler’s Autograph”

END_OF_DOCUMENT_TOKEN_TO_BE_REPLACED

Today! Because Ike said, “Hey look, give us your technology, we’ll give you all the cow lips you want” –

All the cast in the world came together for this relatively light heist flick in the early ’90s, with pretty fun results. It’s not a movie you hear bandied about much these days – but judging by its gross, it was fairly popular in the fall of ’92. Redford and Kingsley play friends-turned-rivals battling over this MacGuffin that will decode and hack into everything on the remedial early ’90s internet. Redford’s team of good guys includes very funny turns by Aykroyd, Phoenix, and particuarly Strathairn as the blind sound expert Whistler. To my knowledge, this is also the only big screen pairing of film legends Redford and Poitier, so that’s cool! Is it a bit dated, given that the high-tech wizardry on display in this movie looks like a cheap Nintendo game? Sure. But even at the time this seemed more an excuse to gather up a ton of great actors and go on a good, old fashioned caper than to try to wow the audience with gadgets. The movie doesn’t quite match up to the heavy hitters involved, but it is definitely enhanced by their collective presence. END_OF_DOCUMENT_TOKEN_TO_BE_REPLACED