Today! He may have advanced delusionary schizophrenia with involuntary narcissistic rage, but he’s a very gentle person – 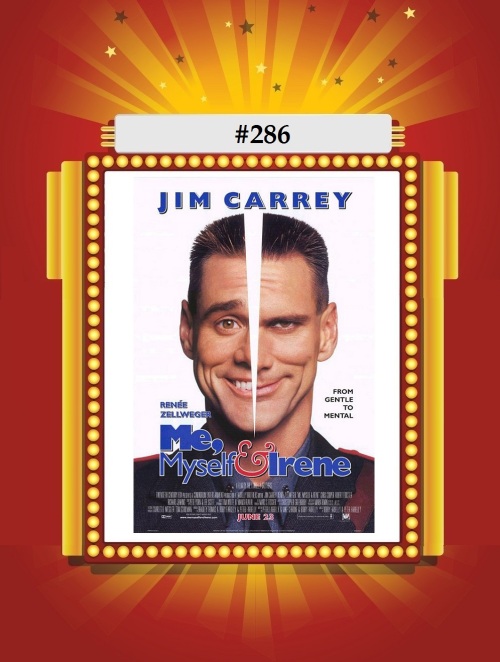 Directed by the Farrelly Brothers

The second and last of the all-out comedies of Jim Carrey to appear on this list, Me, Myself, and Irene came along mid-college for me, and solidly connected, with its brand of hyper-aggressive vulgarity and over-the-top absurdism. Carrey is never better than in his rampant split personality portrayal of good-guy cop Charlie Baileygates and his psychotic alter ego Hank. And yes, Hank is a lot, but the movie manages to parcel him out well, so as not to overwhelm the audience with that intensity – it would almost certainly have led to weariness, and jokes not really landing.

But my favorite part of this movie has always been his sons – at the beginning of the movie, we see his wife run off with a black genius dwarf limo driver, Shonte (played by the always great Tony Cox), but not before leaving Charlie with the triplets he fully convinces himself are his, biologically: Jamal, Lee Harvey, and Shonte Jr. And as grown men, his kids have the best lines in the movie – with genius inherited from their father, they spout “Enrico Fermi’d roll over in his motherfucking grave if he heard that stupid shit,” “I can’t figure out the atomic mass of this motherfuckin’ deuteron!” and “You think polypeptide’s a motherfuckin’ toothpaste!” Anthony Anderson, Jamal Mixon, and Mongo Brownlee – my MVPs of this movie.