Today! Because you’re fighting for this woman’s honor, which is probably more than she ever did – 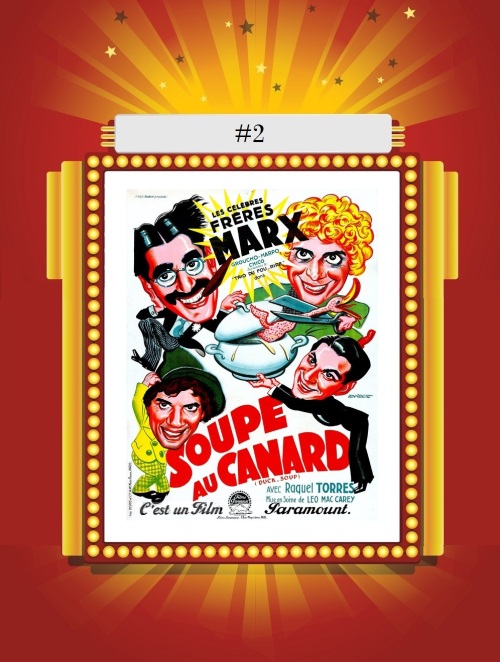 There have only been a handful of movies I’ve ever serious proclaimed were my favorite of all-time, at any given point in my life. Sure, for purely comic purposes, I will often lean over to the wife in a movie theater and declare that whatever nonsense we’re watching is my favorite movie ever, usually after Captain America punches someone through a building, but the actual list is much smaller. Prior to ’89, I don’t recall informing of my parents over the morning’s Cheerios that, like, I Am Curious Yellow was now my favorite film – I just wasn’t ranking stuff back then, too busy mastering all the walking and talking that life requires. But, summer ’89, Batman got to the top of the list first, followed without break (I think) by Hook in ’91, Batman Returns in ’92, and then came the cinematic awakening when I put away childish things (shoutout, First Letter of Paul to the Corinthians!) and Unforgiven scaled the film mountain. Given this rapid adjustment of preferences, you’d think that the title would’ve changed hands many times in the subsequent years, but basically since then, only one of two movies has been #1 in my personal catalog. Tomorrow’s film most often has been named my favorite, but in any given month, Duck Soup could supplant it, so interchangeable is my love for these movies.

END_OF_DOCUMENT_TOKEN_TO_BE_REPLACED

Today! Because if you take cranberries and stew them like applesauce, they taste much more like prunes than rhubarb does –

As mentioned previously, my roundabout path to discovering the Marx Brothers began with Go West, a lesser flick that nonetheless managed to find a place on this list. But I believe Animal Crackers is probably the gateway Marx effort for most people, after a certain age. It has the most famous songs from all their films – the later You Bet Your Life theme “Hooray For Captain Spaulding” as well as “Hello, I Must Be Going” – and is the role Groucho would forever be identified with, even if there aren’t a ton of shades between any of the brothers’ characters in their movies. It was the last of their stage efforts to be translated to the screen, while also working out a few of the technical kinks of their first film, The Cocoanuts, from the year before.

Animal Crackers had various rights issues for a number of years – due to the song copyrights reverting to the authors after a period of time, mistakenly not renewed by the studio – and so it remained out of circulation for decades, until the massive Marx revival of the 1970’s. Thus, I’d guess, if you’re a fan and over 60, you may not have seen this one for a while – but come on, you’ve had plenty of time to catch up to its greatness. END_OF_DOCUMENT_TOKEN_TO_BE_REPLACED

Today! Because you should have come to the first party. We didn’t get home until around four in the morning. I was blind for three days – 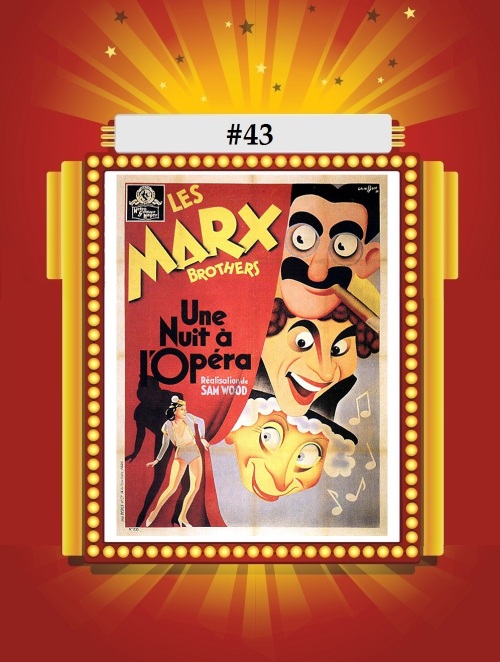 So if you want to get really technical, the Marx Brothers have three distinct periods of their film career – The terrific Four Marx Brothers years (’29 through ’33) and the mediocre Three Marx Brothers years (’38 to ’49), bookending the shortest but most successful period, the two film set of great Three Marx Brothers pictures under Irving Thalberg, A Night at the Opera and A Day at the Races. They are no longer the zany, joke-heavy antics of the early films, plus the romantic lead duties have fallen to non-relative Allan Jones, in lieu of Zeppo. There are more songs, slightly more runtime, bigger budgets thus larger set pieces, and far bigger box office receipts at Thalberg’s MGM than their Paramount films before or RKO/UA/non-Thalberg MGM ones later.

A Night in Casablanca was a disappointment on all fronts

END_OF_DOCUMENT_TOKEN_TO_BE_REPLACED

Today! Because I thought my razor was dull until I heard his speech. And that reminds me of a story that’s so dirty I’m ashamed to think of it myself –

Admit it – you’ve missed the brothers Marx on this list! Nearly a hundred films have sailed by with nary a reference to the quiet one’s virtuoso harp skills or a discussion about how increasingly bitter the youngest must’ve gotten at his lack of jokes. Well don’t worry – even though we’re rapidly approaching the end, there are still a bunch of madcap Marx vehicles to come.

If differentiating between their early films is tough for you (which it shouldn’t be, come on), Horse Feathers is the one at the college. Groucho’s Professor Quincy Wagstaff is the newly appointed president of Huxley College, currently attended by his son, portrayed by his eleven years younger brother Zeppo. Chico and Harpo play their typical seedy types, brought in to steal football signals for a rival school, but obviously are out for themselves first and foremost, and so ending up switching sides, amidst much frivolity and spit balling.

END_OF_DOCUMENT_TOKEN_TO_BE_REPLACED

Today! Because I worked myself up from nothing to a state of extreme poverty –

The Marx Brothers third feature film, and the first not based on one of their Broadway shows, Monkey Business attempts to expand their very stagey banter into a real motion picture, with largely good results. There are clearly some growing pains in this move – while the scope of the movie broadens out a bit, the team’s bread and butter remains the same, with extended comic dialogues and paired off routines between Groucho & Chico, Chico & Harpo, and Groucho & Zeppo. It would be another year before they truly figured out how to break the routine for good, in Horse Feathers.

END_OF_DOCUMENT_TOKEN_TO_BE_REPLACED

Today! Because I really am a horse doctor, but marry me, and I’ll never look at another horse –

The last really good Marx Brothers movie (and even that is up for some debate), A Day at the Races functions as a solid last gasp for the team, even though they couldn’t have known it when production began. Like on A Night at the Opera two years earlier, they had the benefit of road testing some of the material, to get the jokes down solid and the timing together to hold for laughs. They had the enthusiasm and support of MGM boss Irving Thalberg, who threw them the money and resources to make this work, and got the film launched before cameras in the fall of ’36.

For two years, they were quite the team

END_OF_DOCUMENT_TOKEN_TO_BE_REPLACED

Today! Because I’ve got a waiting list of fifty people at that cemetery just dying to get in. But I like you and I’m gonna shove you in ahead of all of them –

The second oldest movie on this list, The Cocoanuts comes off as the worst, physically, due to the limitations of 1929 filmmaking. The advent of sound two years before afforded the Marx Brothers the chance to jump into motion pictures – too much of their comedy is wordplay to have functioned well in silents (And yet, their early lost silent short Humor Risk continues to fascinate with possibilities – if you’re harboring a copy, speak up!). However, the microphones in ’29 weren’t the greatest, so the movie does have an overall rickety feel that can be a bit distracting. Sopping wet papers are visible throughout the film, to dampen the crinkling being picked up by their super sensitive equipment, but that doesn’t help the other violent static and unintentional footstepping picked up. Also, technically, there is no known complete version of the film – what exists is a somewhat cobbled together assemblage of footage that runs fully seven minutes shorter than the purported original release.

There is still plenty of classic Marx Brothering going on

END_OF_DOCUMENT_TOKEN_TO_BE_REPLACED

Today! Because I was going to thrash them within an inch of their lives, but I didn’t have a tape measure – 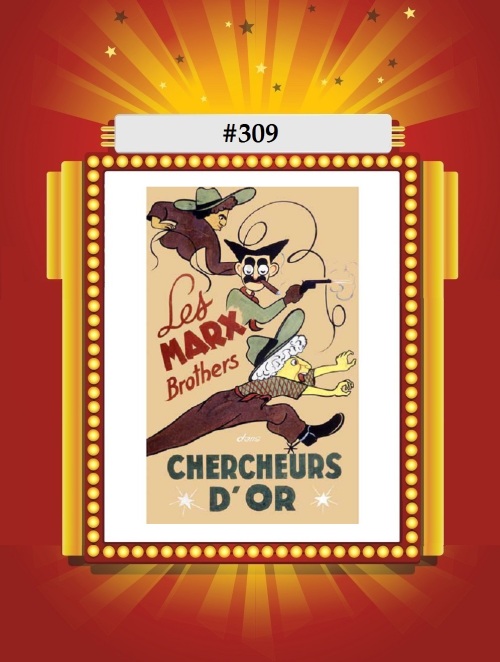 And then there are movies that, on the surface, are little more than trifles, and yet they have the ability to change your life forever. Movies so monumental in opening you up to new possibilities and avenues that the course of your interests is irrevocably altered from that point on. These come along very rarely – you can’t have your world shook to its foundation every week – but in early high school, on accident, I set the VCR to record something, and woke up the next day to find the first hour of Go West, and nothing has ever really been the same for me.

Sure, I was already way into comedies at this point. Mostly television, but also a lot of recent popular film that everyone would see in middle school. And then I discovered the Marx Brothers, and all of a sudden the scope of film comedy opened way, way up. There actually were funny movies before Airplane! and Mel Brooks! Go West was made in 1940, and it’s like the eighth best Marx Brothers movie! My mind was blown, and I became a die hard Marx fan basically that day. END_OF_DOCUMENT_TOKEN_TO_BE_REPLACED 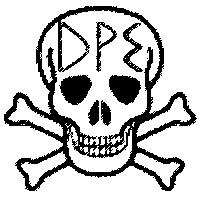 Since its inception the Death Pool has been one of the world’s most popular sporting events.  Celebrity deaths are as much a staple of sporting life in history as the discus, the marathon, and the New Orleans Hornets. They have the ability to bring people together in sorrow, but also in thrilling elation when your team grabs the points for a recent corpse and contends for the DPE championship trophy, the Tin Mickey cup.  There are have been controversies (Team Baguette owner Charles Guiteau assassinating President Garfield in 1881 comes to mind), but by and large the DPE has been riveting, enthralling, wholesome entertainment.

Some of the most memorable moments in Pool history are reminisced over and argued about from generation to generation, at Christmas dinner, over a pint at the pub, in the bleachers at team stadiums around the globe, and everywhere in between.  Let’s look at some of those unforgettable moments and match ups now, shall we? END_OF_DOCUMENT_TOKEN_TO_BE_REPLACED