Today! Because all my life I’ve been in love with its color, its brilliance, its divine heaviness –

The greatest of the early Bond pictures (get out of here, On Her Majesty’s Secret Service fans!) featuring the most iconic death (poor Jill Masterson!), the most iconic henchman (film MVP Harold Sakata’s Oddjob!), and most sexist character name in the history of literature, cinema, and all yet to be created mediums. Like, if there was a porn version of Goldfinger (and there probably is, right?), they couldn’t come up with something worse than Pussy Galore (crack work, Ian Fleming). As terrific as From Russia With Love was, this would quickly become the 007 adventure against which all others would be judged, and all others would be deemed lacking for a very long time, if this has ever indeed stopped. 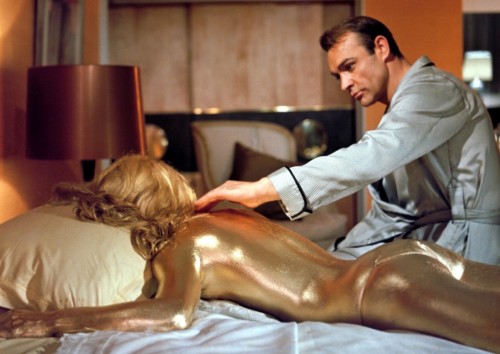 But, none have featured a death quite like Jill’s

END_OF_DOCUMENT_TOKEN_TO_BE_REPLACED

Today! Because compared to Clouseau, this doomsday machine is just a water pistol –

The Pink Panther film series went through a variety of phases, from the genteel early ’60s comedies A Shot in the Dark and The Pink Panther to the one-off Alan Arkin film Inspector Clouseau to the zany return to Sellers in the ’70s to the bizarro pseudo-sequels and spin-offs of the ’80s and on and on. There’s a few cartoon shows and Steve Martin in the mix as well. But for my money, the only films that are really any good are the fourth, fifth, and sixth movies – after Edwards and Sellers were away from the franchise for over a decade.

And really, had he not died, Sellers seemed intent on playing Clouseau for many years to come. The unrealized Romance of the Pink Panther would’ve marked his sixth time in the role, and these films – while still funny – were getting a touch interchangeable. That’s why The Pink Panther Strikes Again always stuck out for me. As solid as Return of the Pink Panther and Revenge of the Pink Panther were around it, Strikes Again had the benefit of not being the first film back from the long hiatus, plus it had the genius decision of finally driving Captain Dreyfus completely insane. This is set up by the end of Return, where Dreyfus (Clouseau’s boss) attempts to kill him, and is institutionalized. Here, Dreyfus (played with manic zeal by the great Herbert Lom) morphs into a lunatic supervillain, intent on holding the world hostage, and it’s naturally up to Clouseau to stop him.