Today! Because everyone who drinks is not a poet. Maybe some of us drink because we’re not poets –

I’m not sure how expressly I’ve stated this before, but clearly I’ve got a thing for drinking comedies. I know I’ve referenced my long lost Best Drinking Films list from a MySpace blog – a list I’m sure I have somewhere but still can’t locate – but that was created largely because of my affinity for buffoonish alcoholic adventures on the big screen. This list has featured a bunch of them – mostly teen comedies like #231 American Pie, #348 Road Trip, and #67 Can’t Hardly Wait, but also your #147 Quiet Man, that one scene in E.T. (that’s probably where I mentioned this list before, right?), and now the greatest comic drunk character of all time, Dudley Moore’s terrific soused millionaire layabout Arthur Bach.

As I think I mentioned two days ago, growing up I saw a fair amount of the film Wholly Moses! with Laraine Newman, as I was inclined toward anything featuring that first Saturday Night Live cast, I guess. I don’t distinctly remember this movie – probably should’ve rewatched for this list, maybe Wholly Moses! could’ve snuck in the backend! – but it’s almost certainly where I gained any familiarity with Dudley Moore. He and Peter Cook did host a season one SNL episode, but I don’t distinctly recall it from back when I was inhaling the Nick at Nite half hour highlight edits. His American fame didn’t last all that long, and most of it was before my time, but Arthur was definitely the peak, in a stretch of movies including 10 and Foul Play, which cemented him as a comedy star domestically. While he continued working fairly steadily, the ’80s were clearly his heyday, coming to a smashing end when he finally revisited his most popular character in one of the great disasters of the sequel game, Arthur 2: On the Rocks in 1988.

But the original! Arthur doesn’t so much glorify boozing as mine it for all the comedy it’s worth, short of making Bach a grotesque spectacle. While he’s this super rich, aging playboy, Arthur is inherently a pretty lonely person – which the film masks through the great slurring, stumbling comic sequences. But there’s a reason John Gielgud’s work as Arthur’s butler Hobson won him an Oscar – underneath all the gleeful riches and terrific one-liners, the heart of the film is Arthur’s relationship with this one constant in his life. There’s a somewhat hokey plot wherein he needs to marry another millionaire heiress (millionairess?) to retain his fortune, and instead winds up enamored by Liza Minnelli’s streetwise, rough and tumble Linda – wasn’t this the basic plot of every rich-man-heart-of-gold-comeuppance-bound comedy of the era? It works fine here, Liza makes a great comedic partner for Dudley, and both pair well with Gielgud’s deadpan, acerbic style. 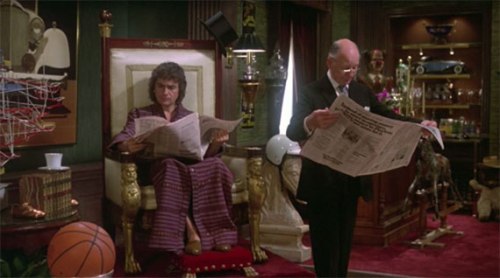 Not pictured: their terrific interplay

I don’t know how well this movie is aging – would they make the romantic hero a fall down drunk nowadays? Is this film far too distinctively ’80s to stay in a modern rotation, or find a new audience? It was a huge hit in its day – the fourth highest grossing movie of 1981 – and won Oscars for Gielgud and Christopher Cross’s famed “Arthur’s Theme (Best That You Can Do)”, as well as picking up nominations for Screenplay and Best Actor for Moore. And it won a slew of Golden Globes – Comedy/Musical Film, Actor, Supporting Actor, Screenplay – but how often is Arthur bandied about your hacky sack circle these days? The remake with Russell Brand from a few years back certainly didn’t help things, I imagine. The original was named the 53rd funniest movie on the AFI list of comedies, but even that was twenty years ago now.

I’d guess this is probably holding up better overseas than here, given the complete legend status Moore enjoys in England. I only became familiar with his earlier work in the last bunch of years, discovering his Beyond the Fringe recordings, and his many other projects partnering with Cook, including Bedazzled, Not Only…But Also, Derek and Clive, The Hound of the Baskervilles, and of course #76 The Bed Sitting Room. Honestly, it has been tough trying to track down much of his earlier stuff, so much of it being British television either not available here or on Region 1 DVD. Anyone know of a reliable region-free player emporium?

No one moves beyond the Threes today, with Gielgud (#374 Murder on the Orient Express and #323 The Elephant Man) and Lawrence Tierney (#252 Reservoir Dogs and #210 The Naked Gun) leading the way! Spotlight!

Coming Monday! It is one thing to question the official story, and another thing entirely to make wild accusations, or insinuate that I’m a superhero –