Today! Because I’m going to break you, Holmes. I’m going to bring off right under your nose the most incredible crime of the century, and you’ll never suspect it until it’s too late –

The Adventures of Sherlock Holmes (1939)

The best film in the Rathbone/Bruce Sherlock Holmes series, the second one chronologically, and the fourth to the make this list, The Adventures of Sherlock Holmes was released six months after The Hound of the Baskervilles and still enjoyed all the support and budget Twentieth Century Fox was willing to offer. Thus, it’s a beautifully designed Victorian yarn pitting Holmes and Watson opposite George Zucco’s Moriarty, the most dynamic in the film series (he would appear twice more in the later Universal films, played by Lionel Atwill and Henry Daniell). The ingeniously simple plot – relying more on Moriarty’s understanding of the Holmes’ psyche than twisting complexity – culminates with an all-time classic showdown between the two at the Tower of London. 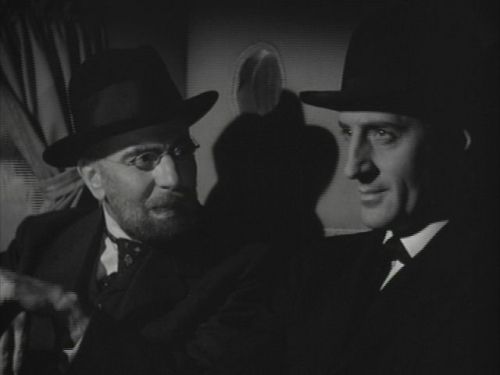 Much earlier in the film they split a cab, which was an economical way to see London in the 1800s, and still is today

Or at least it would be an all-time classic, if these films were more popular. Oh sure, among Holmes fans these things are the gold standard – no matter how you feel about Nigel Bruce’s jolly but somewhat thick take on Watson, few will argue against Rathbone as the definitive Sherlock (at least on the big screen), and yet, I think these movies are largely being forgotten as time wears on. From my rudimentary study of IMDB ratings, the most widely seen film in this series is #333 The Hound of the Baskervilles, not surprisingly, as it is the most famous Holmes story. Adventures is technically based on the William Gillette play from 1899, which itself is based on a bunch of stories including “A Scandal in Bohemia” and A Study in Scarlet, but is mostly an original story, and doesn’t have the B-grade production values of the later movies. It was three years – mostly caught up in legal wrangling – before Universal had Rathbone and Bruce back in theaters in these roles (which they had continued to perform on the radio since ’39).

As I’ve said a bunch of times, I’m not a huge Holmes fan, as far as the Conan Doyle stories or the various TV shows are concerned. Sure, we’ve had a bunch of versions of this character pop up on this list – from comedies to modern action films – but I think that says more about the enduring appeal of the detective than some mania regarding the creation. This all largely comes back to my dad, who was a huge fan of the series, watching the VHS tapes from Key Video endlessly while I was growing up.

This was their universal design!

I think this also worked to shoehorn an interest in radio dramas into young Joe, as I don’t know how or when I might’ve gotten around to it otherwise. Rosco had somehow tracked down a catalog of old time radio classics, and we snapped up a bunch of Sherlock Holmeses, but also movie adaptations, horror anthologies (I’m pretty sure I mentioned Peter Lorre’s excellent Mystery in the Air before), Orson Welles’ Mercury Theater on the Air, and some sitcoms like Fibber McGee and Molly and Our Miss Brooks. You can easily find these now, what with countless podcasts dedicated to the medium plus YouTube and other audio streaming websites, but in the early-to-mid ’90s there weren’t other options. I’d recommend giving a listen if you never have – they’re pretty fun, the theater of the mind and all that, and the Foley artistry is often amazing. 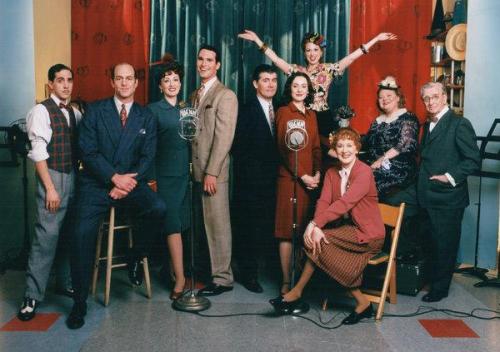 I don’t know how well you recall the late ’90s AMC sitcom Remember WENN, but it landed right in my sweet spot recalling this old timey entertainment

There are plenty of repeating actors, given the multi-use casting of the Holmes series, but we also have the odd occasion of Alan Marshal and George Zucco both joining the Three-Timers for the same three movies, and this being the only Sherlock vehicle (#303 After the Thin Man and #108 Hunchback of Notre Dame the others). Arthur Hohl was also in Hunchback, but his third is my second favorite film of the series, #176 The Scarlet Claw. But leading the way today are John Watson and Sherlock himself, with Bruce’s four appearances (with #291 The Voice of Terror) and Rathbone’s five (adding in #141 The Adventures of Ichabod and Mr. Toad with this series). Spotlight!

Some detectives! The killer is right there!

Coming tomorrow! Old man Peabody owned all of this. He had this crazy idea about breeding pine trees –