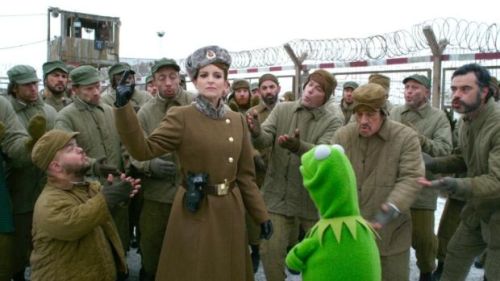 But it’s not as fun as its obvious inspiration, 1981’s quest to thwart the theft of the fabulous Baseball Diamond from the Mallory Gallery. This one has a bunch of personal connections for me – besides again loving the soundtrack from “Hey It’s a Movie!” to “Happiness Hotel” – but I’ll just quick share a few: whenever we’re watching a movie or TV show and a character rambles on with a ton of information the audience needs to know but makes no sense for the other characters in the scene, I will invariably quote Diana Rigg’s Lady Holiday: “It’s plot exposition, it has to go somewhere.”

In (I want to say) 2003 I co-wrote a play produced in the bustling theater metropolis of Jessup, Pennsylvania that was basically a compilation of ten-minuters into a loosely strung together evening of yuks. Dane and I (shoutout Dane Bower!) couldn’t hit upon a title for this Frankenstein of a show, set primarily in a bar as the scenes played out behind, until I remembered Piggy’s throwaway line in Muppet Caper. She’s broken into a posh London residence, pretending it’s her own before Kermit picks her up on their date, and is confronted by the owner, played by John Cleese. He, being a polite Brit, asks if there’s anything he can do for them, instead of hurling them into the street, wherein some information is exchanged and Piggy dismisses him with “Thank you, Jeeves. No time for cocktails.” Thus, No Time For Cocktails took the Jessup theater world by storm for a lone weekend seventeen years ago, and no one is still talking about it to this day. 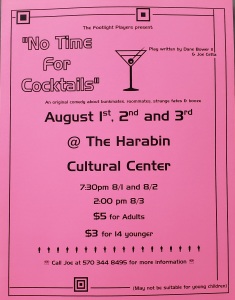 I’ve got a back-of-the-house recorded VHS of this around here somewhere, if you want to come over and watch it. It’s fine.

Just barely missing the top 50, Muppet Caper is the only Jim Henson directed film to make the list – in fairness, his only other movies were Labyrinth and Dark Crystal, and as much as I adored them as a kid, those movies are not holding up for me these days. This is the fifth Muppet film on the list, following #312 Treasure Island, #188 Christmas Carol, #111 Takes Manhattan, and #279 From Space, thus the huge advancing group above, but it’s Frank Oz leading the way, coupling his Henson puppeteering with that done for Lucas and reaching the Nine-Timers, only the second actor to reach this level, alongside Phantom Menace co-star Samuel L. 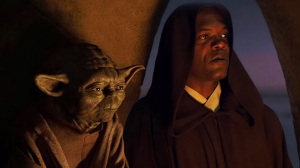 Closest thing I could find!

Coming tomorrow! Actually, there is no Hell. Although I hear Los Angeles is getting pretty close –