The Set of 400: #58 – My Favorite Bicycle Powered Sword Fighting Dummy

Today! Because unless I’m very much mistaken, chaderd is the Egyptian word meaning “to eat fat”! Now we’re getting somewhere!

This movie was such a bedrock staple of childhood that I was amazed to learn of its relative obscurity as I got older. I mean, it’s not completely unknown, but it certainly isn’t widely discussed or regarded. Information about its general success upon initial release is a little tough to come by – I’ve seen it ranging anywhere from the 24th to 48th highest grossing movie of 1975, and it may or may not have been the #1 film the weekend before Christmas – but it certainly hasn’t had the staying power of the ’70s Mel Brooks films it is clearly patterned after.

Which is a shame, because while it doesn’t function overly well as a Sherlock Holmes parody – à la the more direct take off of #220 Without a Clue, say – it is a pretty solid Sherlock-esque comedy. Lifting an alias Holmes employed in the first Conan Doyle story after the character’s supposed death (“The Adventure of the Empty House”), Wilder plays Sherlock’s bitter younger brother Sigerson, not – as you may have guessed sight unseen – his famously smarter elder brother Mycroft. Sherlock (played by frequent Sherlock, Douglas Wilmer) directs a vitally important case to his brother through Feldman’s Scotland Yard Sergeant Orville Sacker (named very similar to Doyle’s early draft Dr. Watson – Ormond Sacker). Before long they are facing off with a comically volcanic Moriarty (the terrific Leo McKern), a habitually lying chanteuse (you can never go wrong giving Madeline Kahn musical numbers), and a horse-and-carriage chase/fight through the streets of London unlike any ever made.

Thanks for coming through, heavily watermarked stock photo!

Fans of the Brooks’ parodies of the day would certainly enjoy Smarter Brother, especially considering the reunion of the main Young Frankenstein/Blazing Saddles cast of Wilder, Kahn, DeLuise, and Feldman. The songs are goofily entertaining, the plot is just complicated enough to fit the supposed brilliance of the characters, and the terrific little details should please hardcore Sherlock fans as well. Now, sure, maybe the characters don’t jump off the screen – the roles seem more crafted to the actors playing them than anything else – but this collection of talent really sells the premise well. And while he has appeared in a surprisingly large number of films on this list, my absolute favorite Dom DeLuise role is his turn as opera singer/villain Eduardo Gambetti. His scene discussing the stolen document with an increasingly enraged Moriarty is tremendous. 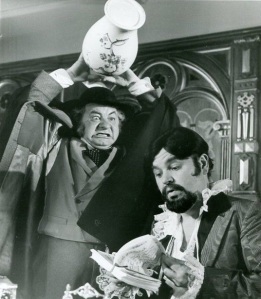 Two reside in the spare bedroom, on either side of this Malcolm McDowell signed Clockwork Orange

Some years ago we attended a random sci-fi film festival in Chicago, where they were selling old movie theater lobby cards between films, which were largely picked-over junk, but I did snag a few Smarter Brother ones that still hang in my house to this day, some 11+ years later. I think one of the main reasons Sarah was so insistent on getting a larger apartment in 2018 (only three months before I started writing this thing) was so that all the movie posters I hang up could get out of the living room, thus my framed Gene Wilder period costume pictures aren’t part of our grown-up decor.

We’ve almost completed our lengthy run with Conan Doyle’s master detective, through all his various permutations on this list, with only one more Holmes still to come next month. But that’s it for the comedies, folks! Michael Caine, George C. Scott, Robert Downey Jr. (sort of), and Gene Wilder! Look, I didn’t know I was this into Sherlock Holmes either – again, I’m not much for the original stories or any of the TV shows (okay, maybe Jeremy Brett on occasion), it’s just film versions, and half of those are wacky take-offs. This character occupies fully 2% of this list! It’s an astounding amount for a single creation. Maybe when we’re done I’ll try to calculate if there is another character that approaches this height.

DeLuise becomes a rare Seven-Timer with his awesome Gambetti here today, following work in #198 Spaceballs, #395 Robin Hood: Men in Tights, and #282 Johnny Dangerously, but it’s his #273 Cheap Detective/#70 Blazing Saddles/#135 History of the World co-star getting the spotlight today – finally our first female in the Seven club, Madeline Kahn! Also appearing in #214 Nixon, #154 Clue, and #157 High Anxiety, she makes 14 members of the prestigious group, and time is running out! Will she top the list of actresses come September? Exciting finish on the way!

But is the “Kangaroo Hop” song as famous as it should be?

Coming tomorrow! Make it quick because my horse is getting tired –

One response to “The Set of 400: #58 – My Favorite Bicycle Powered Sword Fighting Dummy”