Today! Because underneath all that hair you’re still a dork, Scott –

Ladies and gentlemen, you could be doing anything in the world right now, but instead you chose to be here, at Knowingly Undersold, so one of the great treasures of the film universe could be fully revealed. There are a few movies on this list that justify the entire enterprise for me – some are random, overlooked gems back in the 300s, and a few are still to come, but none have been as written about more all-time by yours truly than Teen Wolf.

Just to quickly recap virtually everything I’ve ever said about this movie, on this blog, in various old reviews, and to strangers on the street – Teen Wolf a hugely underrated, surrealist masterpiece of a town’s collective shrug at the fact that there is a living, breathing horror movie monster attending the local high school and taking girls to bowling alleys on dates. It’s an allegory for accepting people for who they are, deifying those with marginally better athletic abilities, and puberty, in the guise of an ’80s teen comedy wherein the token chubby character (named, creatively, Chubs) is instructed to eat a bowl of Jell-O out of a girl’s tank top. The mania of the teenage wolf infects the community, with zero blowback from the authorities or the government at large, I guess because they are winning basketball games, with the exception of the almost entirely silent character Lewis, played by Matt Adler, who manages to be the lone “voice” of opposition, The One Who Walks Away from Omelas, if you will. There is also some insinuation that this werewolf infiltration has been going on for some time, and basically no one talks about it or much cares, and what does that say about this city? Does that make them more accepting of people’s differences? Or are they ashamed? It’s a fascinating example of differing cultures and societal norms in America.

What does Scott’s method of beer drinking say about us as a people?

But even though I could talk about the film itself to egregious length, to the point of incorporating the nonsensical sequel and plotting a course for a Teen Wolf-iverse that Hollywood would be foolish to ignore (Get at me, studio heads!), I instead want to examine why I enjoy this shlocktastrophe as much as I do. Like many films of the era making this list, I watched Teen Wolf dozens of times as a kid. I saw it years before watching Back to the Future for the first time, and so more directly associated Michael J. Fox with Scott Howard than any other character (I didn’t watch a ton of Family Ties, either). The flashy, supernatural aspect to the plot is naturally intriguing, even just in a “How the hell are they going to sustain a movie with this?” manner, plus it has cool teenagers playing basketball and surfing the roof of their vans around town. That’s all kid appealing, right?

But I think the wholly riveting hinge of this story is their taking an otherworldly, unnatural element, thrusting it into an otherwise normal plot in a thoroughly humdrum community, and seeing how it meshes. The natural reaction from the city should’ve been the same as any similar alien or horror flick – the town loses their collective shit and starts marching with pitchforks. The Day the Earth Stood Still/Beauty and the Beast/Frankenstein bedlum erupts and the werewolf is pilloried in the town square. This movie transcends others of its ilk by simply not doing this – setting up Scott as more a god than a freak, whose only opposition is mild from the film’s douchy-but-justified villains – basketball opponent Mick and school vice principal Thorne. Sure, some of his friends are a little weirded out – again, Lewis is the most sensible, centered figure in the story, despite having like four lines of dialogue – but quickly come around out of personal greed (Stiles, fun but a bit predatory) or unrequited love (the greatest character name in the history of movies, Susan Ursitti’s Boof). 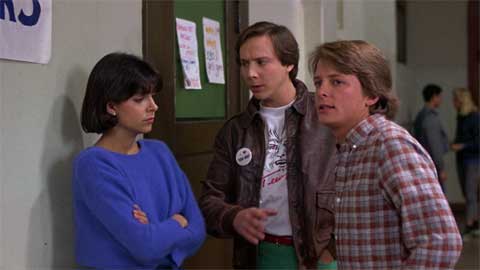 I guess I enjoy that unconventional twist in the film enough to ignore the obvious lazy stereotypes, somewhat hackneyed sports plot driving the goings on, and the wildly unrealistic take on school theater (Why is there literally no one at those rehearsals beside the director and Pamela?? Creepy). But there are enough funny characters – the great Muppet writer Jay Tarses as Coach Bobby Finstock and Jerry Levine’s cashing in pal Stiles of the great t-shirts – and rooting-for-the-underdog drama to hopscotch through these standard tropes. 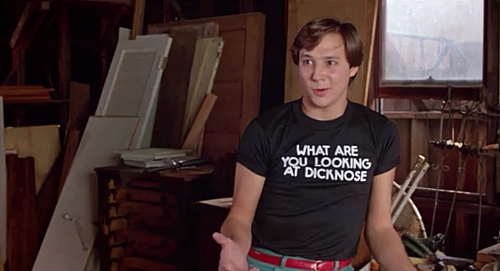 Now, you may be reasonably asking yourself, “Is this fucking idiot for real?” And that’s a fair and measured response to all that is written above. But have you considered the idea that maybe you should SHUT UP? Sure, I’ve done a lot of logical gymnastics to arrive at this extensively extrapolated theory about the construction of this film and the various levels it’s working on. I have no doubt – no doubt whatsoever – that the end product of this motion picture and its multi-faceted insights into the human condition in American society is a result of pure, magical happenstance. There is no way they planned to embed this much genius in this half-assed I Was a Teenage Werewolf knock-off. But sometimes, in spite of intention and/or prolonged apathetic decision making, something resembling brilliance can be concocted where no individual elements are even outwardly interesting.

That, my friends, is Teen Wolf. Lightning in a goddamn bottle. We will never see its like again.

Unless you studio types hit my DMs – I’ve got ideas.

Coming tomorrow! You’re going to go through life thinking that girls don’t like you because you’re a nerd. And I want you to know, from the bottom of my heart, that that won’t be true. It’ll be because you’re an asshole –

One response to “The Set of 400: #60 – My Favorite Underage Alcohol Purchase”